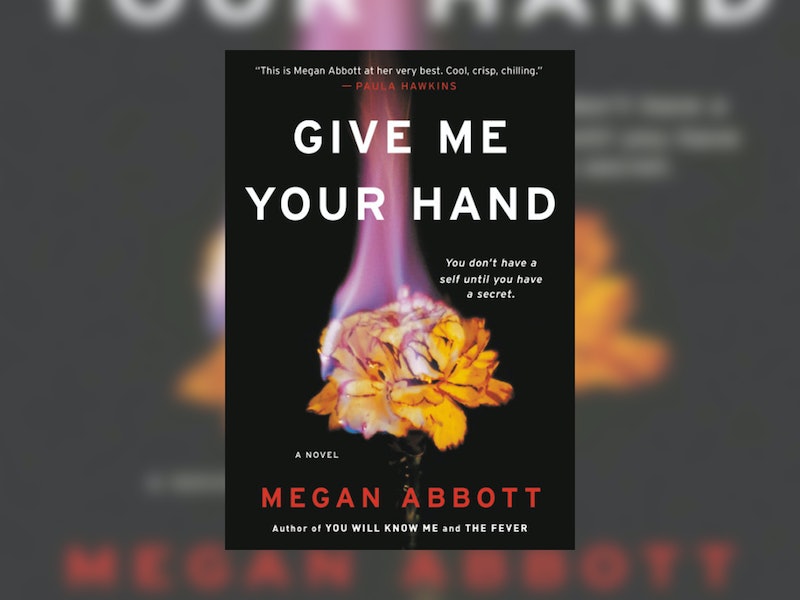 If there's one thing you don't see enough in books and movies and TV shows, it's the female period. Blood? Yes, you see that often — gushing out of screaming women in slasher movies or pooled around the corpses of murdered teenage girls in crime procedurals. Of course, you see blood running from the bodies of "dead girls," but how often do you see menstrual blood flowing — freely and openly — from a breathing woman with feelings and dreams and pain and repulsions and shame and love? Too infrequently.

In the new novel, Give Me Your Hand, Megan Abbott writes about female blood and the havoc it wreaks upon live women through her exploration of a little-known condition known as PMDD — premenstrual dysphoric disorder, a severe form of PMS that researchers believe affects between three and eight percent of people with female reproductive systems and can lead to extreme physical pain and emotional and mental duress. ("A PMS that makes you want to die," as Broadly described it in a 2015 article.) In Abbott's book — and in real life — PMDD has been used as defense for women accused of brutal crimes, even murder.

Give Me Your Hand centers on two women — Kit Owens and Diane Fleming — both brilliant scientists and postdoctoral students who are in fierce competition with each other for two open positions with their supervisor, Dr. Severin, who has just secured a large grant to research PMDD. Unbeknownst to Dr. Severin or the other researchers, Kit and Diane have a history with one another — they were friends as teenagers, until Diane revealed a dark secret that has haunted the other woman ever since. The novel flashes back-and-forth between the present day — where a series of murders rocks the laboratory where they both work — and the past — where Diane and Kit are adolescents coping with the affects of whispered secrets and unspoken rivalries.

Give Me Your Hand by Megan Abbott, $21, Amazon

Though Kit is loosely positioned as the "hero" of the story, neither woman is blameless in the crimes that take place, and both are equally repulsed and seduced by the recognition of their baser, more brutal traits in the other. In this book, the murder isn't the mystery — the women are the mystery. They confound each other and themselves, and the conclusion of Give Me Your Hand only comes when they — and you, the reader — recognize that their outer selves badly reflect the secrets, rage, pain, and ambition that lie within them.

It's truly the beginning of the golden age of Megan Abbott: Give Me Your Hand is currently being adapted into a television show, as are two of her previous novels: You Will Know Me and Dare Me. Ahead of the publication of her newest novel, I spoke to Megan Abbott about PMDD, villains, and about the role of "dead girls" in literature — here are five things I learned: