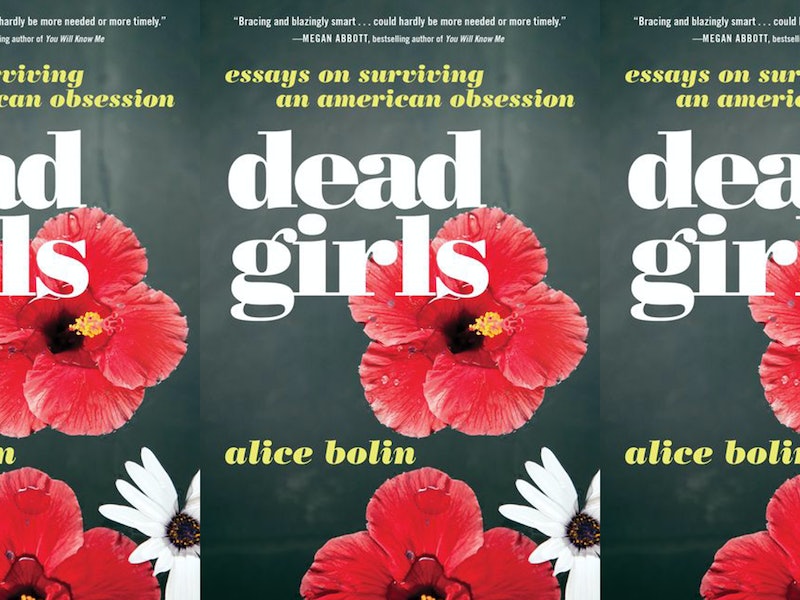 From Serial to Veronica Mars, True Detective to Pretty Little Liars, Making a Murderer to Dateline NBC, it is safe to say that America has a Dead Girl obsession. In her debut essay collection Dead Girls: Essays on Surviving an American Obsession, writer Alice Bolin examines this lasting cultural fascination with murdered women in pop culture and in literature. With subtle humor and a sharp critical eye, she explores the troublesome tropes that leave women abused, silenced, and discarded in thousands of books, movies, TV shows, and even podcasts, revealing that, more often than not, the Dead Girl is merely "a neutral arena on which to work out male problems."

Throughout her collection, Bolin attempts to unearth a kind of cultural lesson from shows like Twin Peaks and books like The Girl with the Dragon Tattoo, in which the murdered or disappeared woman isn't a fully formed being but rather a prop male characters can use to help them solve some internal or external conflict of their own. The Dead Girl trope, Bolin argues, can actually teach us a lot about ourselves and the stranglehold misogyny has on American society as a whole — but so too can those rare instances of female survival. In her essay "A Teen Witch's Guide to Staying Alive," Bolin reveals one told women can use to escape the fate of the Dead Girl: magic.

"My first formal dalliance with witchcraft was in fourth grade, though my suspicious that I was magic came much earlier," Bolin writes in her essay, echoing a feeling shared by many girls who grew up in the '90s with Charmed, Buffy the Vampire Slayer, The Craft, and Teen Witch. "As a small child, I would tighten my concentration on objects, thinking I might move them with my mind. I engaged in experiments in mind reading, which if you don't let your subject in on it, is easy to tell yourself you are doing successfully. At the same time I also engaged in schoolyard charlatanism, shoving the planchette around when we played with the Ouija board and convincing a gullible friend that I communicated with leprechauns, a ruse that went off so well I had to continue it for years."

Like a lot of women who came of age in the 1990s, myself included, Bolin was drawn to the idea of herself as a teen witch, someone with the power to control not just themselves, but their circumstances and those around them. In a culture in which young girls are constantly stripped of their voices and their power, the prospect of magic is beyond appealing. It's a necessary tool for survival. That is why generations of women have turned to it, not just as wannabe teen witches or practicing Wiccans, but as readers and consumers of pop culture, too. "The imagination as the source of childhood 'magic' is the cliche that drives basically all youth entertainment," Bolin explains in her essay. "In that case, magic means nothing more than control."

The pull of the teen witch is something a lot of women can relate to, and it's also a powerful trope that shows up across the literary landscape. Witch stories are, at their core, feminist narratives about women reclaiming their power and regaining their control in a world that relentlessly attempts to do the opposite.

Take one of the most famous literary teen witches, Merricat Blackwood from Shirley Jackson's classic We Have Always Lived in the Castle. Though she may be a murderer who uses a kind of botanical magic to kill her family, Merricat remains the heroine of the story because her motives aren't sinister at all. They are about self-preservation, and sisterly love. As Bolin explains:

"She wants to protect herself and what's left of her family — her older sister, Constance, and her feeble uncle, Julian — from the ignorant townspeople in the hostile village beyond their land. Merricat is one in a long line of literary tomboys, taking her place beside Scout Finch, Harriet the Spy, and Jo March. But Jackson twists this archetype, imbuing her tomboy with a sinister mixture of alchemy and fear. When Merricat's routine is threatened early in the book, she immediately reacts by smashing a milk pitcher, as smashing things into glittering shards is one course of her power. Her feral girl magic is far from RavenWolf's benign Teen Witches. We learn that someone poisoned her father, mother, younger brother, and aunt years earlier, and Merricat is the reader's only suspect. This is Jackson's unseasy feat in the book: readers' sympathetic intimacy with our strange and murderous narrator."

Despite her obvious flaws and unlikability, Merricat wins the heart of the reader, largely because of Jackson's masterful portrayal of her as a young girl desperate for control over a life she sees as spiraling out of her hands. Like so many other teen witches in literature and in pop culture, Merricat's powers are deadly and destructive, but don't they have to be in order to effectively compete with the death and destruction of misogyny?

The teen witch is not the perfect character, but she offers an irresistible alternative to the Dead Girl trope. She may abuse, she may kill, but it beats being abused and being killed. As Bolin points, Miranda from Helen Oyeyemi's White Is for Witching fills the same kind of role. The novel, Bolin writes, "proliferates indecisively with references to myths and fairy tales, not sure if Miranda is a wicked witch from Western fairy tales or the soucouyant, the evil hag in Caribbean folktales who eat children's souls. She is either Alice in Wonderland, Eurydice, or Narnia's White Witch. Or she might be an inversion of one of these familiar stories, a princess trying desperately to escape her fairy godmother."

Bolin admits that these roles fictional women like Miranda and Merricat, play are "imperfect or failed strategies for living while female," but they certainly beat the alternative: the Dead Girl, the prop, the tool. As Bolin explains, "It's clear that if both good and bad witches are going to find ways to survive, their methods will not always be ones we approve of, but they are effective methods nonetheless. In these stories, women are not just vessels for men's issues. They are their own ships, and in charge of their own navigation.

As they do in fiction, girls and women in real life long to have the magical powers of protection and self-preservations. That is why so many of us have laid our fingers on Ouija boards and pushed for the answers we want. It's why as teens we picked up spell books like Silver RavenWolf's iconic 1998 book Teen Witch in search of charms like the Chameleon Spell. "It is a meditation exercise, in which the spell caster must memorize a magic poem, 'then practice making the edges of [herself] fuzzy while chanting the poem.' This spell is, in other words, the same thing that girls do in hallways, classrooms, and walking down the street: close their eyes and pray to be less conspicuous, less exposed," Bolin writes. "This is why We Have Always Lived in the Castle's fairytale ending is so moving. Jackson's weird sisters achieve what every teen witch seeks: if not love, at least invisibility."