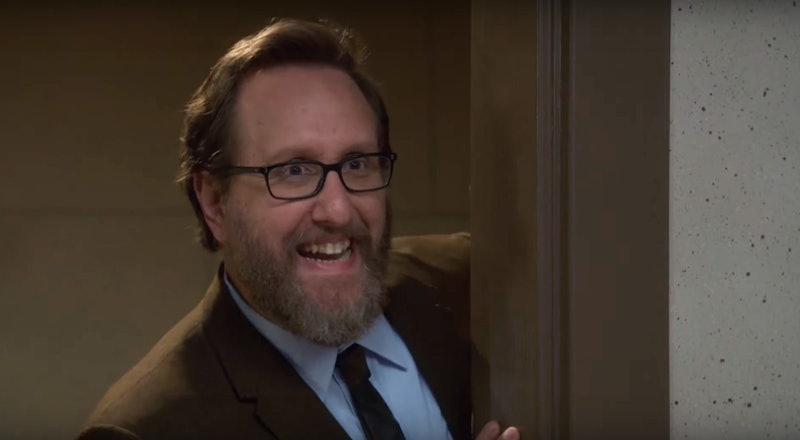 Spoilers ahead for Season 4, Episode 4 of The Good Place. Last week's episode of The Good Place ended with a grim reaper-like figure approaching on the train tracks, and now, we know who he was: Glenn the demon. On the Oct. 17 show, he arrives claiming he's a traitor come to foil yet another Bad Place scheme, and reveals that Michael isn't Michael, but rather Vicky in a Michael suit. His intel turns out to be wrong (Michael does indeed seem to be the real Michael), but his apparent betrayal is still significant: it could change everything for the humans' so-far-failing experiment.

Glenn (who is, to use an extremely popular term at the moment, sort of a whistleblower) has caught on to the idea that the humans are trying to prove: not everyone in the Bad Place is horrible. Instead, they've just been screwed over by a flawed points system.

"I loved to torture humans, because I thought they deserved it," Glenn explains to Eleanor, Tahani, and Jason. "They said everyone in the Bad Place was evil and beyond repair. I don't know if I believe that anymore." (Also, he adds, "Shawn is so mean, guys.")

Glenn might now be a pile of slime slowly reassembling himself (thanks a lot, Bad Janet), but if there are more demons who are thinking the way he is, then the humans could find themselves with some supporters in the Bad Place — and that could be just what they need to convince the Judge that people are being unnecessarily sent to eternal damnation.

Given how things have been going with Chidi, Simone, John, and Brent so far — little progress and incessant meddling from the Bad Place — it seems unlikely that the experiment alone will lead to the point system being restructured. Demon supporters could be helpful, because if, as evil beings whose sole purpose is to torture people, even they don't believe what they're doing is right, that's kind of a big deal that could go a long way in swaying the Judge's opinion.

Of course, not all demons are going to be onboard. Vicky, Shawn, the guy who loves ripping off his shirt, Bad Janet, and plenty of others are hell-bent on keeping things the way they are. They're trying anything they can to hold on to their way of life — well, their way of torturing — because they know it could be taken away from them. There was the thing with "Linda." The fake Michael suit. The Bad Janet scheme. The Bad Place is trying and failing to keep torturing the humans and ruin their plan. But while they've been somewhat successful in stalling them, Eleanor et al have proved to be rather resilient. They may not yet have been able to figure out how to help the four new humans become good, but Glenn coming them could be the break in the case they've been waiting for — or at least a good motivator to keep trying.