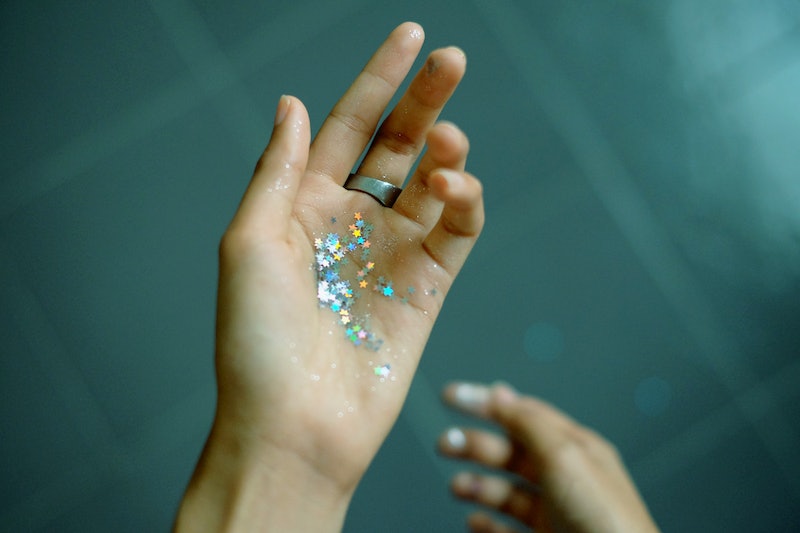 Have you ever felt like your lady bits were missing a little something-something? A capsule filled with flavored glitter dust, perhaps? Hopefully, your answer is a resounding "nope," because glitter-bombing your vagina is more than just a sign that the unicorn trend has gone to far. According to medical professionals, it may lead to a whole range of health problems. That kind of defeats the purpose, don't you think?

Apparently, capsules containing candy-flavored sparkle dust are being sold online as a sexual novelty. Designed to be inserted into the vagina, the capsules supposedly dissolve inside your body, releasing a bunch of edible glitter and making your lady business taste like something dreamed up by Willy Wonka. On top of playing into insecurities about how vaginas "should" look and taste — spoiler alert: they're supposed to look and taste like vaginas — several doctors have spoken out online against using the glitter capsules.

Dr. Jen Gunter, a San Francisco-based gynecologist known for debunking gynecological myths and trends, wrote an entire blog post warning against glitter-bombing your private areas. If the glitter is cosmetic grade, she writes, then the goo is filled with tiny bits of plastic that could be a "nidus for bacteria," much like sand. They may also rub against the walls of your vagina and produce granulomas, or masses of tissue that form in response to a foreign body.

If the glitter is composed of sugar, on the other hand, this may seriously disrupt the delicate balance of bacteria living in your lady bits. "Depositing sugar in the vagina lets the bad bacteria go wild," Dr. Gunter wrote.

Speaking to the Independent, gynecologist Dr. Vanessa Mackay agreed. "If women place foreign objects inside their vagina, they risk disturbing this balance which may lead to infection, such as bacterial vaginosis or thrush, and inflammation," she told the news site. Both of these are common enough infections, but is a glittery vagina worth the discomfort?

Then there's the effect glitter-bombing could have on your pH balance. The glitter is suspended in goo that may raise the pH of your naturally acidic vagina, and the added sugar may encourage certain types of bacteria to grow, bringing us back to the whole bacterial imbalance business. Dr. Shazia Malik told the Independent that that this may cause "increased discharge and a painful inflamed vagina, which causes painful intercourse."

On the other hand, not all predictions were quite so dire. One gynecologist told Yahoo News that glitter-bombing is "not likely dangerous," but she added that it's unlikely that the ingredients involved have been scientifically tested for vaginal use.

It's also worth noting that there are already plenty of improbable beauty trends implying that women aren't good enough on their own. Do our vaginas really need enhancing, too? (No, they do not.)

So, to recap: Glitter-bombing your lady bits might leave tiny scratches on the inside of your vagina, disrupt its pH balance, and change the composition of your bacterial colonies. Given that the vagina already relies on a delicate balance to function normally, I'll stick to traditional, non-glittery sex, thank you very much. Nothing kills the mood faster than an unhappy vagina.