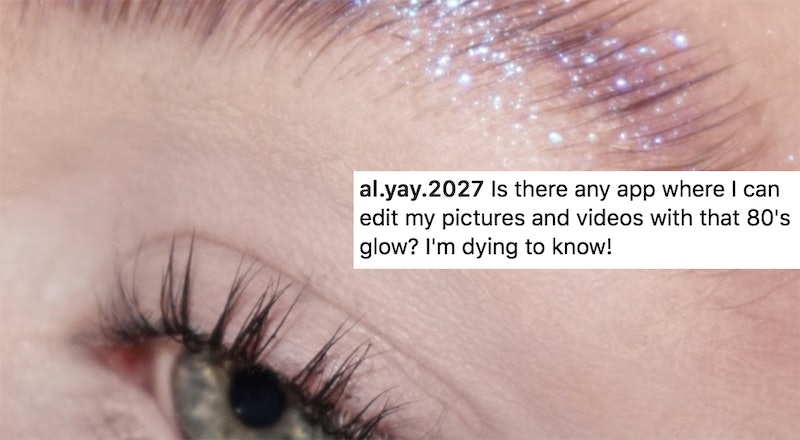 Color trends and quirky makeup tools come and go, but one thing is forever — glitter. As Allure found, YouTuber Holly Aldous created glitter brows that are so great that people thought it was Photoshopped. This is the start of an incredible Instagram trend, and you'll want to recreate it right after you see how wearable they are.

The thing about glitter is that it's all about the application. While almost every brand has something glittery in its makeup arsenal — heck, glitter face masks are even a thing now — not all shimmer is created equal. The key to Aldous' look is using the right glitter and technique to get a result that is so good that people don't even think it's real.

You'll se exactly why when you see the Instagram photo. The look features combed up brows with a holographic shimmer on top of them. It's the perfect balance of natural and a little extra.

"I was extremely bored of doing the same kind of looks with eyeshadow," Aldous tells Allure, "so I decided to make my brows the focus of the makeup look instead."

Brows are definitely the feature, but without being totally unwearable. The glitter brows are airy and light while still being showstoppers at the same time. It shows up gorgeous on camera too.

According to Allure, just about anyone can nail this trend. The looks is extremely easy to get. It all just comes down to the correct application and the right products. Although the YouTuber hasn't done an on-screen tutorial for the look that has racked up over 7,000 likes, she did give a step by step to the publication.

It all starts with something that might not already be in your beauty bag — soap. Aldous combs soap through her brows before applying any other product, according to Allure.

"I used the spoolie to brush the soap through and upwards to keep the brows in place," she told the publication.

Then comes the shimmery product — Lime Crime Diamond Crusher Lip Topper in Unicorn Queen. It's a violet shade with a pink shift that stands out, but also looks super natural. It's also not a chunk glitter, which is what makes it look so effortless.

"I love the Diamond Crushers because they’re more of a liquid than a chunky glitter so are so easy to blend out," she told Allure.

This isn't the only show-stopping look that comes from the YouTuber's Instagram, either. Aldous is constantly creating colorful and unconventional looks. But, just like the glitter brows, she finds a way to make every single one look effortless and completely wearable. This was apparently the first time that people thought that her creation was fake though.

"I had no idea that the post would do as well as it did or that people would think it was a filter," Aldous told Allure. "However, it is quite flattering to hear people think that post is Photoshopped."

She does have some theories on why people think that it's fake though. Because the glitter has pink undertones and a slight shift, it might have been the flash of the camera that has people thinking that it's a social media illusion, according to Allure. Either way, this should totally become a filter, because people would rock these for all occasions.

This is only the beginning of glittery looks that you'll want to recreate after seeing Aldous' social media pages. After all, it's almost festical season, so you'll want to start trying out your techniques before it's too late. Because there's a good chance that glitter will be all over the scene this summer.

More like this
Dua Lipa On YSL Beauty, Plus Her Fearless Approach To Hair & Makeup
By Erin Stovall
All The Products Hailey Bieber Used For Her Birthday Makeup Look
By Olivia Rose Ferreiro
The 117 Best Black Friday Beauty Deals Of 2022 To Shop
By Audrey Noble
M.A.C. Cosmetics' Black Friday 2022 Sale Includes Major Lipstick Deals
By Audrey Noble
Get Even More From Bustle — Sign Up For The Newsletter