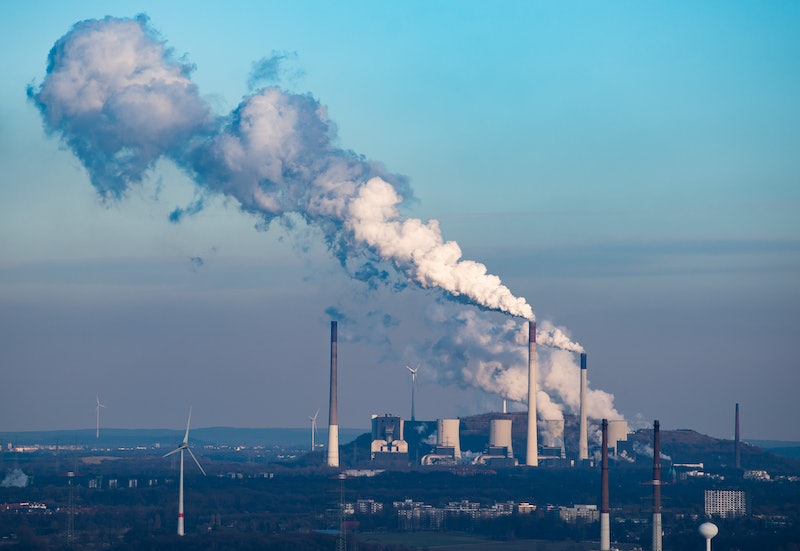 A new report by the Global Carbon Project has shown that global carbon emissions for 2018 shattered a record — and it's terrible news for anyone concerned about climate change. The report states that annual global carbon emissions for 2018 are the highest they've ever been, and that the United States (along with China and India) contributed to this notable increase. What's more, the rise in emissions is largely due to an industry that POTUS champions more than almost anything else: the coal industry.

For those who are wondering if the increase in carbon emissions is just the latest in a consistent upward trend, that's unfortunately not the case. Global CO2 emissions (which are the same as fossil fuel emissions) actually plateaued from 2014-2016. And with the creation of the Paris Agreement in November 2016 (of which the central aim is to decrease total CO2 emissions), it seemed possible that the downward trend would continue.

The news comes as world leaders have flown to Poland for a series of conversations about the international effort to combat climate change. At the opening of the 24th annual U.N. climate conference, United Nations Secretary General António Guterres said bluntly, “We are in trouble. We are in deep trouble with climate change."

He continued, “It is hard to overstate the urgency of our situation. Even as we witness devastating climate impacts causing havoc across the world, we are still not doing enough, nor moving fast enough, to prevent irreversible and catastrophic climate disruption.”

Trump did not attend the conference, though he certainly has an obvious excuse: the funeral exercises for former President George H.W. Bush that have been taking place this week. But disregarding his absence from the conference, it's readily apparent that climate change efforts are being met with resistance in more than one place.

In the United States, the Trump administration received widespread criticism for releasing a 1,700 page report by hundreds of scientists showing the damage that climate change is already wreaking upon the United States on Black Friday, the day after Thanksgiving.

Meanwhile, in France, President Emmanuel Macron chose to pause the new tax aimed at curbing fuel emissions because of the "yellow vest protests" that have taken place in Paris for the last few weeks.

If this news about increased CO2 emissions terrifies you, then one of the most significant things you can do is be an extremely informed voter. But beyond that, you should pay attention to environmentally focused measures being considered in D.C. (the Green New Deal is one that's gaining momentum in both the Congress and the Senate) and make sure you speak up to your local and national reps about supporting those measures.