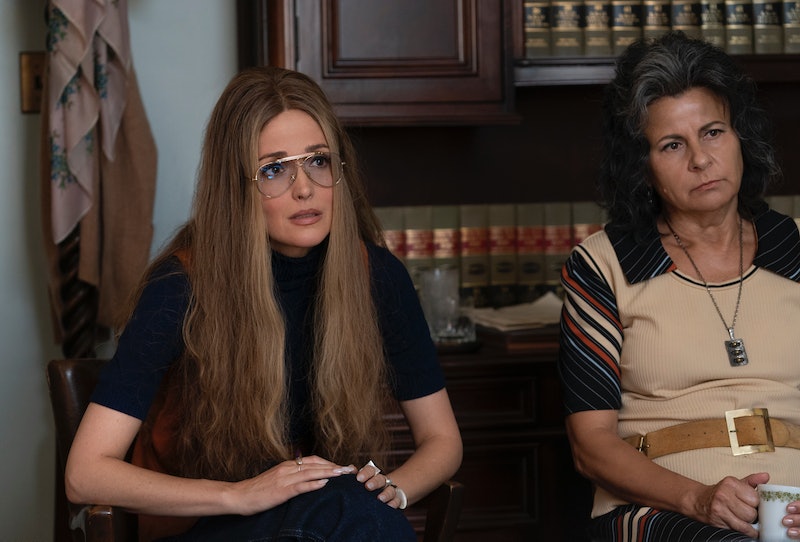 In the most recent episode of FX’s Mrs. America, the simmering antipathy between Gloria Steinem and Betty Friedan reaches a crescendo. Steinem says to ignore grassroots conservative Phyllis Schlafly, who's becoming a threat to passing the Equal Rights Amendment, but Friedan agrees to debate her on an Illinois college campus. The event goes disastrously wrong — Friedan, as she did in real life, calls the conservative icon an Aunt Tom, adding, “I'd like to burn you at the stake,” — and Steinem, as she often did in real life, emerges as the Bigger Person. The episode ends with Gloria (Rose Byrne) phoning Betty (Tracey Ullman) to console her. But it’s a made-for-TV reconciliation that entirely belies reality: the power struggle between Gloria Steinem and Betty Friedan changed the course of second wave feminism, and, at least publicly, neither leader was sorry for it.

If Mrs. America has taken liberties with the relationship between Gloria and Betty, it’s been to render the conflict between them both more ideologically grounded and more directly confrontational. In real life, the battles between Friedan and Steinem were more likely to play out in the press than at a libber’s cocktail party, and their disagreements veered personal.

Take this instructive rally over Steinem’s “superstar” status within the movement, which appeared in a 1972 issue of the feminist magazine off our backs. Both were interviewed for the article, which frames them as "generals in opposing camps.” Friedan alleges the camps are divided by strategic considerations and that Steinem’s brand of feminism threatens to leave less radical women behind (the adoption of a lesbian rights platform was an especially combustible flashpoint between them). For Steinem, though, the rift is entirely a product of personality. “I know other women with whom I have the same ideological differences with whom I can work,” she told oob. They’re unable to find common ground even on the subject of what divides them.

On this matter, Steinem, it seems, was more correct. Friedan had a reputation for being strident — a self-described “bad-tempered bitch” — willing to call out her rivals within the movement, like Steinem and Bella Abzug (played on Mrs. America by Margo Martindale), by name. In her 2000 memoir Life So Far, she faults Ms. founder Steinem for filling the magazine’s pages with “anti-male dictums” while personally dating “very glamorous men” and “having her hair streaked at Kenneth, a very fancy New York salon." Steinem confesses in her own memoir My Life On the Road that she was constitutionally conflict avoidant, though in the '70s she emphasized a different, more virtuous reason for rarely parrying with Friedan. “I don’t think it serves the women’s movement,” she told oob.

Of course, that Steinem felt she could refuse a tangle with Friedan reflects their relative standing in the women’s movement at the time. As Steinem’s biographer Carolyn Heilburn puts it, Friedan considered Steinem “a late arrival on the scene,” reaching her feminist consciousness in 1969, six years after Friedan had published her pivotal book The Feminine Mystique. Steinem may have been late to the party, but she quickly became the center of it, displacing “the Mother Superior to Women’s Lib” as spokesperson of the National Women’s Political Caucus. Around the same time, Friedan accused Ms. of “profiteering” off the movement and later, on a pettier note, refused to shake Steinem’s mother’s hand during an attempted introduction.

Friedan, like Steinem, started her career as a journalist, and in another active slight, was vociferous about her decision to publish in mainstream women’s magazines like McCall’s rather than a lefty title like Ms. “It didn’t interest me to talk to the already convinced,” she wrote in her 1976 essay collection. “I was interested in writing for those 8,000,000 woman’s magazine readers, the suburban housewives, the women who had children and/or jobs, with husbands or without, who still had to deal with housekeeping, meals, and clothes as I did.”

In fact, Friedan accused Steinem — and Abzug — of “female chauvinism” in the 1972 pages of McCall’s, blasting Steinem’s radical feminism for “mak[ing] a woman apologize for loving her husband.” She renewed her critique in the New York Times in ‘73, when she called out lesbian inclusive feminists like Steinem as actual “disrupters of the women’s movement.” The takedown was so scathing, it’s one of the few times Steinem felt moved to defend herself. But despite the offensive, Friedan’s standing was falling. Gloria Steinem was still McCall’s “Woman of the Year” that same year.

In one particularly distracting proxy battle, which has yet to feature on Mrs. America, Betty Friedan joined the Redstockings, a New York feminist group, in insinuating Steinem was a CIA operative, dispatched to infiltrate the movement and incite “divisiveness.” Steinem returned to the friendly pages of off our backs to defend herself, despite misgivings over encouraging establishment newspapers:

“[E]ven a few quotes may result in another round of ‘see-how-women-can’t-get-along’ stories, as when Friedan discussed it at press conferences. (Without well-known women willing to comment on its existence, the regular press hasn’t generally felt its libelous content was worth covering.)”

The truth behind Steinem’s CIA connections has so far turned out to be less salacious and certainly less clandestine: She discussed “work[ing] closely” with the CIA to organize youth festivals with The Washington Post years earlier in 1967.

One aspect of the rivalry it would be impossible for Mrs. America to ignore, of course, is consideration of its characters’ looks. As author Rebecca Traister explained to the New York Times, “Gloria Steinem did not invent feminism... She was a figurehead chosen by the media for complicated reasons. She was young and white and pretty, and she looked great on magazine covers.” Meanwhile, Friedan’s looks were often denigrated. “Draw your own conclusions about the relative potency of Friedan’s physiognomy as compared with Steinem’s,” wrote one especially crude observer.

That the women's liberation movement's most famous rivalry could so often skew personal doesn't mean its consequences weren't gravely political. Friedan was the middle-class wife and mother she had written about in The Feminist Mystique, back when Steinem was still single in her late 20s. Steinem's "victory" ultimately moved the National Women’s Political Caucus to the left of where Friedan would have positioned it, but both leaders could be charged with the same ambition: To create a movement that appealed to the woman they understood best.