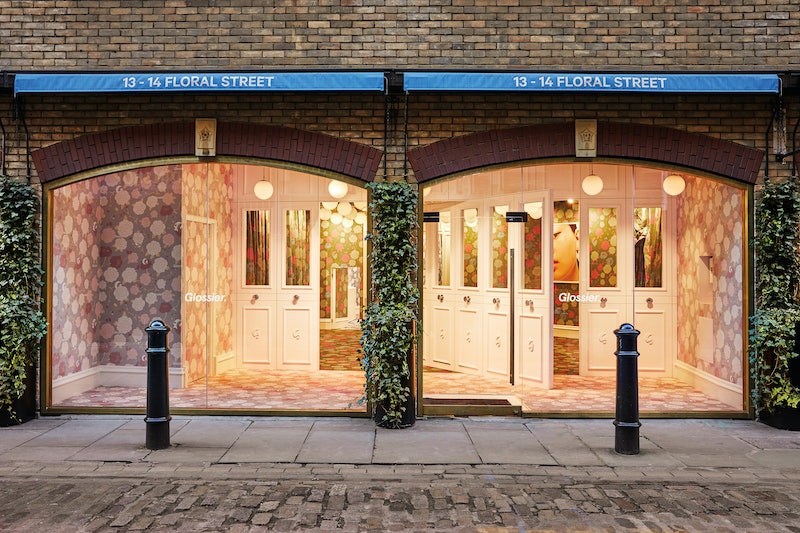 If you're a fan of Glossier (and let's be real, who isn't?!), you'll be fully aware that in Autumn 2019, the brand opened a pop-up store in London's Covent Garden. The store was unsurprisingly an instant success, so it comes as zero surprise that Glossier's London pop-up is staying open all year.

The brand has just announced that following the huge attention and footfall the store, which is based on Floral Street, has experienced, they will now be staying open until the end of 2020. The store was initially only due to stay open for a matter of months; it opened its doors in November 2019 and was originally set to close on 9 February 2020.

Impressively, the shop has had over 100,000 visitors since its inception, making it Glossier's most successful pop-up of all time. It also had the highest average daily sales of any of their pop-ups, ever. Pretty major, huh?

As well as being able to test out all of the brand's beloved products, the pop-up has always been popular due to its unique interiors. Each pop-up Glossier designs takes inspiration from its setting and surroundings, and the London store was designed by the brand's creative in-house team. It was inspired by the world of traditional British social clubs, and featured classic architectural details, including a"Glossier Rooftop" in the back room, which is a full-scale installation that pays homage to the iconic London skyline.

The store is also covered in customised Glossier floral patterns, and is ran by "offline editors" who help in-store.

Emily Weiss, the founder of Glossier, has previously discussed her desire to expand her bricks and mortar spaces worldwide, when she told the Financial Times: "Roughly 50 per cent of our followers are international and so we’re trying to get our products into our followers’ hands as quickly as we can."

You can visit the Glossier pop-up store at 13 Floral Street, Covent Garden during 10am-7pm on Monday's to Saturday's, and between 11am and 6pm on Sunday's. Fingers crossed we never have to say goodbye to this beloved space, and that it could become a permanent London fixture...