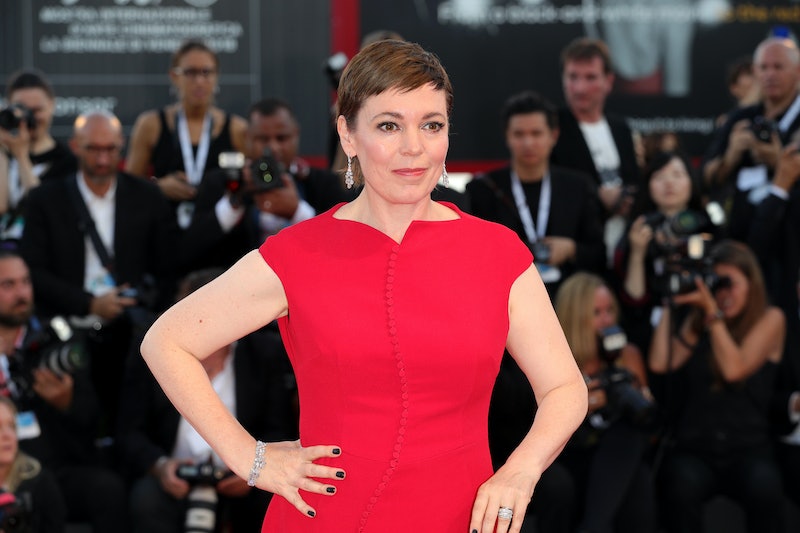 What would you do directly after winning one of the UK's most prestigious acting awards: order the largest available bottle of champagne? Make the extravagant purchase you've been fantasising about for years? Party until the wee hours? Turns out Golden Globes favourite Olivia Colman plumped for a slightly more low-key celebration after her double win at the 2013 BAFTAs. After scooping awards for her roles in Accused and Twenty Twelve, Colman went home, took off her Spanx, and had a nice cup of tea. And honestly, has a certified Hollywood icon ever been quite so relatable?

Speaking to the Mirror, Colman reminisced on the May 2013 ceremony that scored her two BAFTA trophies: one for best supporting actress, for her role in crime drama Accused, and one for female comedy performance, after her appearance in satirical Olympic comedy Twenty Twelve. "That was amazing that night because I had been nominated for things before and just never got them," she told the paper. "That was unbelievable. No one expects to get one, but to get two?"

Her success proved a little overwhelming: "It was a little bit too much," she said. "I just needed to be normal and take the massive Spanx off — you know the big pants? — and just calm down. So I went home and had a cup of tea." Sounds lovely, doesn't it?

Colman is favourite to land the Golden Globe for best actress in a comedy or musical at tonight's awards ceremony, for her role as Queen Anne in (appropriately) The Favourite. Co-stars Emma Stone and Rachel Weisz are also nominated for best supporting actress in a comedy or musical, for their roles as royal favourites Abigail Hill and Lady Sarah Churchill. The event, hosted by Sandra Oh and Andy Samberg, will see Colman run against Crazy Rich Asians star Constance Wu, Mary Poppins Returns' Emily Blunt, Eighth Grade's Elsie Fisher, and Tully star Charlize Theron.

And Colman's pretty delighted about the nomination, telling the Mirror, "When you get nominated for something, for me it always comes as a massive surprise and then an enormous, 'Oh.'" She added, "It’s really incredibly exciting and you can’t quite believe it, and in all honesty, as a little girl it’s all, 'Imagine if I won an Oscar?'"

Colman's snagged a Golden Globe before, winning best supporting actress in a series, mini-series or TV movie at the 2017 ceremony for her role in The Night Manager. But there'll be one major difference tonight: this time, she'll actually be at the ceremony. As she explained to the BBC, Colman was due to start filming Kenneth Branagh's adaptation of Agatha Christie's Murder on the Orient Express at the time of last year's awards, and was keen to impress her co-stars — plus, she assumed she didn't have a chance. "I looked at the list and thought, 'I won't win in that group,'" she said.

"I'm playing Judi Dench's maid and I want her to be so impressed because she is my hero. I have to be good and I don't want to be that person who turns up jetlagged but now I sort of think they would have forgiven me," she told the BBC after her win was announced. "Now I'm so gutted I'm not there. It's such an enormous honour, I'm beside myself." Well, if the bookies' predictions prove correct, this time Colman can collect her Golden Globe in person.