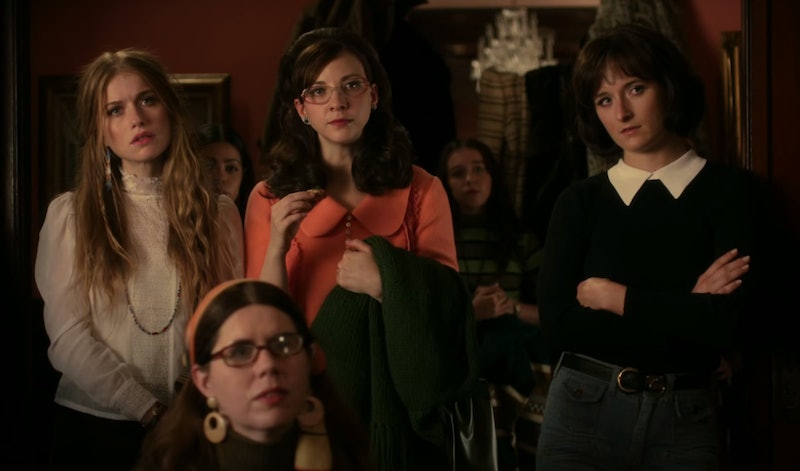 The revolution may still be televised. As reported by Deadline, Good Girls Revolt Season 2 may happen after all, despite the series being axed by Amazon in 2016. Based on Lynn Povich's nonfiction book, Good Girls Revolt chronicles the landmark gender discrimination suit that 46 women filed against Newsweek in 1970. In light of the sexual harassment and assault allegations against numerous men of power in Hollywood, the feminist series seems more relevant than ever. According to Deadline, the show's production company, Sony TV, has received multiple offers from different channels and streaming services looking to revive Good Girls Revolt in recent weeks.

If the series is picked up, the plan seems to be producing a reboot of sorts with the same characters and setting. Rather than pick up where Season 1 left off, Good Girls Revolt would be adapted with the audience of its new home in mind. However, that home could be Amazon once again.

Roy Price, former head of Amazon Studios, resigned after Man in the High Castle producer Isa Hackett accused him of sexual harassment in an October interview with The Hollywood Reporter. Price declined to comment to THR and has not publicly commented on the allegations. He could not be reached by Bustle for comment. However, Amazon addressed the allegations against Price in a statement to THR. The statement read,

"We take seriously any questions about the conduct of our employees. We expect people to set high standards for themselves; we encourage people to raise any concerns and we make it a priority to investigate and address them. Accordingly, we looked closely at this specific concern and addressed it directly with those involved."

Good Girls Revolt series creator Dana Calvo claims that Price never watched the first season of her show, something she figured out during the pitch meeting for Season 2. In an interview with The New York Times, Calvo revealed that Price had her refer to the characters by the names of the actors because "he was unfamiliar." The day after the meeting, Calvo received word that show wouldn't be picked up for Season 2.

In a statement to NYT, Amazon Studios said, "We had high hopes for Good Girls Revolt when it was green-lighted, but it had a low season completion rate, and did not perform well on the service."

The series' cancellation may seem like no big deal on the surface, but Deadline reports that Good Girls Revolt had the second largest debut season for an Amazon show, with only Man in the High Castle logging more views. Among women ages 18-49, 80 percent of viewers reportedly finished the entire first season. Perhaps most importantly, the series about a group of female researchers fighting for the right to have their own bylines proved to have a passionate community of fans that rallied behind the show after its cancellation.

A year may have passed, but the Good Girls Revolt fanbase is still fighting for the show, and the cry for its return is now being heard by people with the power to make it happen. One of those people could be Amazon Studios new head of scripted series, Sharon Tal Yguado. As Price's successor, Yguado has the chance to return Good Girls Revolt to Amazon, and this time to give it an opportunity to flourish.

Now that Hollywood is being forced to face the alleged abuse of power some men in the industry have been wielding for far too long, a series about sexual discrimination and harassment written by and starring women seems like an opportunity to show the power of women fighting back on screen. Before news of the Harvey Weinstein allegations broke, Good Girls Revolt had already struck a chord with many viewers, and now it has the potential to reach a larger audience that could benefit from seeing second-wave feminists on the front lines of the fight for equality.

Fans of Good Girls Revolt will be happy to know that the stars of the series seem just as excited by the possibility of the show's return as viewers are. On Friday, star Genevieve Angelson tweeted,

"You are literally clapping our tinkerbell back to life. But no lost boys, just women who know what the f is up. Atta girl, persisterhood #goodgirlsrevolt"

Meanwhile, her co-star Grace Gummer retweeted the news of a potential revival, as did Anna Camp. The cast hasn't stopped rallying behind the fans who are so passionate about the series, with Camp encouraging them to tweet about the show and even tweeting about Price's resignation, writing, "He cancelled #goodgirlsrevolt a show about sexual discrimination and harassment in the workplace." It certainly seems like the love that Calvo and the stars have for their series has never waned, and their commitment to keeping Good Girls Revolt alive may finally pay off.

Joy Bryant, who played Eleanor Holmes Norton, the real-life woman who represented the women who sued Newsweek, summed up the importance of Good Girls Revolt in her recent interview with NYT. Bryant said,

"All the actors who worked on the show understood the importance of what we were doing, and how we really needed to honor the story and honor these women."

Whether it continues at Amazon or somewhere else, it sounds like the Good Girls Revolt is just beginning.