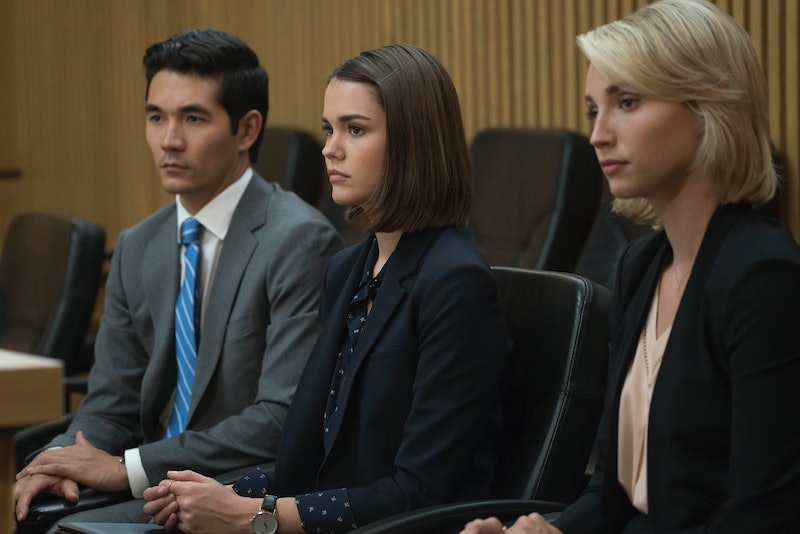 Viewers of Good Trouble should have known from the jump that Callie and Mariana were about to get themselves into some sticky situations — the “trouble” is there in the name. While the two sisters had plans of their own when moving to Los Angeles, they didn't really seem to expect some outside factors to trickle in. For Callie, that unknown variable turned out to be Ben, one of her fellow clerks who has the potential to be a thorn in her side. It’s still too soon to tell if a friendship with Ben will hurt or help Callie and her chances at wowing Judge Wilson, and that’s what Good Trouble actor Ken Kirby finds so appealing about his character.

“He’s a complex character,” Kirby tells Bustle by phone. “On the surface, he would appear to be someone Ivy League, Harvard grad, someone that will do whatever it takes to seek the judge’s approval and further his career and get ahead in life.” What interests Kirby, the actor says, is figuring out where Ben will draw the line in his self-advancement. “How far are you willing to go and what are you willing to do to get there..? Where do your friendships lie? At the end of the day, if you are so focused on career and yourself and achieving these things, who is going to be left to share those moments with?” Kirby asks. It's something Callie is struggling with, too.

The Jan. 29 episode of Good Trouble ends with one heck of a cliffhanger — Ben realizes that Callie actually does know Malika, the woman who is on the other side of their riveting police brutality case. Callie realizes that Ben knows, too, and the distress on her face at the end of the episode is telling, because Ben could blow up her whole career if he tells Judge Wilson. Whatever Ben’s decision is, Kirby says that it doesn’t necessarily come easy to the young lawyer.

“You’re going to find out what Callie and all of us are willing to do in order to do the right thing and further ourselves in the judge’s eyes.”

“I don’t know if he is set [on tattling], and I think that’s up to the audience to figure out… technically, there is an inappropriate thing happening there, and he does have legal standing as far as what’s right and wrong. He is actually sussing out something that is wrong,” Kirby says. But in the grand scheme of weighing the personal and professional, Ben could be more stuck that viewers will give him credit for. The stakes are high here. If he tells Judge Wilson the truth, that Callie could be ethically compromised, he could get the case, which is a career-maker. If he doesn’t, the judge could still find out and fire them all. He will get to keep Callie as a friend, but Ben seems more set on his job these days.

And once Ben makes his decision, it’s not going to be easy. “Limits will be pushed, and you’re gonna see where allegiances lie and especially on this side, the court case is only going to get deeper and deeper,” Kirby says. “You’re going to find out what Callie and all of us are willing to do in order to do the right thing and further ourselves in the judge’s eyes.”

Part of the chip on Ben’s shoulder, Kirby says, and his need to heighten himself for Judge Wilson, comes from his upbringing, which is not nearly as privileged as the other clerks. Rebecca, the third clerk in the bunch, is a Senator’s granddaughter, and she used her family connections to get to where she is — it was much easier for her. Expect to find out more about Ben’s backstory, too. “As we go, we’ll find out more about what makes him tick and the family pressures and having to be that man of the house, taking care of everybody,” Kirby explains. “He probably has the picture-perfect life planned out ahead of him, and life isn’t perfect.

Ben is constantly seeking approval from Judge Wilson (“Judge Wilson does not like to give Ben the benefit of the doubt,” Kirby says), making Ben all work, no play, and quite the dull boy. But there is room for some sort of interpersonal play later on Good Trouble.

“I can say that at some point, everybody finds themselves in and out of a relationship of some sort. As the season progresses, you’re going to see some potential interests come in for Ben, and how those develop we’ll just have to wait and see,” Kirby says. What a tease.

While Kirby can’t say much on exactly what happens on the rest of Season 1 of Good Trouble, he’s animated in speaking about the diversity and kindness of the cast and crew, notably the number of Asian actors Kirby works with every day.

At the end of the day, Ben’s background and hunger for better combine on Good Trouble into one complicated character, which Kirby relishes. “Why is the hustle there? What makes him tick? That’s what drew me to him,” he says. That’s also what’s also drawing Good Trouble viewers to tune in, too, week after week.