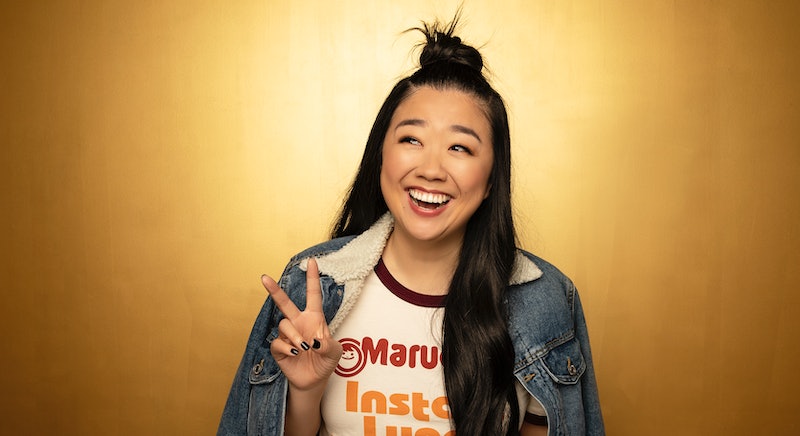 Consider, for a moment, the “mom” in your friend group. The one who seems to always make the brunch reservations or reach out when one of you is feeling low. They’re probably the friend who seems like they have their whole life together, even if the reality is as far away from that veneer as possible. It’s something they probably talk to their therapist about: that they feel so out of control in their own life, they take care of everyone else’s. In Freeform's new The Fosters spinoff Good Trouble, that role goes to Alice (Sherry Cola), a 20-something apartment manager who is nervous, eager to please, and so unsure of her life, it feels as if she might splinter at any moment.

Alice is dealing with a lot: She has recently gotten her heart broken by an ex-girlfriend, eats cake with her hands to cope, and feels pressure because she's not yet out to her mother. Yet there she is, teaching Callie (Maia Mitchell) and Mariana (Cierra Ramirez) the rules at the apartment complex, known as the Coterie, helping them turn a rented room into a home, and showing them what it means to not just live in downtown Los Angeles, but truly thrive. You get the sense that, as she’s teaching her two new roommates what she knows, Alice is teaching herself a few valuable lessons, too. After all, asking someone in their 20s to know what they’re doing with their life is a high order, and sometimes the best way to figure things out is to learn as you go. It helps when you have friends joining you along the way.

“She’s just such a pure, sweet girl. She’s extremely apologetic and nervous and just uncomfortable in her own skin,” 28-year-old Cola tells Bustle. “She's kind of scared to speak up for herself, and there are moments where Alice really wants to take care of people and she puts them before she puts herself.” While Cola admits that she’s more outspoken and outgoing than her on-screen counterpart, she can relate to the desire to make sure everyone is happy; the Good Trouble cast, she adds, has called her “mom” in their group chat. Yet sometimes that desire comes at the expense of self-care, and Cola is learning a lot about setting boundaries, especially as her schedule fills with more and more work.

Like her character, Cola has been on a journey of self-discovery for what feels like her entire life. She first got involved in talent shows and film clubs while growing up in the San Gabriel Valley, just outside of Los Angeles proper; the idea that she could turn acting into a career never crossed her mind. She later majored in Entertainment Studies at California State University Fullerton; even then, she didn’t realize that perhaps her hobbies could lead to a career. “Looking back, it's like whoa, I should have been trying out for the musicals in high school. Why didn't I? All of it makes so much sense now,” she admits. “But I just didn’t see it.”

It was at Fullerton that Cola got involved in campus radio, which led to working first with the AMP Radio street team, then on their social media, and later being given her own show. “I could be funny in between songs and shine my personality that way,” she remembers of the job, which led to stand-up gigs, and, later, acting on shows like I Love Dick and Claws. “I feel like every single time I do something new, it's a glass of water. Like, how have I not been doing this my whole life?,” she says. “When I first started doing stand-up I was like, 'Wow, overdue.' When I started acting I was like, 'This is where I belong.' I feel like I'm catching up to what I should have been doing.”

Perhaps one reason why she didn’t consider performing as a possibility is the fact that she rarely saw people she could relate to in mainstream pop culture. She points to the USC Annenberg study that examined 1,100 popular films released between 2007 and 2017; only 6.3 percent of speaking characters were of Asian descent, and few films featured LGBTQ+ characters with speaking roles. Cola herself is bisexual, and portraying Alice’s journey with her parents hit home for the actor.

“I never saw a character like Alice on the screen. Never. At least, enough to make an impact on me,” Cola says. “Maybe there were smaller characters here and there, but Alice is one of the leads and actually has very tender, relatable, raw stuff she’s going through.” When asked if she would have perhaps considered acting had she seen her own intersections represented on screen, she pauses for a moment before saying yes. “I feel like it would have been a bigger push of, 'Hey, this is possible. Just go for it,' as opposed to just having it in the back of my head,” she says.

“I think about how Sandra Oh and Lucy Liu and Margaret Cho have been in the game for so long,” she adds. “For them to see this new wave, which is here to stay? For them to see the world finally catching up?” Now, Cola says, she hopes to join her contemporaries, including Constance Wu and Jeannie Mai — and she can’t help but shout out Crazy Rich Asians and To All the Boys I've Loved Before, too. “That's an Asian-American female lead in a rom-com. What?!” she exclaims.

Fans are already beginning to take notice of Cola's Alice, and are reaching out to her to share their own stories. “I do get DMs about about how it's so nice to see this character on the screen,” Cola explains. Having that kind of impact, and serving as a reflection for people who may have never had it before, has raised the bar for the kind of work she hopes to do in the future.

“One of my friends from an old job told me I’m proving that dreams can come true. And it's like, whoa, this is dope,” she says. “And that's the point. You do want to show people like, yo, there's room for everyone. Opportunity is everywhere and you can definitely accomplish what is on your vision board.”

For Cola, that board features both acting and stand-up, as well as following Good Trouble viewers as they watch Alice and the rest of the Coterie navigate the absolute mess that is your 20s. “You will see an evolution,” Cola promises. “Alice is taking so much responsibility and she's bottling so much emotion. You're like, 'Oh my God, she’s going crack.' You'll definitely see a nice arc of her finally standing up for her for herself, and expressing herself.” It’s the kind of lesson you often have to learn on your own, and one that both Alice and Cola — and hopefully many viewers — are learning together.

More like this
Josh Peck Shows Love To Jennette McCurdy After Her Shocking 'iCarly' Revelations
By Radhika Menon
An Ultimate Guide To The Music Of 'Rap Sh!t'
By Brad Witter
Steve Martin Hints That He May Retire After 'Only Murders In The Building'
By Jake Viswanath
Jane Lynch Revealed Why She’s Leaving 'Funny Girl' After Lea Michele Was Cast
By Grace Wehniainen
Get Even More From Bustle — Sign Up For The Newsletter