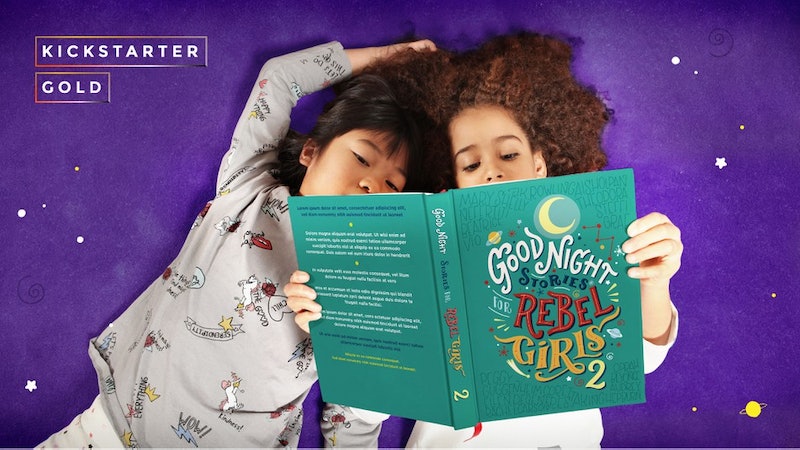 More than 15,000 backers have raised nearly $900,000 for the most-funded publishing Kickstarter, a book for "Rebel Girls." Good Night Stories for Rebel Girls 2 raised $866,913, shattering the record set by its predecessor, Good Night Stories for Rebel Girls, which drew in more than $675,000 last year. The new book is expected to ship later this year, and is available for pre-order today.

Good Night Stories for Rebel Girls 2 met three of its stretch goals, including one that will donate 800 free copies of the book to St. Jude Children's Hospital. This follows in a tradition begun with the first Rebel Girls book, 400 copies of which were donated to Read to a Child as part of that campaign's $400,000 stretch goal.

The new most-funded publishing Kickstarter features 100 new stories about inspiring and diverse women, including Nefertiti, Frida Kahlo, Serena Williams, Aisholpan Nurgaiv, Beyoncé, and the women who inspired Margot Lee Shetterly's Hidden Figures: Katherine Johnson, Dorothy Vaughan, and Mary Jackson. Each woman is depicted in a portrait created by one of 70 female artists from all across the globe. According to the Good Night Stories for Rebel Girls 2 Kickstarter campaign, all of the stories contained in the new book were submitted to the creators at Timbuktu Labs by fans.

Good Night Stories for Rebel Girls 2, the most-funded publishing Kickstarter to date, is available for pre-order today. The first shipments are expected to roll out in November.