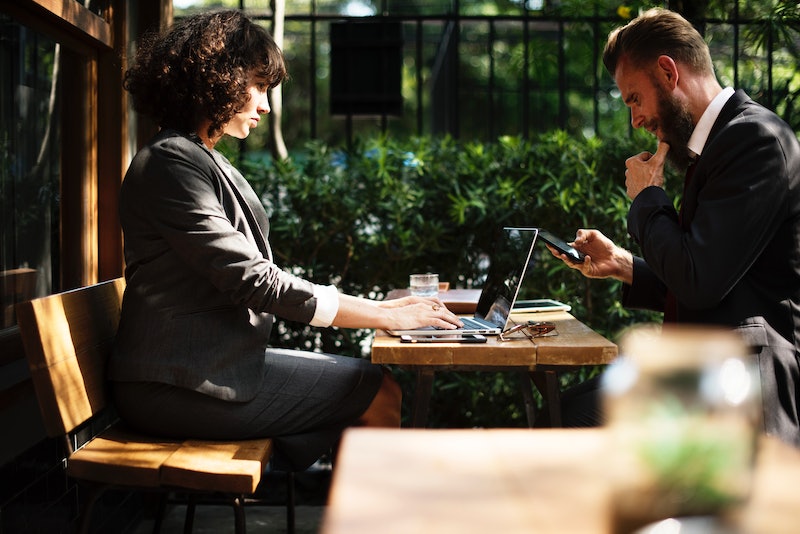 As long as inequality continues to be an issue, the resulting pay gap across all industries is going to stay a hot-button topic. You know what the pay gap is, in essence: women get paid less than men, women of color get paid less than white women, and the difference is more pronounced in certain industries. Experts have different opinions on how best exactly to approach closing the pay gap, but many agree that pay transparency is a pretty strong way to go, and it’s something that employees can start doing right now. A new report from Google employees, provided to the New York Times, reveals how important it is when employees are transparent about their salaries with their colleagues, and how that can help close the pay gap.

For the report, which was started by a former employee in 2015, 1,194 Google employees self-reported their base salaries and their bonuses, and crunched the numbers according to gender and experience level within the company. The data does not take into account the race of the employees or their geographic location, and doesn’t include salary information from executives or high-level engineers. The salary information provided also only comes from about 2 percent of Google’s total workforce, so it’s a relatively small sample size at a relatively large company.

Despite all the variables that this survey would need to take into account in order to provide a comprehensive look at the pay gap within Google, it still reveals some surprising trends. According to the data provided to the New York Times, men on average were paid more than women, and tended to receive larger bonuses. At the mid-levels of employment, however, women received higher bonuses than men, but only by a few hundred dollars. (At the highest levels, men collected around $7,000 in bonuses, so no, it doesn’t equal out in the end.) Again, this data only includes information that is self-reported (meaning it’s not an official estimate by any means), and can only paint a rough picture of the pay gap at Google, and not at any other company or industry.

Yet what this data set does demonstrate on a broader scale is 1) how easy it is to share salary information in the interest of more equitable pay, and 2) why that kind of initiative is so important. Talking about what you make at your company is a protected worker’s right under the National Labor Relations Act, so it’s actually illegal for your company to discourage you from doing so. One reason an employer might discourage you from doing so, it turns out, is because it could lead to more equitable (and higher) pay practices.

In April, the Pew Research Center reported that the pay gap was, indeed, narrowing, “especially among younger workers,” possibly because millennials are more likely than older generations to talk about their salaries. “Millennials are much more open about their lives and their bank account when talking with friends and colleagues. We share our thoughts, concerns and questions about topics others may see as too sensitive,” Cara Silletto, founder and president of Crescendo Strategies, told Forbes in 2016. Knowing what the going rate for your position in your industry is can help boost your case if you go in to ask for a raise. One common myth cited for the gender pay gap, by the way, is that women don’t ask for raises as often as men do, but that simply isn’t the case; they just don’t get as much money as men. So if you’re prepping to get that paper, it helps to have as much information as you can going into that negotiation.

The point is, it can be as easy as an anonymous Google form to track pay discrepancies across gender lines in a given company, so there is no reason to let old-fashion taboos stop you from opening up the salary discussion. Pay transparency might be just the trick we need to achieve equal pay sometime before 2124 — and preferably within our lifetimes.