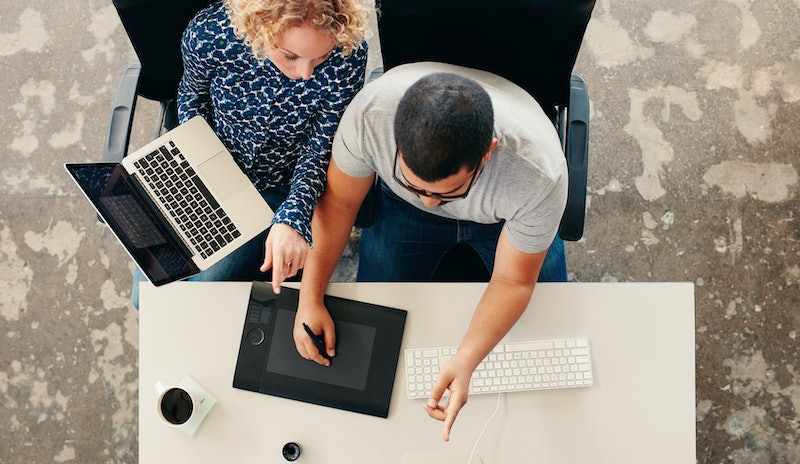 Three things that I try to never think about while getting my blood pressure taken: the wage gap (ugh), men who swear upside down and backwards that the wage gap doesn't exist (double ugh), and — my personal heart attack waiting to happen — men who acknowledge the wage gap, and claim that it is women's fault . Thankfully my sanity has been saved by a recent study showing that women are not to blame for the wage gap (much shock, very gasp!), confirming that it was our BFF internalized sexism all along.

Those in the "lol it's women's fault that they don't get paid as much" camp often cite that women ask for raises less frequently than men or are less likely to negotiate their pay, an argument that "justifies" the wage gap. According to the naysayers, women just plain aren't trying hard enough. The study "Do Women Ask?", conducted by researchers at the University of Wisconsin and the University of Warwick and Cass Business School, debunks these notions like whoa. Data collected from 4,600 Australian employees across 800 different companies clearly shows that women and men show "no difference" in their likelihood to ask employers for more money.

The difference that does persist? Women make 79 cents to men on the dollar, with women of color making even less.

“We didn’t know how the numbers would come out," said study co-author Andrew Oswald, a professor of economics and behavioral science at the University of Warwick, to The Guardian. "Having seen these findings, I think we have to accept that there is some element of pure discrimination against women."

A friendly reminder to anyone who doesn't think this is ~that much of a big deal~: 79 cents on the dollar can be frustrating in the short-term, but devastating in the long-term. It means that over the course of her 40-year career a woman will lose $430,480 in wages — and that's not even factoring in the growth if that money had been put into an IRA or stocks or other savings account, which can also make a massive difference. When you also consider the discriminatory wage gaps people also endure based on race, sexual orientation, size, and disability, the potential calculations are grim AF.

Also, just look at this infographic from Bustle. You think this isn't affecting you right the flip flap paddy whack now? It is, my friend. It is.

In any case, it is bonkers upsetting that we live in a world where a) a massive wage gap exists, and b) we have to conduct massive studies to prove that sexism is a real thing, but mad props to these researchers for working to debunk all the nonsense. In the meantime, let's keep on slaying — knowledge is power (and so is all that extra cash money we more than deserve).