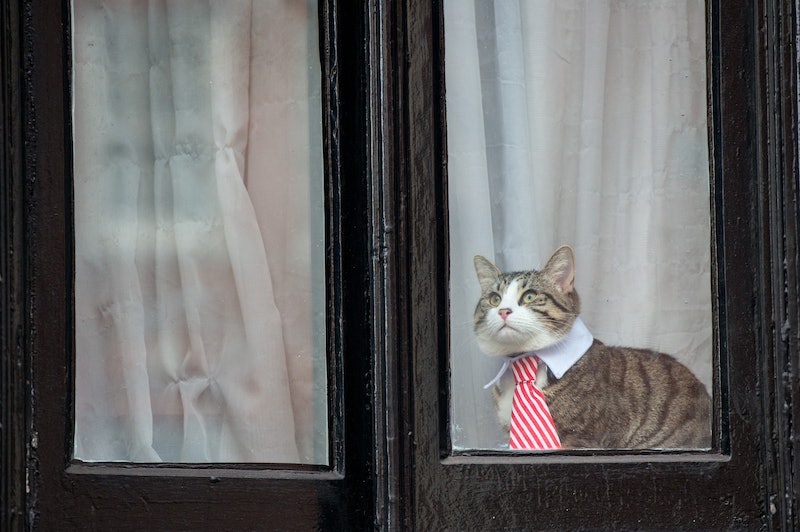 Thanks to Google's tradition of playing the merry prankster every April Fool's Day, cats now have something to help them while away the hours when you're not there to annoy. Google's "I'm feeling Meow" feature, a temporary update to its iOS app, puts all the fun of the internet only a paw's tap away for any tech-savvy feline. If you've ever wondered what your cat's browsing history might look like should they be able to surf the web, then now's your chance to find out.

"Kitties are able to search the Google app with I'm Feeling Meow — or should we say wow?!" Google Project Manager Nabil Shahid wrote in a blog post announcing the update's roll out April 1. "Suddenly a world of fishbowls, birds and scratching posts are just a whisker away. Fur real."

Similar to Google's "I'm Feeling Lucky" search function, the "I'm Feeling Meow" update enables your cat to explore a plethora of images they're bound to get excited over. Unleash the pictures of empty cardboard boxes and tasty-looking mice! Not one to discriminate, Google has also rolled out a "I'm feeling Woof" feature so our canine friends can browse pictures of milk bones and tennis balls to their heart's content.

To access Google's "I'm feeling Meow" or "I'm feeling Woof" simply go into "settings" in your Google app on iOS to select the feature of your choice. Google promises their new features mean that "canines and felines alike can surf pet-friendly info with just a press of their paw." However, because accessing this feature might require a tad more dexterity than your cat or dog currently possesses (they didn't grow up glued to smart phones after all) you'll likely need to do most of the work for them. Still, it's about time someone started thinking about pets' internet needs.

"Now the best of Google is available for all, no matter your location—or in this case — species," Google said in a statement announcing the feature.

If you or your pet are not an iOS user, you'll have to turn to Google's other April Fool's Day rollout — a series of Android apps and games called "Google Play for Pets."

But Google's pet-centered apps and updates weren't the tech companies only April Fool's Day pranks. Along with "Google Play for Pets," and the "I'm Feeling Meow" and "I'm Feeling Woof" features, Google also rolled out "Google Gnome," a fake companion product to the very real Google Home that is meant to make outdoor chores easier. Meanwhile in Google Maps, users found they were able to play Ms. Pac-Man in any area in honor of the prankster holiday.

But for fans of felines, there's one April Fool's Day feature that is truly the cat's meow (yes, pun very much intended).