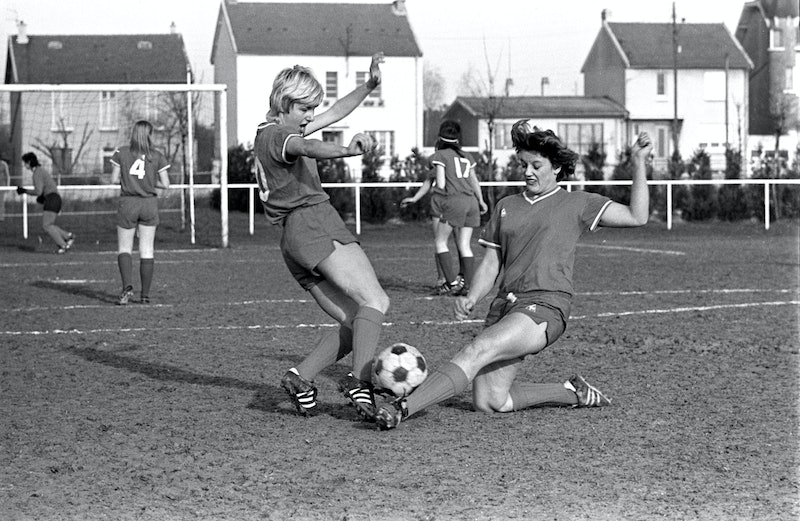 John Curtis/Shutterstock
By Lollie King
May 30, 2019

It's fair to say that, over the years, certain women's sports have not received as much public attention as their male counterparts. Whether it be football, cricket, golf, or rugby, women have always had to work twice as hard in sports to gain a fraction of the recognition and respect in their field. Not only this, but the history of women's sport has also not been particularly well documented, meaning it can be difficult to do research around the subject. But now Google — the ultimate research machine — is trying to change that. Google's new Offside Museum is an amazing new resource to learn about women's football, filled with all the information that was previously unavailable or hard to find.

Since its inception in September 1997, Google has quickly established itself as the holy grail of everything searchable. Whether you're doing some academic research, asking a random question, or looking up song lyrics, Google has it all. It's a one-stop shop for global information. However, when Google attempted to compile a history of women's footbal, they were unable to do it. One of the reasons for this was because of the 1921 ban placed on women's football by the FA. Countries including the UK, Brazil, Germany, and France all implemented the ban, which, strangely, came as the time when women's football teams were experiencing a surge in popularity.

According to the BBC, the FA gave a number of reasons for the ban at the time. "One of them was that they were concerned the money made from the women’s games was being spent frivolously when it should have been going to charity," the write. "Top physicians also started describing football as being unsuitable for women, saying that it was too much for their bodies to handle, and that it might even affect the player’s chances of getting pregnant. This was very different from how it was treated during the war though."

However, as Google explains in a statement sent to Bustle, the ban "didn’t stop women from playing." Instead, "[t]hey played on in secrecy," but this inevitably led to "many historical gaps in women’s soccer."

The ban lasted for a number of decades. In 1969, the Women's Football Association (WFA) was formed with 44 member clubs and then, in 1971, the FA council finally lifted the ban.

Google has decided to call upon the public to help them fill in the gaps of knowledge with the creation of the Offside Museum. According to Google, the digital museum will exists on Google Arts & Culture, and will be working to collect the stories and portray the years of the women’s soccer ban in each country. "In essence," Google writes, it will work as "the world’s largest crowdsourced search for the undocumented history of women’s soccer." From May 30, anyone will be able to submit photos, stories, and facts onto the site.

Google has also created a film alongside the site, which features the story of Lea Campos, the first female referee who was arrested several times during the football ban.

So, whether you have a story to tell about women's football or whether you're looking to learn all about female football pioneers, head to the Offside Museum and experience it for yourself.