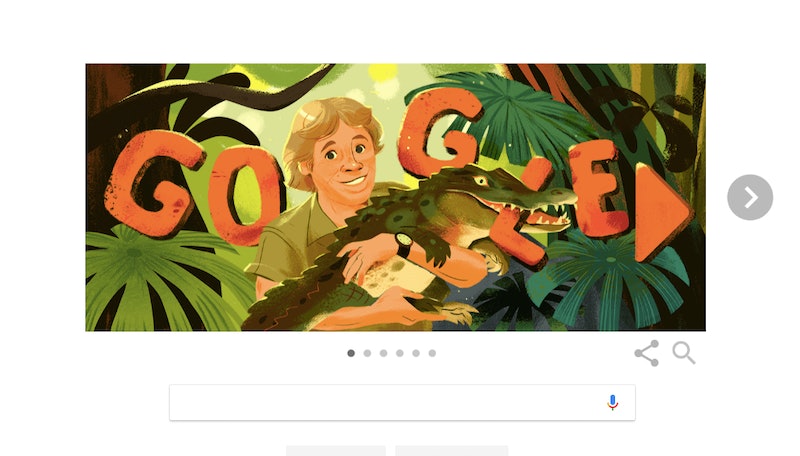 If Google is your go-to search engine, you're probably familiar with the unique displays of digital art that often modify the company's logo online every so often. They're called Google Doodles, and the creative illustrations are used to "celebrate holidays, anniversaries, and the lives of famous artists, pioneers, and scientists." Today, a pretty special one took over the homepage: a multi-slide Google tribute to Steve Irwin on what would have been the iconic zookeeper and conservationists' 57th birthday.

You probably know Irwin best as The Crocodile Hunter, also the name of the wildlife documentary TV series that he hosted and starred in from 1997-2004. The world watched along and shared the charismatic Australian animal-lover's passion for creatures of all kinds for many years, and marveled at how cool the entire Irwin family was. His legacy showed people across the globe what it meant to care for and appreciate wildlife species, so seeing Google make a tribute to him today is pretty special for those of us who grew up watching him. The Doodle includes six different slides, but they all weave into each other perfectly using gorgeous digital animation. It's a short-but-sweet journey through Steve Irwin's legacy--and I can't lie, I got goosebumps.

To make the tribute as reflective of Irwin's life and passions as possible, Google teamed up with his family: particularly wife Terri Irwin and kids Bindi and Robert. In honor of Steve, Terri shared some beautiful words with Google: "Steve Irwin was a loving father and husband who dedicated his life to protecting wildlife and wild places. He accomplished this life mission through his wildlife documentary series The Crocodile Hunter, his world famous Australia Zoo, and his charity Wildlife Warriors," she said.

She went onto describe how the Irwin family has wonderfully furthered Steve's goals, telling Google, "Today we continue his mission by working to overturn recent legislation in Queensland which allows crocodile egg harvesting from vulnerable crocs in the wild to support the commercial leather trade. Steve’s legacy will definitely live on."

Per Google, Steve Irwin got his first major interaction with wildlife when he was only a kid. His parents, Lyn and Bob Irwin, gifted him an interesting gift for his sixth birthday: an eleven-foot python (who he later named Fred). While most six-year-olds get a new toy set or doll, Irwin got a pet that would literally make most of us faint with fear if we saw it up close — it's no wonder his fascination with and appreciation for animals continued throughout his lifetime.

A beloved cultural icon to this day, Steve Irwin cared deeply about the health and preservation of the animal kingdom. His work to ensure the safety of endangered seawater crocodiles and tenure at the Australia Zoo will go down into history. If you're looking to be entertained and inspired this weekend, think about re-watching some old episodes of The Crocodile Hunter — there's no way that you'll regret seeing Steve Irwin in action and in his element again.