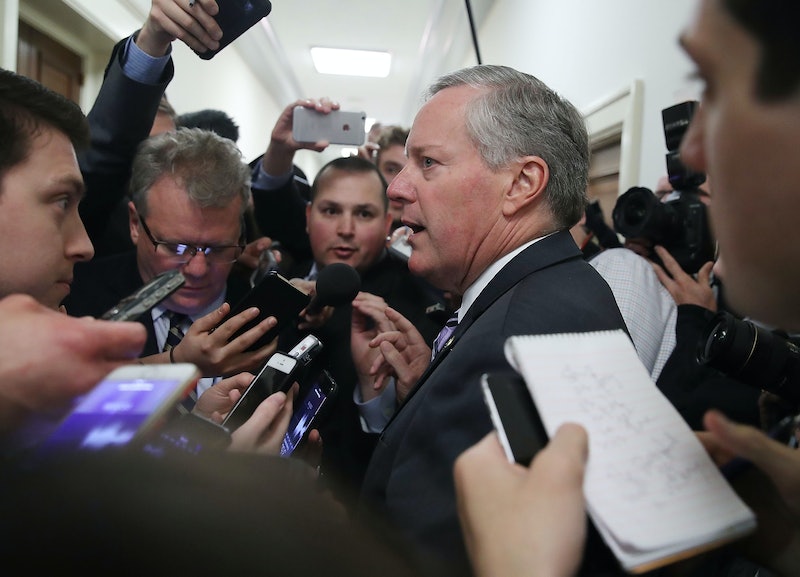 Almost a month after voting to repeal Obamacare, a leading House Republican is finally realizing exactly what it was that he voted for. During an interview on Wednesday with the Independent Journal-Review, Mark Meadows, a GOP representative who supported the AHCA, choked back tears after being told that, contrary to President Trump's promises, the AHCA will not guarantee health coverage to those with pre-existing conditions.

The Congressional Budget Office released its highly-anticipated analysis of the AHCA's effects on Thursday, and it paints a dire picture: Under the plan passed by House Republicans, around 23 million people would lose health insurance, and in some states, premiums for less "healthy" Americans would skyrocket.

In addition, a provision added to the bill late in the negotiating process allows states to opt out of requiring insurance providers to guarantee certain Obamacare-era protections. The means by which it does this is complicated, but according to the CBO, it could ultimately result in people with pre-existing conditions being unable to afford health insurance. Although the AHCA contains a policy ostensibly aimed at preventing this — high-risk pools — it's largely symbolic in nature and, according to both the CBO and the Center for American Progress, won't prevent people with pre-existing conditions from being priced out of health plans.

According to the IJR, Meadows "seemed surprised" when he was informed of this. He insisted that "that's not what I read," and put on his glasses to read the relevant portion of the CBO report. After reading it, he became "suddenly emotional [and] choked back tears."

"Listen, I lost my sister to breast cancer," Meadows told the IJR. "I lost my dad to lung cancer. If anybody is sensitive to pre-existing conditions, it’s me. I’m not going to make a political decision today that affects somebody’s sister or father because I wouldn’t do it to myself. ... In the end, we’ve got to make sure there’s enough funding there to handle pre-existing conditions and drive down premiums. And if we can’t do those three things, then we will have failed.”

There are two ways to interpret this. One could look at this and conclude that Meadows was shaken by the news that people with pre-existing conditions might lose health insurance. That still doesn't paint him in a positive light, as it would suggest that he voted for the bill without even understanding the broad strokes of what it does (let alone reading it). Nevertheless, it would imply that he does at least possess some minimal amount of empathy for the Americans who might suffer under the bill for which he voted.

However, even this might be giving Meadows too much credit. According to Haley Byrd, the IJR reporter who wrote the story, Meadows was tearing up because of the story he told about his sister's illness — not because he realized that people he doesn't know and has never met might lose health care under the AHCA. Far from being genuinely bothered by the nationwide effects of the AHCA, Meadows may have simply been emoting in a visible manner in an attempt to communicate that, in the words of Bill Clinton, he feels your pain.