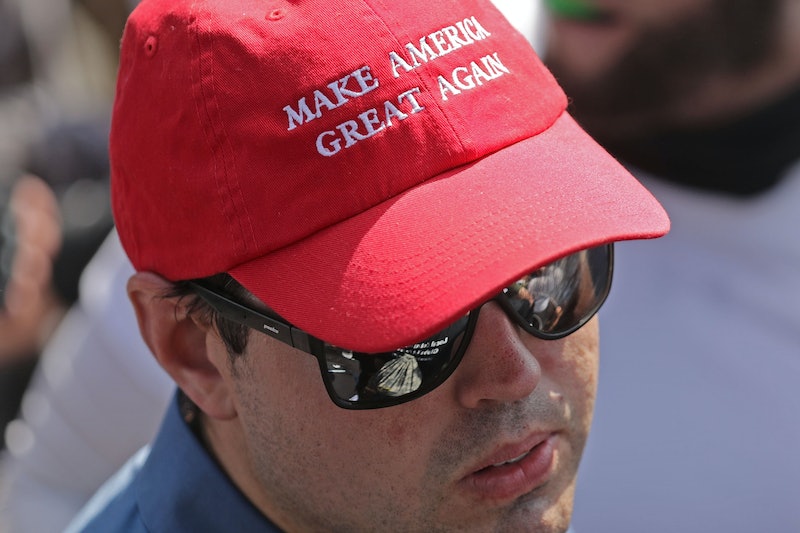 A person's political affiliation can be pretty telling. The kind of individual someone votes for, or which party (if any) they align themselves with — these things have the capacity to reflect what a person believe about economics, social dynamics, even moral priorities. In 2018, these allegiances are as divisive as they've ever been. One casualty seems to be the Washington, D.C. dating scene, where single conservatives say finding a romantic match has grown increasingly difficult.

In a new report by The Washingtonian, a local magazine in the U.S. capital, a handful of single conservatives confessed that, at times, they withhold information about their politics in the interest of trying to get to know would-be dating matches. At times, they say, this might mean removing party affiliation from their dating app profiles, and sometimes it means not mentioning who their employer is.

Meanwhile, some liberal interview subjects confessed to profiling certain types of photos and predicting a potential love-interest's politics based on certain poses or props, siphoning out potential conservatives before they had a chance to confirm or deny their beliefs. They said they screened images for hunting gear, frat parties, and, of course, MAGA hats.

If any of these appeared in someone's profile, progressive users said they were more likely to skip over it in lieu of someone whose views might more closely align with their own.

"I feel like they look at me and are like, here's a tall white dude with brown hair wearing loafers, and he probably has a picture of Reagan and the NRA in his bedroom or something," a reporter for a conservative media outlet told The Washingtonian of progressives in the D.C. dating scene. "I just think they have a very hyperbolic view of what a conservative is," he added.

While a particularly divisive Republican presidency may seem to magnify the issue, some reports indicate that conservative dating in Washington, D.C. might be a bit more of a perennial issue. Back in 2012, The Huffington Post reported on a strikingly similar pattern — and that was while President Obama was in office.

The issue wasn't just that more Democrats might have been living in the city while their party's figurehead worked in the Oval Office — it more likely was related to the city's longterm population.

More than 90 percent of D.C. voters selected Obama during the 2008 election, meaning that while the city may well be home to an almost limitless list of partisan think tanks and nonprofits, it's by and large a left-leaning metropolitan area. They voted almost identically for Hillary Clinton in 2016. Single conservatives have paying the price.

One man — identified only as Tim — told HuffPo that he was once dumped because, after they had sex, she Googled him and found an op-ed he had written. After that incident, he said he began including his party affiliation in his profile in an attempt to be more upfront. After that, some prospective dating matches would politely decline pursuing any sort of dating relationship and directly cited political differences as the reason why they didn't believe things would work out.

Though disinterest in dating across party lines seems to have been a perennial issue, some singles in the D.C. area appear to have expressed that they're paying closer attention under the current administration than they used to. Polls issued to various dating apps signify that user are increasingly more likely to turn down the opportunity to date someone whose political views sit on the other side of the aisle.

Whether or not it's healthy to blacklist a chunk of the population because they prefer red or blue depends on your perspective. But if domestic politics stay anywhere as explosive as they have been in the last two years, it's a pattern unlikely to change any time soon.