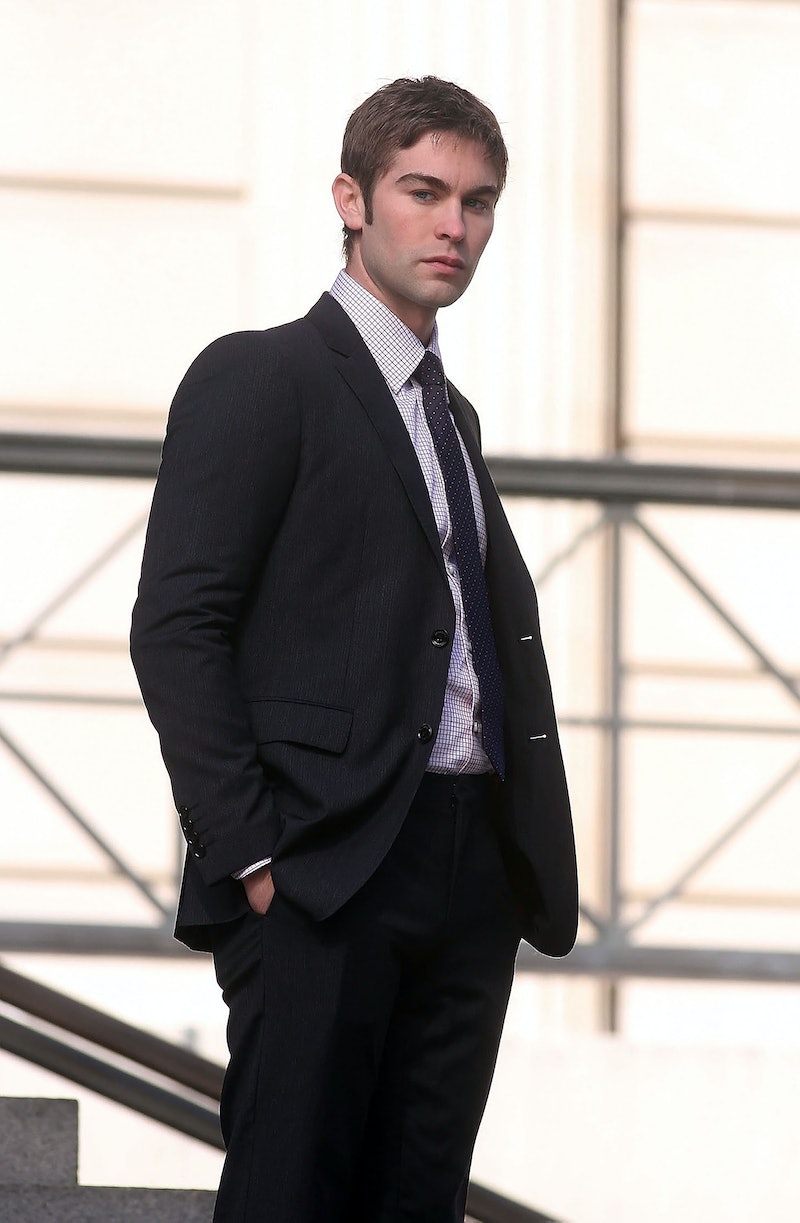 When the series finale of Gossip Girl aired in 2012, fans were shocked, amused, and disappointed all at once as they found out the true identity of New York's all-knowing blogger was "lonely boy" Dan Humphrey. It was a puzzling revelation for many fans, but it actually wasn't the original plan. Fan favorite character Nate Archibald was originally supposed to be Gossip Girl, as writer and executive producer Joshua Safran revealed in a new interview on Sunday, Nov. 10.

Speaking at Vulture Festival over the weekend, Safran was asked the GG fandom's most important question: why was Dan Gossip Girl? As it turns out, he actually doesn't know, because he wasn't a part of that decision. "I like to joke that Dan was Gossip Girl because I had left the show by then," he said, per BuzzFeed. "Dan was not my intended Gossip Girl, so honestly, you'd have to ask someone else."

Although he said that he understood why Dan ended up being Gossip Girl, Safran had his "heart set" on Nate being the elusive blogger, which was the plan for a while. "One of the writers realized that Nate had never sent a tip in to Gossip Girl, which is true at least through the end of Season 5," he explained. "Nate never sent a tip in through all of those episodes, which is when we're like, 'Oh, well then he's Gossip Girl.'"

Safran previously hinted at Nate being a candidate for Gossip Girl in a Vulture interview back in 2017, but this is the first time it's been confirmed that Nate was Gossip Girl before plans changed. As fans may recall, after becoming the editor-in-chief of the Spectator during Season 5, Nate not only started to send in the occasional tip to Gossip Girl when needed, he established a direct line of communication with the blogger, evidently shutting down the possibility that it was actually him.

The true original plan was for Eric van der Woodsen, Serena's little bro, to be revealed as Gossip Girl, but the writers ditched the plotline after a leaked story spoiled the fun for everyone. "We worked hard to kind of lay in tiny seeds about it being Eric," Safran said at Vulture Fest. "Then the NY Post wrote an article saying that Gossip Girl was Eric so we were like, 'We gotta scratch that.'"

During his talk, Safran also dished on the upcoming Gossip Girl reboot for HBO Max. Confirming that the show would focus on a new generation of students at the Constance Billard School for Girls, the producer revealed that there will be much more diversity on the reboot, to more accurately reflect the lives of New York City teenagers, including non-white lead characters and "a lot of queer content."

“There was not a lot of representation the first time around on the show,” he admitted. “I was the only gay writer I think the entire time I was there. Even when I went to private school in New York in the ’90s, the school didn’t necessarily reflect what was on Gossip Girl." He also confirmed that there would be an important twist in the new series, but of course, he couldn't reveal what it was.

Unfortunately, fans will have to wait a while before finding out what, exactly, this new diverse Gossip Girl will look like, given that the reboot won't premiere until sometime in 2020. In fact, news about the Gossip Girl reboot might end up being just as elusive as Gossip Girl herself.

More like this
The First Trailer For 'That '90s Show' Includes So Many Nods To The Original Series
By Jack Irvin, Alyssa Lapid and Grace Wehniainen
'Bridgerton' S3 Teases Exciting Social Season For Penelope Featherington
By Bustle
These 'Law & Order: SVU' Throwback Pics Show 23 Years Of Shipping History
By Grace Wehniainen
Kim Cattrall Had A 'Sex And The City' Reunion With Creator Darren Star
By Grace Wehniainen
Get Even More From Bustle — Sign Up For The Newsletter