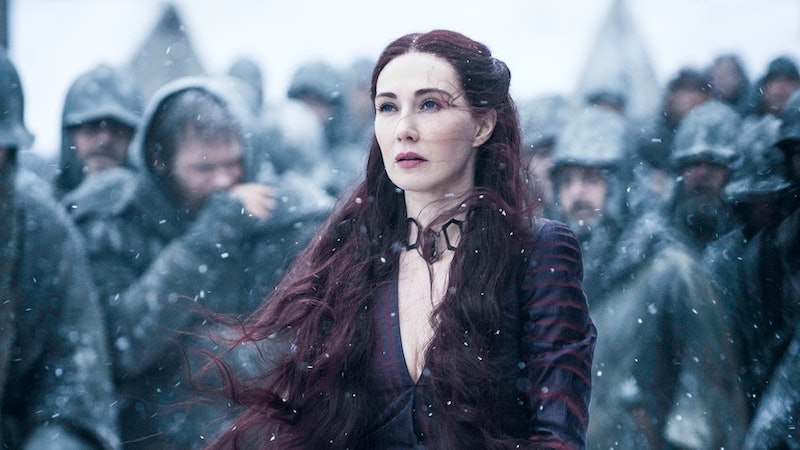 She may serve the Lord of Light on-screen, but in real life the Red Woman is busy battling against all the backlash that Game of Thrones has received throughout the past year. Tuesday, May 19 served as the one-year anniversary of the show's controversial series finale. And Carice van Houten is still defending the GoT ending like it was yesterday. In fact, she thinks that the fan petition calling for a redo of the final season is a form of "extremism" that she feels is completely unnecessary.

The actress, who played the sorceress Melisandre throughout all seven seasons, admitted during a recent interview with Insider that she personally "loved the ending," particularly when it came to naming Bran Stark as the new king of the Six — formerly Seven — Kingdoms. "I loved the randomness and clumsiness of picking a king," she told the outlet. "That's why I loved the first season, the guy who actually was king [Robert Baratheon], didn't want to be king, so we already got a lesson in the beginning: 'Why are you striving for that sort of power when, obviously, it doesn't make you happy?'"

However, not all fans of the widely popular HBO series shared her enthusiasm over how the final season played out.

Prior to the final episode airing last year, fans created a petition asking that HBO remake Season 8 "with competent writers," believing that the storylines and character developments felt vastly out of place. One of the biggest criticisms was how quickly Daenerys spiraled into becoming the Mad Queen, opting to burn King's Landing to the ground despite the city's willingness to surrender. The petition was born and ended up garnering hundreds of thousands of signatures. However, despite the complaints, van Houten thinks the blowback "feels a bit ungrateful" at the end of the day.

"The fact that some people were so disappointed is because everything before that was so good," she stated during the same interview. "You’ve had such great times and then yeah, you’re going to be disappointed because it’s not going to go exactly how you anticipated. Of course, you’re going to have all sorts of criticisms and I just thought it was a sign of how good the show was."

But most of all, she didn't think it was fair to want to oust showrunners David Benioff and Dan Weiss from their position as writers, calling the demand harsh and "beyond fandom. That's extremism. That's scary. Knowing the writers and knowing how f*cking great they are, they don’t deserve that."

The night is dark and full of terrors indeed!

More like this
Everything To Know About 'RHOC' Season 17
By Brad Witter and Sophia Moore
'Bridgerton’s Jonathan Bailey & Simone Ashley Just Teased A First Look Of “Kanthony” In Season 3
By Grace Wehniainen, Alyssa Lapid and Sam Ramsden
Gabby & Rachel Reveal How That 'Bachelorette' Rose Ceremony Twist Happened
By Grace Wehniainen
'The Sandman’s Ending Is A Departure From Neil Gaiman’s Comic Book Series
By Kadin Burnett
Get Even More From Bustle — Sign Up For The Newsletter