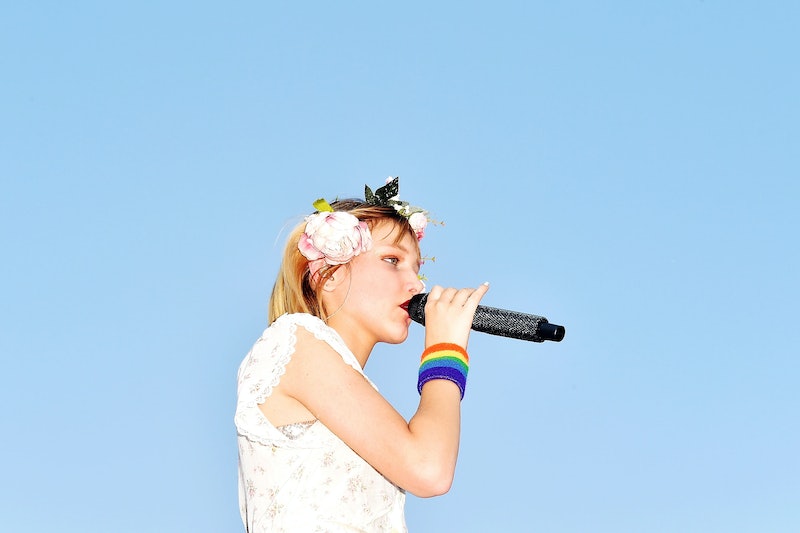 It's been just over a year since Grace VanderWaal finished her first world tour as the opening act for Imagine Dragons, but the 15-year-old singer-songwriter has been keeping busy — out of the spotlight. "I wake up, go to school, come home, do my homework, go to sleep, and repeat," the New York-based teen tells me of her life outside of work, speaking over the phone in February. But despite categorizing herself as a "very normal" kid, when it comes to her music career, VanderWaal —who became a household name overnight after winning the 11th season of America's Got Talent at the age of 12 back in 2016 — is far from average.

For one thing, she recently became the youngest person ever to land a spot on Forbes' 30 Under 30 music list. And then there's her soulful voice and wise-beyond-her-years lyrics, which are displayed in her 2017 album, Just the Beginning, as well as her new single, "Stray." The song, out Feb. 22, is about "finding your way through that unsure ground as you grow up, and allowing your personality to mature with you," VanderWaal explains.

The artist adds that the track is "special" to her because of how it was made. "I wrote the intro, chorus, and the second line, and then I stopped and gave up on it for a few days," she says. "Usually, if I'm going to write a song, I have to finish it then or I'll never be able to revisit it because I'm out of that moment and that momentum is lost. I thought I was leaving 'Stray' behind, and then the rest just popped in my mind later."

The music video for "Stray," directed by Blythe Thomas, mirrors the song's lyrical themes of adulthood and identity, following two versions of VanderWaal as she wanders through the desert — one dressed in white, and one dressed in black, bicycling blindfolded.

"It's about my different personalities, almost. I feel like everyone has a personality that they show for different people they know in their life, and they may switch to those involuntarily," the singer explains. "It feels like I'm biking blindfolded, growing up and maturing, and obviously, if you're not yourself you're going to crash... growing up and not knowing where I'm going to go or what the next turn is; industry or not, I think it's something everyone faces."

As VanderWaal says, those coming-of-age struggles are common for everyone, and not necessarily magnified just because there are more eyes watching her than most (over 3 million on Instagram, to be exact). "I don't feel much pressure because I try not to overthink it," she says of fame. Still, "I don't want to say I'm some laidback hippie, because I have my moments where I overthink and doubt."

It helps, she adds, to "take it a day at a time and not look too far ahead in the future or back in the past too much — I just try to keep doing what I'm doing so that it doesn't get the chance to ever really affect me."

Though she's resolved not to let the spotlight define her, VanderWaal is aware of the opportunities she can create for others as a result of her own success. In 2017, she started the Little Miracles Foundation, which brings music to school districts without access to it due to lack of funding. "It's really important to me because I feel like music is such a creative escape, especially for kids who don't quite know how to express their feelings yet. It can get very frustrating, and I feel like music is such a release of all those feelings," she says.

Given that VanderWaal's big break came when she performed her own song while playing the ukulele during her America's Got Talent audition in 2016, it's not difficult to understand why she would choose to champion early access to a musical education. "It's very fair for every kid who goes to school to be able to have that opportunity to learn about music," she says. "We're focusing on a few little schools right now, but hopefully, we can help out even more in the future."

Despite having already accomplished an impressive amount, VanderWaal only seems to be picking up speed. She's set to make her acting debut as the eponymous lead in Disney's Stargirl in 2020, and in the meantime, there's more music on the way.

"Everything could change in the future," she says. "I would love to keep exploring and experimenting [with my music], but I'm pretty content now with what I know and what I do." While VanderWaal may not be making any exact predictions on her future career plans, one thing is clear: she's set on keeping everyone on their toes as they happily await what's next.