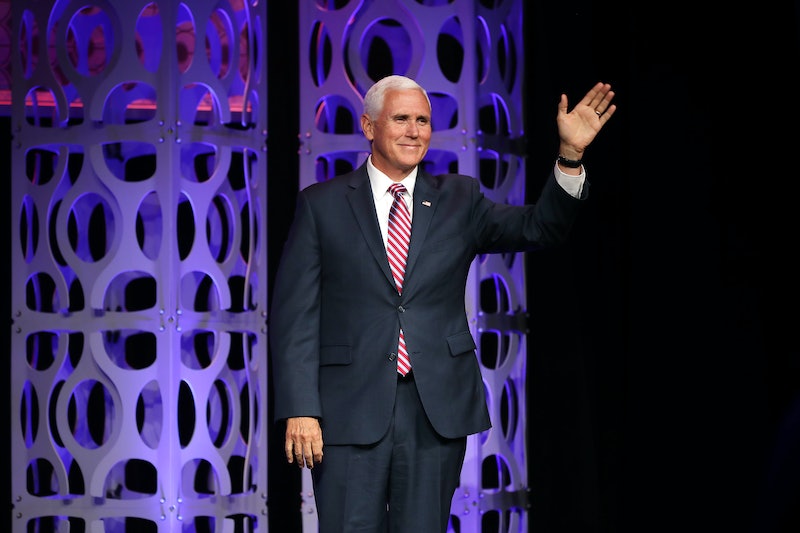 Frustrated by their school's choice of commencement speaker, dozens of faculty and Taylor University graduates walked out on Mike Pence in protest at the college's commencement ceremony Saturday. According to The Indianapolis Star, the university had been divided over school administrators' decision to invite the vice president, a well-known conservative evangelical, to deliver the nondenominational Christian liberal arts college's commencement address.

According to The Indianapolis Star, protesting students and faculty quietly stood and walked out of the ceremony just prior to Pence's introduction. "I thought it was a really inappropriate decision," one protesting graduate told the paper of the school's decision to invite Pence to speak. "I think his presence makes it difficult for everyone at Taylor to feel welcomed."

Despite the walkout, the majority of Taylor University's graduating class remained in their seats, The Indianapolis Star reported. What's more, those in the audience reportedly greeted the vice president with a standing ovation, according to the paper.

Last week, while speaking at a different commencement ceremony, Pence warned Liberty University's graduating class that they'd be "shunned" for being Christian. He repeated a similar message Saturday at Taylor University's commencement, claiming it had become "fashionable to malign traditional Christian beliefs."

"As you prepare to leave this place and will your life on a Christ-centered, world-engaging foundation poured here at Taylor University, be prepared to stand up," he said.

According to The Hill, students at Taylor University had circulated competing Change.org petitions in the weeks before Pence's visit. One, with more than 6,100 signatures, called on the university's community to support Pence as commencement speaker. "By Pence speaking at this upcoming graduation, Taylor is by no means aligning themselves with the alleged controversial views of the Trump administration, they are simply giving a voice to all opinions and planes of thought," the petition reads. "We also believe that someone of power, such as VP Mike Pence, should be respected and welcomed for committing their incredibly valuable time to Taylor University, regardless of political affiliation."

Another, with more than 8,100 signatures, argued that giving Pence a platform to share his political views made the school "complicit" in the actions of the Trump administration. "Inviting Vice President Pence to Taylor University and giving him a coveted platform for his political views makes our alumni, faculty, staff and current students complicit in the Trump-Pence Administration's policies, which we believe are not consistent with the Christian ethic of love we hold dear," the petition read.

Saturday was, however, not the first time graduates have walked out on the vice president as he prepared to deliver their commencement address. A group of Notre Dame graduates walked out on Pence in 2017 in protest of policies he'd helped to enact as both vice president and governor of Indiana. According to CNN, protesting graduates argued Pence's policies served to further marginalize people on the basis of religion, skin color, and/or sexual orientation.

According to USA Today, Pence is expected to deliver a speech next week before West Point's graduating class of U.S. Army cadets.