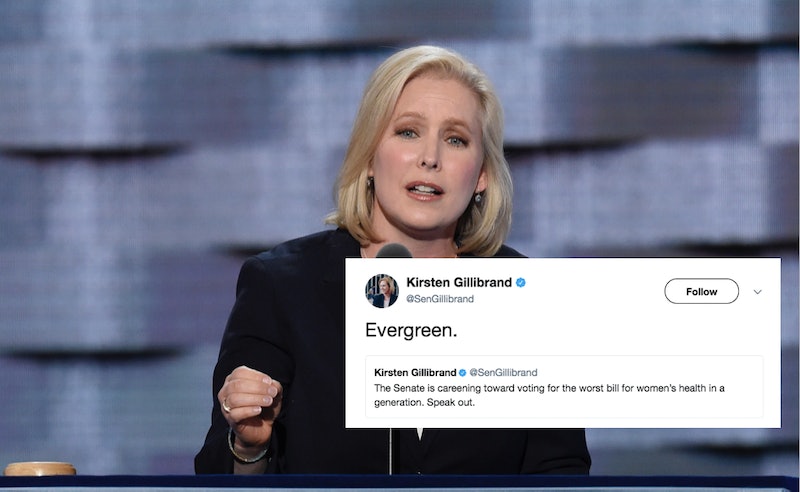 If you're sick of the near-constant threats to health care coverage in America, think of how the legislators fighting to protect it feel. Congressional Republicans are singing their age-old anti-Obamacare hymn this week as yet another measure to repeal some key provisions of Obamacare works its way through the legislature, and Democrats are not happy about it, including Sen. Kirsten Gillibrand. In a heartbreakingly simple refrain on the most recent GOP effort to repeal Obamacare, the Graham-Cassidy bill, Gillibrand highlighted on Twitter how little progress the nation has made over the last few months.

On Thursday morning, Gillibrand retweeted her own tweet from July that read, "The Senate is careening toward voting for the worst bill for women’s health in a generation. Speak out." The original tweet was posted in July, back when the party made another unsuccessful attempt to repeal Obamacare. The updated caption simply said, "Evergreen," a rhetorical metaphor for the fatigue of having to fight to save Americans' health care on what appears to be a quarterly basis this year.

Despite Republicans' protests to the contrary, the Graham-Cassidy bill up for consideration in the Senate would leave many Americans unable to afford coverage. Thirty-one states and Washington, D.C. chose to expand Medicaid services under President Obama's health care law, but the Graham-Cassidy bill would cut funding for Medicaid expansion by $180 billion.

The bill would also allow insurance companies to charge people with pre-existing conditions higher premiums than healthy people, shifting the financial burden of illness onto victims rather than sharing it. States could choose to keep protections for sick people in place, but the loss of federal funding would make premiums shoot up for everyone, and state governments may choose to penalize sick people to keep the majority happy.

The silver lining for Democrats is that the GOP only has until Sept. 30 to pass this bill before the budget reconciliation process is done. If Republicans tried to pass the bill after that, they'd need 60 votes in the Senate, a nearly impossible task in the divided body. With only a handful of days left in session and contention within the ranks of the Republican Party — including Sens. Lisa Murkowski, Rand Paul, and Susan Collins — the bill doesn't have the best chance of passing. Yet it's still a terrifyingly real possibility for the millions of Americans who would lose part or all of their health insurance coverage if it does, and as Gillibrand's tweet reminds her followers, the American people must speak out — especially by calling their senators.

It's difficult not to read Gillibrand's tweet and have a sickening sense of déjà vu. It's like the movie Groundhog Day — Congress seems to be eternally stuck on the same problem, rehashing this failure over and over again and trying to use sneaky methods to get it past the American people. The nation is going on nine years of Obamacare repeal attempts by a political party that is no longer paying attention to what the nation actually wants (60 percent of voters polled don't want to institute the Republican block grant plan). It's become clear that the GOP lied to people — Obamacare isn't going into a "death spiral" and while the system is not perfect, the health care law is life-saving for many Americans.

Gillibrand's tweet is a sad reminder of how hard progressives have been fighting this year for little tangible reward. However, it can also be comforting to flip the problem on its head and take the opposite perspective. Even though Republicans are in power in all branches of the federal government right now, nearly all of their major policy initiatives have failed this year. The American people have at least been able to prevent the legislation they don't want this year, and although it's draining work, everyone must keep fighting together.