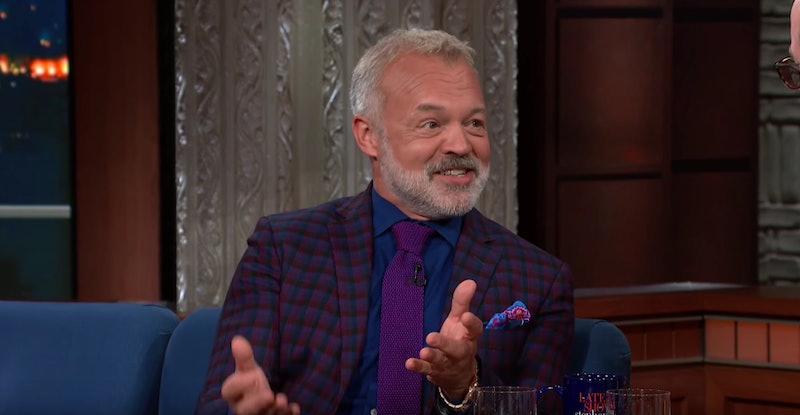 Throughout its many years on the air, The Graham Norton Show has become a Friday evening staple for millions of viewers across the UK. The usual lineup of A-list guests, complete with their own hilarious (and sometimes alcohol-induced) anecdotes, is what makes this BBC chat show stand out in the crowd, and during a recent appearance on a U.S. chat show, Graham Norton revealed his most outrageous guest, and the details surrounding their diva demands will blow your mind.

Norton made the revelation during his recent appearance on The Late Show with Stephen Colbert over in the States. When quizzed by the show's host about his trickiest guests, Norton revealed that one A-lister in particular took his "breath away." Sadly, Norton didn't actually reveal the name of the guest, but he did let viewers in on some astonishing details in regards to their outrageous backstage demands. As reported by the Huffington Post, the Graham Norton Show host told Colbert, "You get used to it but there’s one that kind of took our breath away and I cannot say who this was. This person — who shall remain nameless — I’ll call her 'she,' she wanted nine dressing rooms and we go 'fine, here are your nine dressing rooms'."

Colbert began to speculate if the guest in question was in fact pop superstar Madonna, however Norton refused to budge, and going into further detail about their bonkers demands, the BBC host added, "That afternoon, I’m sitting in the production office and one of her minions comes into us and says 'it’s a 911 situation. We need another dressing room.' So, our line producer sorts that out but while she’s on the phone to get another dressing room and on hold, she says 'out of interest, why does she (the guest) need another dressing room?'" Norton went on to reveal that the additional tenth (yes, tenth) dressing room was apparently needed for the guest to charge her cellphone. Amazing.

Whilst over in the States, where Norton has recently been busy promoting his latest novel A Keeper, the award-winning broadcaster revealed in an interview on SiriusXM that he's considering cutting down his current TV workload. According to The Sun, Norton said, "Having observed friends of mine who’ve stopped working, it doesn’t seem like a great thing to do. What I might try to do is cut back on my workload. We are on air right now 35 to 36 weeks a year. So if I cut that down, maybe lob ten weeks off it, then I think that would be ideal. Then I would be able to stare at a wall, write a book, walk the dogs." Speaking of his post-retirement worries, the Father Ted star went on to say, "What’s odd is, when you stop working you become a teenage girl. You start obsessing about minutiae. I don’t want to turn into that person."

Well, I certainly hope the Graham Norton Show host isn't going anywhere soon, and I look forward to more backstage secrets from the BBC series in the future. Fingers crossed.