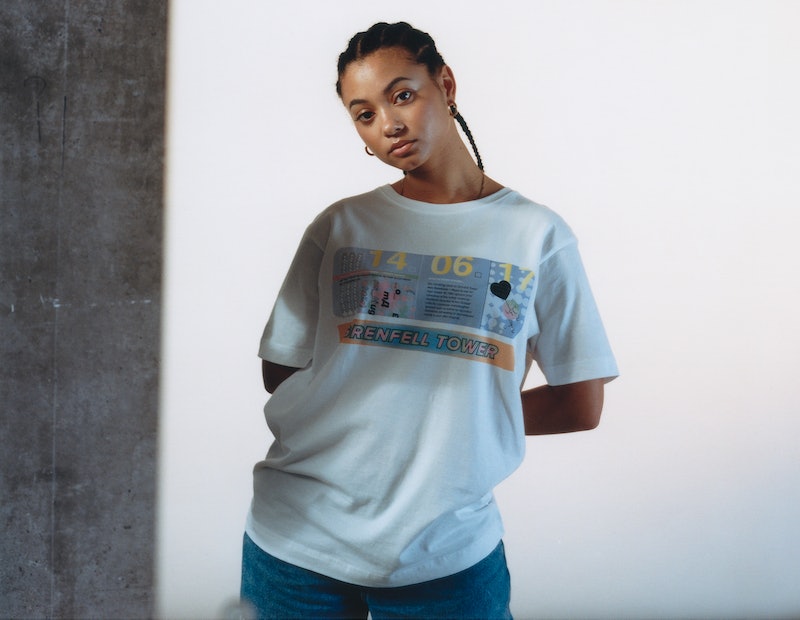 Some people would argue that fashion is a superficial industry; one that is unable to make a tangible difference to the world. But charities think differently. Human rights organisation Amnesty International has teamed up with merchandise maker Everpress and 50 artists for a collaboration on 50 t-shirts that question censorship in all its modern forms. Ranging from basic Instagram censorship (why are we still not allowed to show our nipples, Insta?) to the need to uncover the truth behind the fire at Grenfell Tower, the charity t-shirts display powerful prints that encourage you to look beyond the obvious.

"Censorship is often the thin end of the wedge when it comes to human rights violations," says Amnesty International UK director Kate Allen in a press release. "Time and time again, we’ve seen cases of brave human rights defenders in repressive countries being subjected to censorship, then threatened and harassed, and then finally jailed or even killed. We’re delighted to be working with Everpress and this incredible array of designers to raise awareness of the evils of censorship."

All of the 50 t-shirts will be on show at a special exhibition that is now open in London's Protein Studios. The £25 designs are also available to buy online until June 28. Everpress will be covering their costs, but won't be taking any of the proceeds, with 50% of the profits going to Amnesty and the other half going directly to the artist.

One of the most striking designs is by London-based streetwear label Radical Boulevard, which focuses on the June 2017 fire that killed 72 residents of Grenfell Tower. Instead of using bold and alarming shades, the anonymous designer has utilised pastel colours to relay his message.

As well as spelling out the date of the tragedy, it details several facts that society seems to have forgotten. "The royal borough of Kensington and Chelsea council and the individuals involved need to be held accountable and investigated for," the t-shirt reads.

Another paragraph states: "The cladding used on Grenfell Tower was flammable and illegal to use on high towers/KCTMO ignored prior concerns of fire safety raised by residents (Grenfell Action Group)/calls for corporate manslaughter ignored with no follow up by police/survivors still waiting to be rehoused nearly a year after tragedy."

The artist behind Radical Boulevard tells Bustle that he wanted "to expose the injustice and highlight the catalog of errors committed by the un-Royal Borough of Kensington and Chelsea and the corpoRATe swines they enlisted to carry out the 'regeneration' works that ultimately ended in lives being lost in the most horrific of circumstances." Bustle have reached out to the Royal Borough of Kensington and Chelsea for comment but had not received a response at the time of publishing.

A public inquiry into the fire began in May. The first seven days have been filled with heartfelt testimonies from the families of the 72 victims. The rest is expected to examine the mistakes that led to the tower catching fire and to the lack of support given to the people who have been left without homes.

A recent review by Muslim Aid found that the council's response to the incident was severely flawed and that the disaster should be a "wake up call." Instead of setting up a helpline, local residents and charities were left to help those in need. A BBC investigation, meanwhile, has concluded that the insulation responsible for allowing the fire to burn uncontrollably failed to pass safety tests and should therefore never have been used on the building.

Radical Boulevard's designer says that there are several things that people need to remember about incidents like this, starting with the fact that "individuals are responsible for this tragedy". He hopes the truth will finally "prevail for the [Grenfell] victims and their families" and would like to relay the following message to anyone who lost a loved one in the fire: "Although I don't know you personally, I'm so sorry for what you have gone through. You are brave and although your heart is in pain, know that people like myself are behind you and will support you until the end."

A t-shirt won't change the world but it could help bring justice to the families — both in the UK and abroad — who are suffering. Forget superficiality. Fashion can, and should, be used for good.

Update: This post was updated to reflect that Evergreen will be using the proceeds of sales to cover their costs, will all profits going to Amnesty International and the artist.