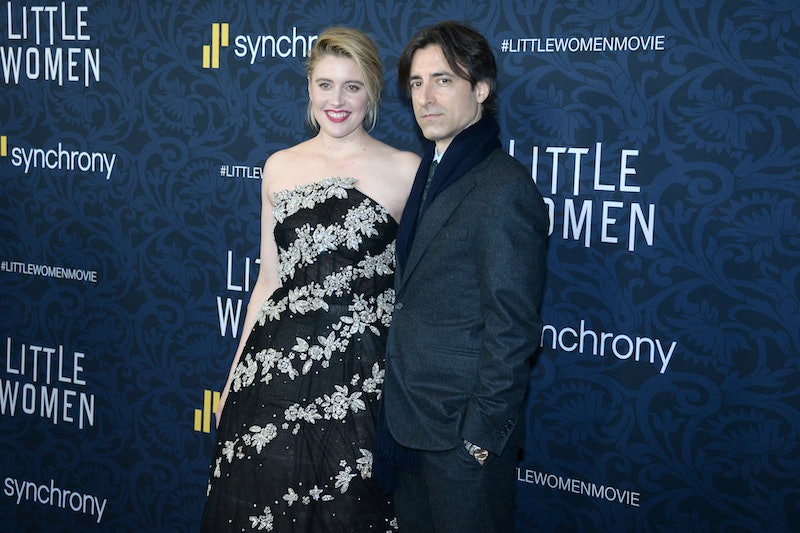 Dubbed the "first couple of film" by The Hollywood Reporter, Greta Gerwig and Noah Baumbach currently preside over an industry that looks adoringly upon both their individual work and their relationship. Both writer-directors are gearing up for a big awards season: Gerwig's Little Women premiered in theaters this Christmas to rave reviews, and Baumbach's Marriage Story premiered earlier in December on Netflix (after a limited theatrical release) to similar acclaim. Whether working together or separately, both Gerwig and Baumbach are known for making the personal, painful, and private moments of relationships relatable, and it's not hard to imagine their own relationship plays a strong role in their process. To that end, here's a timeline of Gerwig and Baumbach's relationship and how it's informed their collaborations.

The start of Gerwig and Baumbach's working relationship began with 2010's Greenberg, a comedy written and directed by Baumbach and starring Gerwig along with Ben Stiller, Rhys Ifans, and Brie Larson. This wasn't the first time Baumbach had encountered Gerwig or her work, however. According to New York magazine, Baumbach saw Gerwig in 2007's Hannah Takes the Stairs, one of the many mumblecore films she made in the mid-00s, and enjoyed her performance so much that he recommended his agent take a look at her work. That resulted in Gerwig gaining an agent long before Baumbach and Gerwig ever met. That agent, in turn, recommended Gerwig to Baumbach for Greenberg.

Greenberg also featured Jennifer Jason Leigh, Baumbach's wife at the time. They met in 2001 and married in 2005. Nine months after Greenberg premiered in theaters in 2010, Leigh filed for divorce from Baumbach, citing irreconcilable differences, according to Radar Online. Neither Gerwig nor Baumbach say that his split with Leigh was a result of their connection; a New Yorker interview in 2013 states, "Baumbach and Gerwig firmly place the start of their romance at a point after his separation."

According to a Globe and Mail article from 2013, Gerwig and Baumbach officially became a couple in September 2011, a month after they both started working on 2012's Frances Ha. The piece also points to their romance as inspiration for the film, describing how in the lead up to its production, the pair "passed e-mails back and forth (first just details and moments, which gradually became scenes), occasionally getting together to read aloud what they had written."

Similarly, in a chat with the Guardian published in 2013, Baumbach said of the film's creation: "In making this, I was led by Greta [Gerwig]. Things were clear to me in large part because of knowing Greta."

But make no mistake: Gerwig resists the implication that she served as "a muse" for Baumbach in any way. In an interview with Vogue for their January 2020 issue, Gerwig said, "I remember being very frustrated by that and wanting to correct it." She was also asked if her relationship with Baumbach afforded her more opportunities in Hollywood, to which she replied, "But the answer is: Yes, of course, for so many reasons. But he's also this incredibly important collaborator and influence on me. The most important." She went on to add, "But I think I was hell-bent on making my own films, so I would've done it anyway."

2012 saw the release of Frances Ha, which was co-written by both Gerwig and Baumbach, with Baumbach also directing. A 2012 LA Times look at the film labelled the two of them as "a real life couple." It's their first official collaboration, but certainly not the last.

Next up for the pair was 2015's Mistress America. Similar to Frances Ha, Gerwig co-produced and co-wrote the film with Baumbach, who also directed. Rotten Tomatoes' critical consensus praises the work between the two in Mistress America as "bring[ing] out the best in collaborators Noah Baumbach and Greta Gerwig, distilling its star's charm and director's dark wit into a ferociously funny co-written story."

Remaining fairly private about their relationship (perhaps given that neither of them have social media presences to speak of, which allows that privacy), the couple turned heads when they walked Hollywood's biggest red carpet at the 2018 Academy Awards, hand in hand. The pair never denied that they were a couple, of course, but this was one of the first highly publicized displays of affection between the two.

Gerwig's Lady Bird, which premiered that same year, was nominated for Best Picture (among others), but didn't take home the gold. However, it won Best Musical or Comedy at the Golden Globes, and when Gerwig went to deliver her thanks and acknowledgements on stage, she forgot to thank Baumbach. Speaking of the mistake on The View, Gerwig said, "I had an entire speech that I was going to give and I got up there ... I looked at Oprah and I was like, 'It's gone!' But I had a whole thing about him. He's my favorite writer and my favorite first reader."

In March 2019, Gerwig and Baumbach welcomed their first child, which came as a surprise to the public, because again, the couple quite obviously seem to value privacy when it comes to their relationship. They've been mum about the child's name since the news broke, but Vogue's profile of Gerwig in their January 2020 issue has the reveal: his full name is Harold Ralph Gerwig Baumbach. This is the second child for Baumbach, who has one from his past marriage to Leigh.

Only time will tell what else is in store for Hollywood's current critical darling couple — as Vogue points out, if both Little Women and Marriage Story land Best Director nominations at the Oscars, it would be the first time in the show's history that two people in a couple are nominated for the same award.

More like this
Rita Ora & Taika Waititi Are Reportedly Married
By Sophie McEvoy and Catharina Cheung
Amanda Seyfried Says She Felt Pressured To Shoot Nude Scenes At 19 Years Old
By Jake Viswanath
The Sean Bean Intimacy Coordinator Controversy, Explained
By Sam Ramsden
Christina Perri Had No Idea Her 'Twilight' Song Is On YouTube's Top 100 Chart
By Radhika Menon
Get Even More From Bustle — Sign Up For The Newsletter