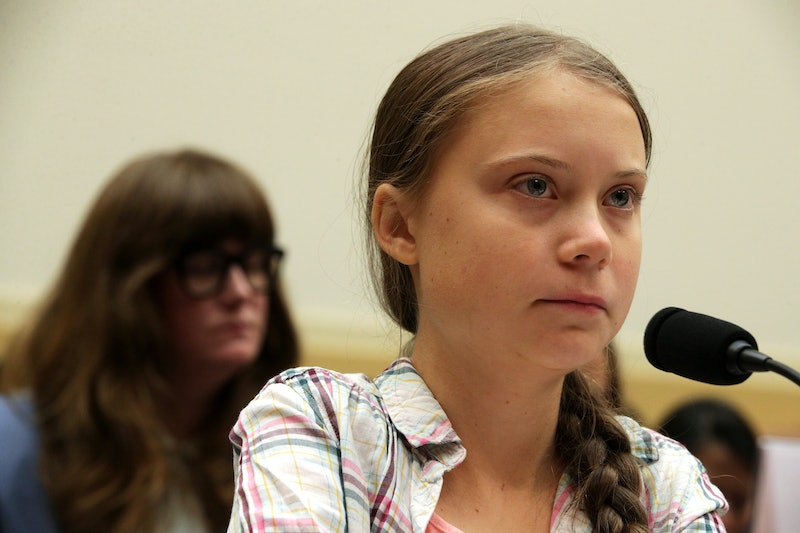 “Please save your praise,” Greta Thunberg told Congress when lawmakers applauded her climate activism at a Senate climate change task force meeting in Washington, D.C., on Sept. 17. The Swedish 16-year-old also bluntly criticized American political leaders for not trying hard enough before giving an emotionally charged speech at the United Nations, saying how dare they allow the climate crisis to continue. As Thunberg and I are both autistic women, her speeches have appeared countless times in my social media feeds, alongside praise from former classmates and autism community members alike.

While Thunberg actively shuts down praise for her climate activism, including organizing a global strike that saw around 4 million people protesting inaction against the climate crisis, she has said she is proud of her Asperger’s Syndrome, a diagnosis that is now considered part of autism spectrum disorder. “Given the right circumstances, being different is a superpower,” she tweeted on Aug. 31, after sailing from Plymouth, UK, to New York City. I, too, have always felt being different was my superpower. My parents shared my autism diagnosis with me at age 9 and likened it to Harry Potter's magic because of my creativity, memory, and other unique strengths.

Unsurprisingly, Thunberg's openness about her diagnosis has made her a role model to other autistic people. Cynthia Zuber, who was diagnosed with autism at age 40 and blogs under The Neurodiverse Woman, admires how Thunberg shows “strength, determination, and grit — no matter what,” she tells Bustle. In the wake of the bullying Thunberg has experienced online from right-wing politicians and others — for being a teenager, a woman, and an autistic person — autistic author and illustrator Steve Asbell created the hashtag #AutisticsForGreta, which the autistic community adopted to show support and solidarity for Thunberg.

At 25, I’m already part of a different generation than Thunberg. Because autistic girls and women are diagnosed less frequently than our male peers, the autistic women who came before us were trailblazers. When I was young, animal scientist Temple Grandin was the prominent female autistic role model; Grandin, now in her seventies, has been criticized for her incorrect and outdated rhetoric about autistic unemployment, among other topics relevant to the autism community. At 16, Thunberg is a breath of fresh air, calling herself neurodiverse, meaning her brain works differently than those of neurotypical people, on CBS This Morning. She stands up to criticism and bullying that many on the autism spectrum face. I have been bullied, although more subtly through benevolent ableism, where people believe they are being kind and caring, but their actions are in fact discriminatory and reinforce negative disability stereotypes, and certainly not on the world stage as Thunberg experiences daily because of her autism. But the criticism does not take away from her laser focus on environmental activism.

What gets glossed over most in conversations surrounding Thunberg is that she is an autistic young woman. Asperger’s and autism were previously seen as male diagnoses, and autistic girls and women like me face different stigmas and stereotypes compared to autistic boys and men — managing delayed diagnosis as a result of a lack of research around how autism presents in women, or dealing with incorrect assumptions about our abilities. Thunberg's reach to autistic women extends far beyond Gen Z’s young people like herself and millennials like me; the same women who first learned Temple Grandin’s name instead look to Greta Thunberg for a role model of autistic representation. When I see Thunberg, I see myself. I see the intense concentration on the things I care about, and the audacity to be herself in a world where women — autistic women especially — are told what limits to place on themselves, or have society place on them. We are both advocates. Climate is not my passion — inclusion is — but similarly to Thunberg, I constantly find myself thinking about how we can do better in terms of autism acceptance.

I see myself in Thunberg; a young, passionate woman, wanting to make change.

Dr. Dana Waters, who is an autistic psychology professor at Antioch University, feels Thunberg spurred her to action. “[Thunberg] has single-handedly helped me reset my advocacy saturation point,” Waters tells Bustle. “I have agreed to speak on panels and recently came out as autistic at work. I owe all of that to just one 16-year-old. One strong, tenacious, beautiful, caring, young woman!"

“Greta embodies the autistic woman and makes us all proud beyond belief,” Zuber adds. It’s no secret amongst friends and colleagues that I am also proud of Thunberg's activism as a young autistic woman — some days when people at work talk about the news, I immediately want to mention how Thunberg makes me proud. I see myself in Thunberg; a young, passionate woman, wanting to make change.

Autistic women, who may mask in order to present as typical in social situations, appreciate Thunberg's authenticity. “When neurodivergence is respected and supported, autistics like Greta are able to stand fully in their truth and no longer feel the splintering pressure to mask their identities,” Sarah Selvaggi-Hernandez, a practicing occupational therapist, who is autistic, tells Bustle. Selvaggi-Hernandez wants her “autistic siblings to be seen for their true selves.”

As Maura Campbell, an autistic senior writer and editor at Spectrum Women Magazine, tells Bustle. “I am loving this new generation of young people mobilized by an autistic girl who are stepping forward to provide constructive challenge and act as our conscience. Autism may literally save the world.”

And if autism may literally save the world, then Greta Thunberg has quite the superpower.