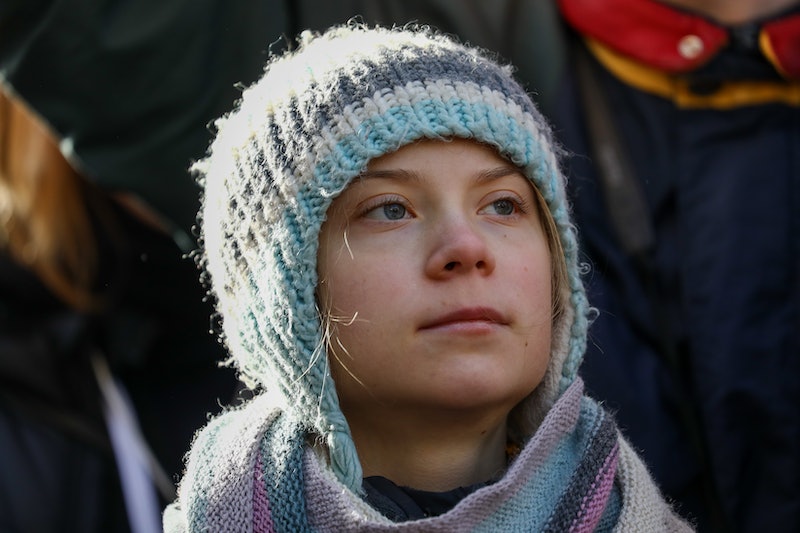 Bringing her urgent message about the global climate crisis to the screen, Greta Thunberg will be part of a new docuseries about climate change in partnership with BBC Studios’ Science Unit, according to Entertainment Weekly. Thunberg, a 17-year old Swedish activist, has spent the last several years raising awareness about global climate change and urging government officials to take significant action. In that time, she's become a bit of a star activist, and now viewers will have the opportunity to follow Thunberg across the world to map scientific evidence of climate change along with leading scientists, as well as confront worldwide leaders to take action before it's too late.

The series, which does not yet have a title or official network for release in the United States, will also follow, "Thunberg's journey into adulthood," according to a E! News. So expect plenty of quiet, personal moments, including some scenes of Thunberg writing the famous speeches that have made her a household name. In a statement, BBC Studios Executive Producer Rob Liddell promised the show would be informative for the audiences, calling it an "authoritative series that explores the facts and science behind this complex subject," as per E! News. Liddell added that the opportunity to work with Greta is an, "extraordinary privilege," and that viewers would be, "getting an inside view on what it's like being a global icon and one of the most famous faces on the plane."

BBC is not the first network to take an interest in Thunberg's story. In December of 2019, Hulu announced a documentary about Thunberg titled Greta, which will follow the activist's rise to fame and her work across the globe, according to Deadline.

Though Thunberg continues to use her growing platform to focus on climate science, and has been clear about her discomfort with the spotlight. In September of 2019, Thunberg said she didn't like to be "the center of attention", but often did not have a choice in her role within the climate movement, according to CNN. She added: "I don't want to be heard all the time, but if there is anything I can do to improve the situation then I think it's a very small price to pay."

She might not want to be in front of a camera 24/7, but it's a sacrifice she's willing to make if it helps combat climate change. Hopefully, these new projects will be worth it.

More like this
8 Charities To Donate To During Black History Month
By Alexis Morillo
Kim Petras Just Made Grammy History
By Jake Viswanath
24 History-Making Black Women You Probably Didn't Learn About In School
By Ayana Lage and JR Thorpe
25 Inspiring Quotes From Black Women To Celebrate Black History Month
By Kyli Rodriguez-Cayro and JR Thorpe
Get Even More From Bustle — Sign Up For The Newsletter
From hair trends to relationship advice, our daily newsletter has everything you need to sound like a person who’s on TikTok, even if you aren’t.