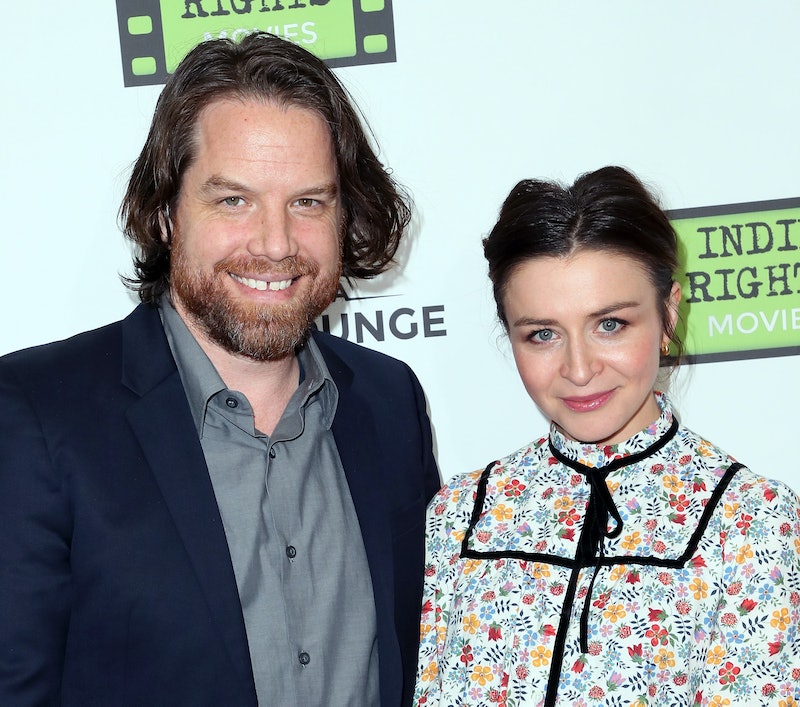 More sad news for 2020: Caterina Scorsone and husband Rob Giles have split after 10 years of marriage, Us Weekly reported on Friday, May 8. The actor, who plays Dr. Amelia Shepherd on Grey's, filed court documents that cited "irreconcilable differences" as the cause of the divorce, listing March 1 as her date of separation from the musician, according to the magazine.

A rep for the couple confirmed the news to Bustle in an email. "Caterina and Rob have separated. They remain friends and are committed to co-parenting their children in a spirit of love," their rep said in a statement. The pair, who welcomed a baby girl named Arwen in December, also shares daughters: Eliza, 7, and Paloma "Pippa" Michaela, 3.

Scorsone revealed her most recent pregnancy with an Addams Family-themed Halloween photo in which she was dressed as Morticia and cradling her pregnant belly on Nov. 1. "Our Family's about to get even kookier. #pumpkinintheoven," she captioned the photo. Giles (as Gomez) joined her in the photo, along with Eliza (as Wednesday), and Pippa (as Pugsley). Following Arwen's birth, the actor revealed in an April Instagram post that they "went with what was her middle name. Lucinda. "Lucky" for short."

The actor seems to be taking her separation in stride. Shortly after the news broke, Scorsone shared an inspirational Shondaland social media post to her Instagram Stories, according to People. The text of the image included a poem from Morgan Harper Nichols, which read: "Cling to joy. Bold audacious joy, that looks for Light in everything. Even when you're waiting."

Although she's largely kept her relationship private, Scorsone has spoken publicly about the challenges of motherhood over the years, especially in regard to Pippa's Down syndrome diagnosis. "My whole concept of what motherhood was had to shift," she explained on a March 2019 episode of the Motherly podcast. "When Pippa was born, and I realized that she had Down syndrome and she was going to have some physical differences and some cognitive differences…I didn't know what her capacity would be. It really did send me into a tailspin."

Despite their separation, the parents seem to be committed to continuing to amicably co-parent their girls.

More like this
Zach Explained Why He Had To Send Bailey Home Early On 'The Bachelor'
By Brad Witter
Airris From 'MAFS' Says He Doesn’t Regret Going To Decision Day With Jasmine
By Brad Witter
Shaq Might've Spoiled His Relationship Status With Kirsten After 'MAFS'
By Brad Witter
Vanessa Bauer Is Reportedly Dating Her 'Dancing On Ice' Partner
By Darshita Goyal
Get Even More From Bustle — Sign Up For The Newsletter
From hair trends to relationship advice, our daily newsletter has everything you need to sound like a person who’s on TikTok, even if you aren’t.