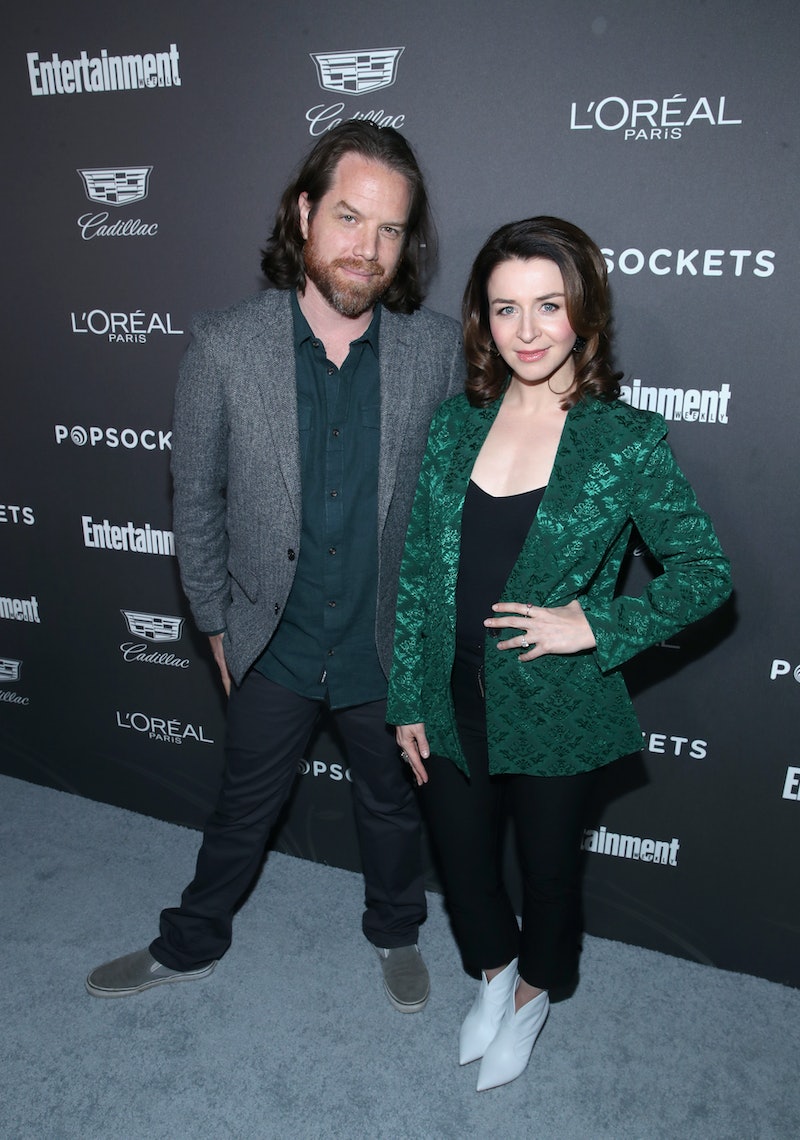 Much like her character on Grey's Anatomy, Caterina Scorsone revealed she's pregnant with her third child in a Friday, Nov. 1 Instagram post. The actor, who plays Dr. Amelia Shepherd on the ABC medical drama, captioned the Addams Family-themed Halloween photo of herself cradling her pregnant belly while dressed as Morticia Addams, "Our Family's about to get even kookier. #pumpkinintheoven " Joining Scorsone in the picture was musician husband of 10 years, Rob Giles (as Gomez Addams), as well as the couple's daughters Eliza, 7 (as Wednesday Addams), and almost-3-year-old Paloma "Pippa" Michaela (as Pugsley Addams).

Her real-life pregnancy mirrors that of Amelia, who learned she's expecting a baby with Link (Chris Carmack) in the September 2019 Grey's Season 16 premiere episode. The Canadian actor revealed to Bustle on Oct. 3 that she thinks "it's really brave" that Amelia and Link "decided to co-parent this kid." She admitted at the time, however, that the onscreen couple doesn't "have all the answers with regard to their relationship status and future." (Their coupling has since progressed significantly on the show, with Carmack's Link telling pregnant Amelia he's falling in love with her in a recent episode.)

Off screen, Scorsone has spoken publicly about the challenges of motherhood, especially following the November 2016 birth of Pippa, whom doctors have diagnosed as having Down syndrome, according to People. The actor said during a March 2019 Motherly podcast interview that she was initially sent "into a tailspin" when she realized Pippa "was going to have some physical differences and some cognitive differences." Her understanding of her "job as a mother completely distilled and opened," she added on the podcast, when a "simple voice" reminded her she's "supposed to keep her safe and ... make her feel loved."

Honoring Down Syndrome Awareness Month, Scorsone addressed some parents' worries about "the impact of having a child with differences will be on their other kids" in an Oct. 30 Instagram post. Along with a video of Eliza holding Pippa as they swayed to Beyoncé's 2013 song "Blue" (featuring daughter Blue Ivy), the actor wrote she wishes she "could show everyone the joy and sweetness and love that has expanded and grown in our family since Pippa was born." She went on to describe the sisters' relationship, adding that the girls are "crazy about each other and the differences give rise to a kind of tenderness" she "could only have wished for between typical siblings." Scorsone also called Pippa "truly the greatest gift" she could have given her big sister, in the caption.