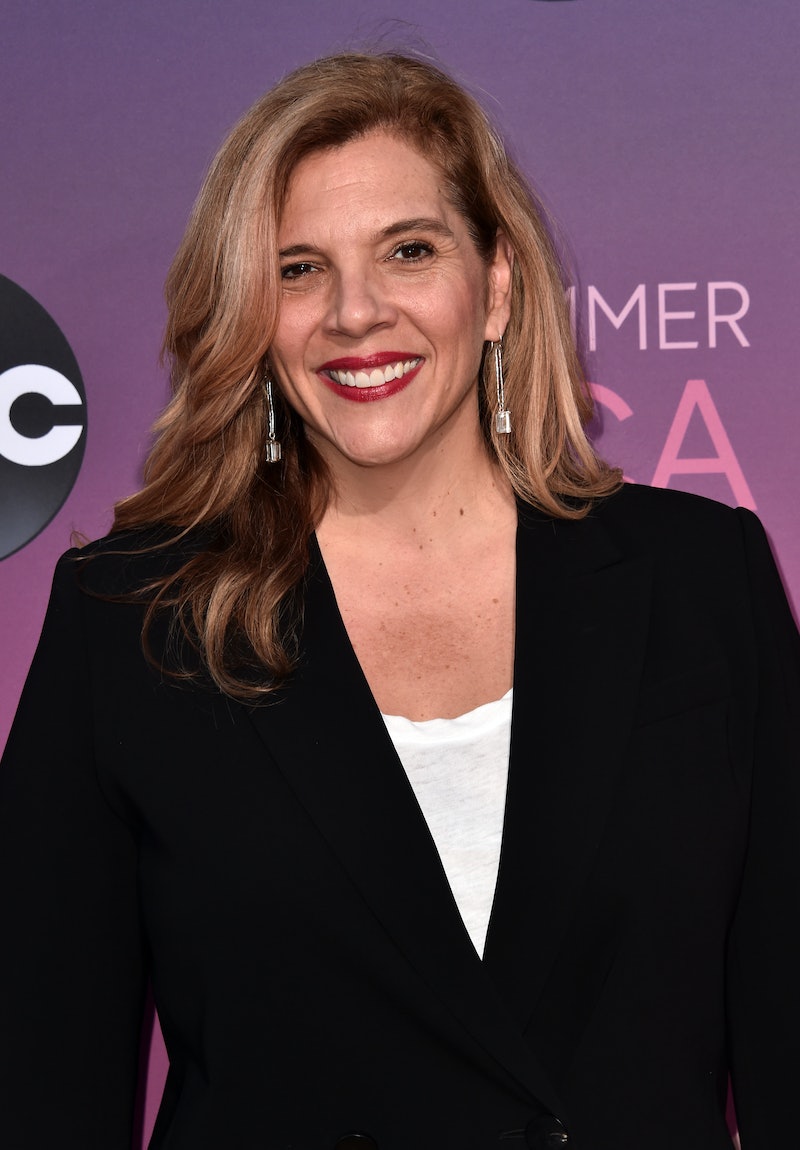 Krista Vernoff has never shied away from addressing important topics on Grey's Anatomy — or on her social media accounts. On Monday, June 15, the Grey's Anatomy showrunner advocated for defunding the police with a personal Twitter thread that detailed the ways her white privilege has protected her over the years during multiple run-ins with the law. Vernoff explained that her posts were meant to illustrate the way that "the system is broken," by showcasing the way that she has been treated by officers compared to the Black people who have been killed by police.

"When I was 15, I was chased through a mall by police who were yelling 'Stop thief!'" Vernoff began, revealing that she had "thousands of dollars of stolen merchandise" in her possession at the time. "I was caught, booked, sentenced to 6 months of probation, required to see a parole officer weekly. I was never even handcuffed." Three years later, she wrote, Vernoff was pulled over on suspicion of drunk driving, and she "pretended to have asthma" in order to avoid a breathalyzer test.

"The officer laughed then asked my friends to blow and when one of them came up sober enough to drive, he let me move to the passenger seat of my car and go home with just a verbal warning," she wrote. "When I was 19, I got angry at a girl for flirting with my sister’s boyfriend and drunkenly attacked her in the middle of a party. I swung a gallon jug of water, full force, at her head. The police were never called."

Vernoff then recalled an incident from when she was 20, in which she punched a man in the face in front of two officers. While the man demanded that Vernoff be arrested she wrote that instead, "the cop pulled me aside and said, 'You don’t punch people in front of cops,' then laughed and said that if I ever joined the police force he’d like to have me as a partner. I was sent into my apartment and told to stay there."

The writer continued, "Between the ages of 11 and 22, my friends and I were chased and/or admonished by police on several occasions for drinking or doing illegal drugs on private property or in public. I have no criminal record." Ultimately, Vernoff asked her white followers to think about their own pasts, and to analyze their own privilege — especially the fact white people are allowed to make "mistakes," while their Black counterparts are seen as committing crimes. "Think of all the mistakes you’ve made that you were allowed to survive," she encouraged followers.

"Defunding the police is not about 'living in a lawless society.' It’s about the fact that in this country, we’re not supposed to get shot by police for getting drunk," Vernoff wrote, referencing the recent killing of Rayshard Brooks at the hands of an Atlanta police officer. "The system that lets me live and murders Rayshard Brooks is a broken system that must change. Stop defending it. Demand the change." Vernoff also added her support for activists' ongoing campaign to defund the police, which would, among other things, reallocate excessive law enforcement budgets towards community programs like mental health resources and food assistance.

Ava DuVernay — a founder of the Law Enforcement Accountability Project, advocate for justice reform and director of 13th — shared Vernoff's thread on her own Twitter account, and praised her willingness to be honest about the ways she's benefitted from white privilege. "This is a white woman talking honestly about her experiences," DuVernay wrote. "And it's one of the best threads on the criminalization of Black people that I’ve read lately."

As people continue to protest against racism and inequality all over the world, it's good to see that people in the spotlight are reflecting on their own lives, and not just supporting a hashtag.