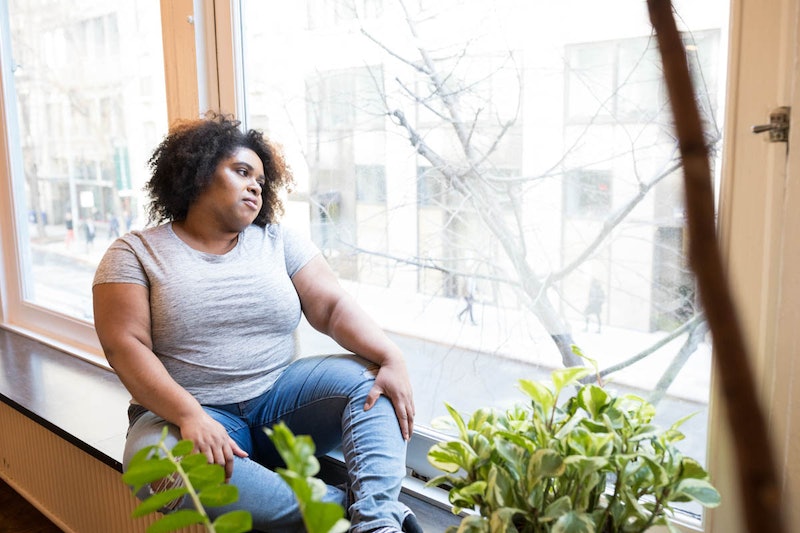 Grief and depression both have the ability to turn your life upside down, but it's commonly understood that grief will likely become less painful after a time, while depression can linger if left unchecked. "When we think about the difference between temporary sadness, grief, and clinical depression," psychotherapist Whitney Hawkins tells Bustle, "we are talking about three different diagnoses." But the lines between grief and a diagnosis of depression can be blurred, particularly because grief can develop into depressive episodes in certain circumstances. It's important to know what's considered a normal reaction to serious life difficulties, and what indicates the development of a mood disorder.

The emotional signals of grief and the symptoms of depression can indeed overlap. Grief counselor Amanda Ruiz tells Bustle, "Symptoms include a general feeling of sadness or feeling down, loss of energy and/or motivation, decreased interest in activities that you previously enjoyed, any significant changes in your eating/weight/sleeping, feelings of worthlessness, indecisiveness or inattention, and thoughts of death or dying."

However, if you've just experienced a serious event, like the loss of somebody important, experts explain that your recovery from this event can influence a depression diagnosis. Ruiz tells Bustle, "The same symptoms that are characteristic of Major Depressive Disorder can be present during bereavement. However, sadness crosses the threshold into depression when these symptoms are present for more than two months after the loss or life event," she tells Bustle. "You can seek professional help with any circumstance you are struggling with, whether it’s temporary or not, but you should consult a professional if these symptoms are persisting for more than two months after the life event." Depression that doesn't arise from grief, meanwhile, tends to be diagnosed in a much shorter time period; two weeks of consistent symptoms tends to be the recommended point at which a person should seek professional help.

There are also other explanations for long-term emotional issues as you're grieving. If you're grieving, Hawkins tells Bustle, you may be suffering from an adjustment disorder, not a depressive issue. "Adjustment disorders," she says, "are like temporary sadness or 'adjusting' to a stressor. They happen when someone develops clinically significant emotional or behavioral symptoms in response to an identifiable psychosocial stressor(s)." She tells Bustle that these symptoms are all part of the process. "Once the stressor or consequences of the stressor have ended, the symptoms should not continue for more than an additional six months. Adjustment disorders can be accompanied by depressed mood and/or anxiety. Common stressors include divorce, illness, loss of a pet, peer conflict, financial issues, or job loss."

People in this position don't have necessarily have major depressive disorder; they're trying to reconfigure their emotional lives. And this process can take a long time; psychotherapist Dr. Fran Walfish tells Bustle, "According to the DSM-V, 'grief' is a diagnosis that is allowed for a period of only one year following the demise of the lost one. However, many people require longer than one year to come to a place of acceptance."

But there are other distinguishing factors that separate these conditions. One, Dr. Walfish points out, is the unrelenting nature of depressive symptoms. "People suffering from grief experience sadness and depression intermittently, while those dealing with depression get no relief from their continual sadness," she tells Bustle. Psychologist Laura Chackes tells Bustle that "clinical depression involves persistent sadness (most of the day nearly every day) that is not attributable to a loss or specific life circumstance."

According to psychologist Jared DeFife, depression has characteristic thought patterns that separate it from grief and sadness. "In grief, it is extremely common to have recurrent thoughts about your lost loved one," he tells Bustle. "These thoughts and memories can sometimes even be intense, intrusive, and catch you off guard. Depression sufferers, on the other hand, can struggle with a mind that tends to attack itself. Feelings of unworthiness, self-criticism, extreme guilt, and an internal sense of 'badness' are much more characteristic of depression."

The experts agree on a very key point: no matter how you're feeling or what you think the issue may be, it's OK and important to seek help. Grief counselor Kayce Hodos tells Bustle, "There is no shame in reaching out for help, and you can seek counseling whenever you feel you need it. Whether it’s grief, depression, excessive worry, stress, or feeling overwhelmed, if you feel like you could use some support, search your area for a professional counselor. It can make a huge difference simply having an unbiased party to sit with you, listen to your story, and be present with your emotional pain."

And they all reiterate that there's no minimum standard. "There’s no requirement that you have to be depressed or grief-stricken enough to need professional help," says Hodos. Chackes agrees. "If you're ever unsure whether your symptoms meet the level of clinical significance, it never hurts to seek help," she tells Bustle. "We are happy to help you determine whether therapy or medication could be helpful to you, and we often treat people who do not have clinical depression but just want some coping strategies to help deal with their sadness or stress."