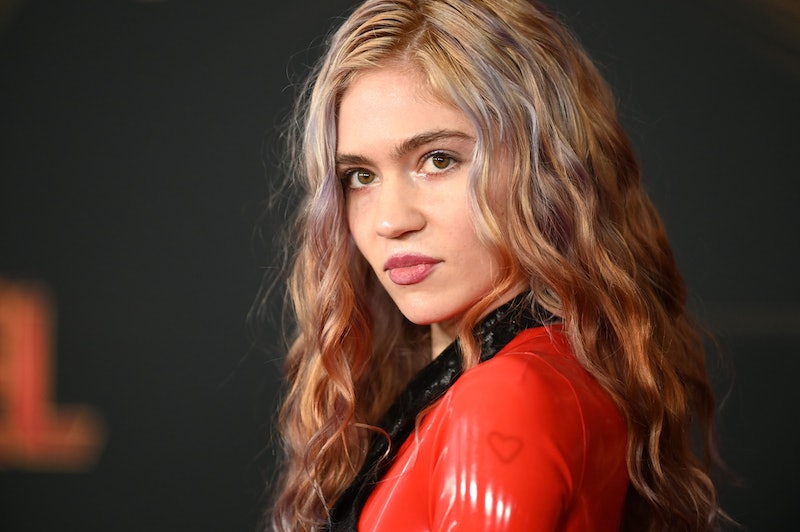 Whether Grimes and Elon Musk's newborn baby likes it or not, his name, X Æ A-12 Musk, is going to be the hottest and most debated baby name of the year. Shortly after becoming the top trending topic on Twitter, Grimes explained her baby name's meaning — kind of. While people are still confused the couple's choice, it actually holds a more sentimental meaning to them than people may think.

In a tweet posted late on Tuesday, May 5, just a day after giving birth to X Æ A-12, Grimes broke down the name letter by letter for fans to understand the meaning behind it. X is "the unknown variable," which basically means that she and Musk just thought it was cool. Æ, the Latin diphthong, is actually the singer's "elven spelling of Ai" which means "love &/or Artificial intelligence." Basically, there is a slight possibility that this baby is indeed a robot.

Grimes said A-12 was a "precursor to SR-17," which is her and Musk's favorite aircraft. "No weapons, no defenses, just speed," she wrote. "Great in battle, but non-violent." This was before Musk quickly slid into her replies and corrected the name of the aircraft to SR-71. She was devastated about the typo. "I am recovering from surgery and barely alive so may my typos b forgiven but, damnit. That was meant to be profound," she responded back to him.

Additionally, as many fans suspected, she confirmed that the A also stands for "Archangel," the inside code name of the A-12 aircraft. She also said that "Archangel" was her favorite song, and nobody has any clue about what that exact song could be. It may also simply be a spin on her own 2015 track "Artangels" from her album of the same name. To make everything even more confusing, she ended her tweet with the phrase "metal rat" complete with sword and mouse emojis. Is that his nickname? His first Halloween costume? At this point, who knows?

When asked by a Twitter follower if she realized that X Æ A-12 was the name of a human and not a project, she gave more insight about what it means to her. "I think it sounds like the name of the main character in the story," she explained. "I hope he vibes with that." This is actually a very sweet thought, though it's worth noting nobody has any idea how Grimes and Musk are actually pronouncing her son's unique name.

More like this
Twitter Is Saying The Same Thing About Beyoncé's Renaissance World Tour
By Shahed Ezaydi
How To Buy Tickets For Beyoncé’s UK Renaissance Tour Dates
By Shahed Ezaydi
8 Easter Eggs From Taylor Swift's “Lavender Haze” Music Video
By Shahed Ezaydi
Twitter Can’t Believe The Madonna Biopic Is Scrapped & Fans Have A Solution
By Alyssa Lapid
Get Even More From Bustle — Sign Up For The Newsletter
From hair trends to relationship advice, our daily newsletter has everything you need to sound like a person who’s on TikTok, even if you aren’t.