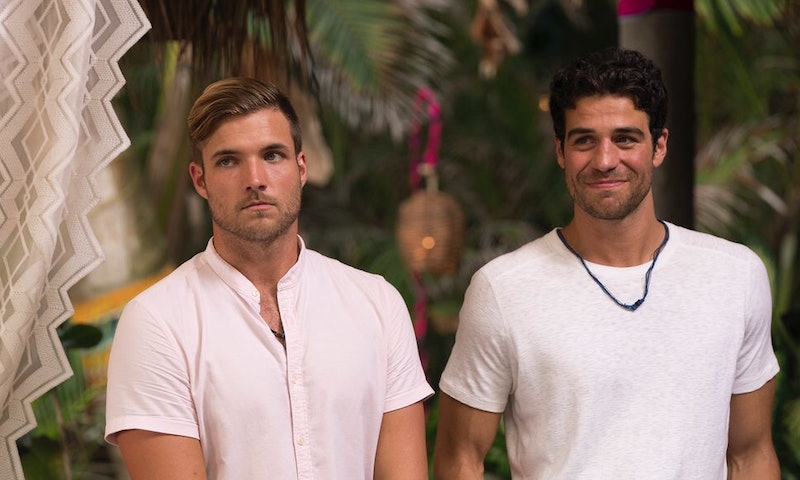 If you thought Grocery Store Joe Amabile's smile was contagious, try combining it with golden underwear-modeling Jordan Kimball's pearly whites and a "grimy, sexy" version of a salsa dance. That's right, Joe and Jordan performed on Dancing With The Stars in a special trio episode, and let's just say, it's getting hot in here.

The spicy salsa's backtrack was Joe's choice of "I'm Too Sexy" by Right Said Fred and included matching denim overalls and GIANT ROSES, no less. "I just think it's a funny song," Joe said on the show. "It's a great song. It's really catchy, makes you want to dance." The number ended with a shirtless, saucy shower fans will never forget. Can you say Magic Mike XXXL?

Although Jordan doesn't like to admit his faults, he confessed during DWTS rehearsals with Joe's partner, Jenna, that he's never really danced professionally before — especially when it comes to the salsa variety. "If I go out to the club, I do a little two-step number right here," he said as he enthusiastically disco pointed and crossed his legs. "That's my thing, and this is far from that."

Indeed, it was. In Joe's words, "body grinds" were involved. And of course, Jordan was pushing for the inclusion of his iconic modeling poses as the dance was choreographed. Joe says the song and the dance definitely brought him out of his shell, whether he liked it or not. And Jordan, on the other hand, has never let a shell get in his way, so it made for the perfect collaboration. "I've been sexy my whole life," he said on the show. "But I've never been salsa sexy." Until now.

As if Joe and Jordan's Bachelor in Paradise-born bromance couldn't be any more endearing (or sexy, apparently), their push-up (yes, the exercise)-clad routine just took it to the next level. In her blog with Us Weekly that's chronicling her season's journey with Joe, Jenna wrote that Jordan was the perfect third wheel for this week's episode. Considering that Joe's biggest struggle on stage has been confidence, Jordan definitely has enough to pass around, and it showed. "He exudes confidence and charisma, and they are great friends," Jenna wrote. "I think it will be awesome to have another male figure in the rehearsal room. He’s gonna bring this masculine energy out of Joe. I think Joe’s going to feel safe out there and he’s going to be super pumped to do our salsa."

She couldn't have been more spot on, and fans agree. Joe told ET the three of them would paint the board with tens, and well, towel and robe-laden after being scandalously drenched with water Nickelodeon Slime Time Live-style, the judges gave them half that, bringing their grand total to 15 out of 30 points. Some of those were possibly stolen by Jordan's inability to rip his shirt from beneath his overalls in one swift motion and their occasional lack of rhythm, but in the end, it was the still the groovy reunion Bachelor Nation needed. And everyone could probably agree that they would watch it again. And again. And again.