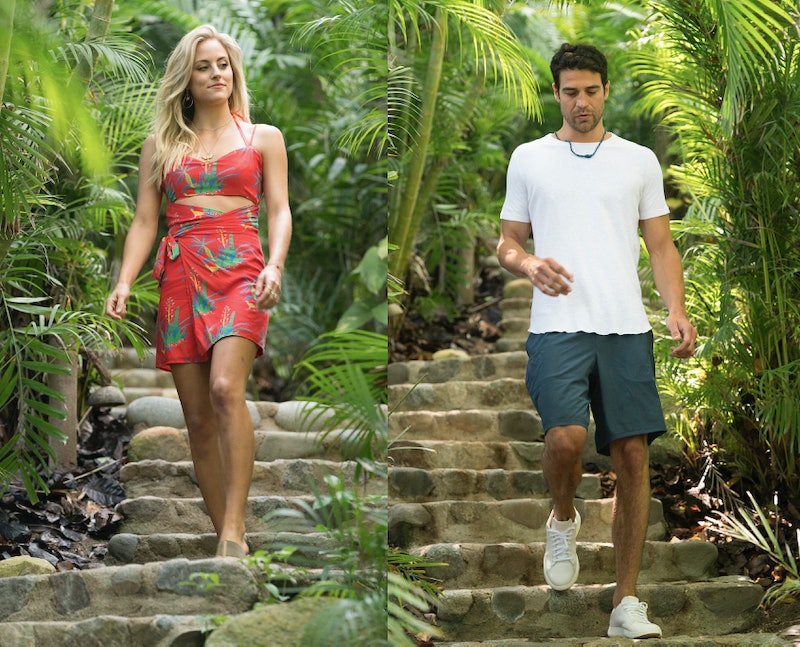 He may have been eliminated on night one of Becca Kufrin's season of The Bachelorette, but he's back for a second chance at love. It's official: Grocery Joe is on Bachelor in Paradise, and it's clear that he's already a favorite. And not just where the fans are concerned, either; the ladies in paradise were all interested in getting to know him a little better, especially Kendall and Krystal. But much to Krystal's dismay, Kendall and Grocery Joe immediately hit it off on Bachelor In Paradise, and so far, Twitter seems to be feeling very conflicted about it.

Of course, it's important to note that Kendall and Joe started talking just as soon as they both arrived in Paradise; they seemed to have an instant connection, and within minutes of meeting, they were deep in conversation. Considering how quickly Joe was eliminated on The Bachelorette, it was really the first chance that fans got to see his personality really come through, and judging by their tweets, it doesn't seem like they were disappointed — and it also didn't seem like Kendall was disappointed, either.

In fact, plenty of people are already shipping Joe and Kendall together. It may be premature, but based on what we've seen on BiP so far, they definitely have a chance.

People Are Feeling It

People were also a little puzzled by Kendall and Joe's first conversation in Paradise, which was, admittedly, a little bizarre. Remember Kendall's taxidermy collection? Her interest in all things creepy is still going strong, and she let Joe know right away when she brought up that she loves having picnics in cemeteries, because they're beautiful, they're quiet, and you can always park wherever you want. To be totally fair, all those things are true, but it was a little hard for fans to follow. And somehow, Joe has never been on a picnic, which is also hard to believe.

This tweet pointed out something very important: nobody should have been surprised by this conversation at all, because we all remember that she and Arie had a whole Dinner For Schmucks moment on The Bachelor. This is just par for the course.

There's also Joe's response to this, too. He doesn't do picnics? You sell groceries that people take on picnics, Joe. You should try it sometime.

Other people also just straight up respected Kendall for being so unapologetically herself, because if you weren't totally comfortable with who you are, would you really be bringing this kind of stuff up on your first meeting with someone?

It's too early to tell if Joe and Kendall will go the distance, but so far, it definitely seems like they've gotten off to a good start. He may not have had a chance to prove himself with Becca, but Kendall seems determined to get to know him — and he wasn't even a little put off by the fact that she wants to go have lunch in a cemetery. Maybe they're a perfect match? Only time will tell.