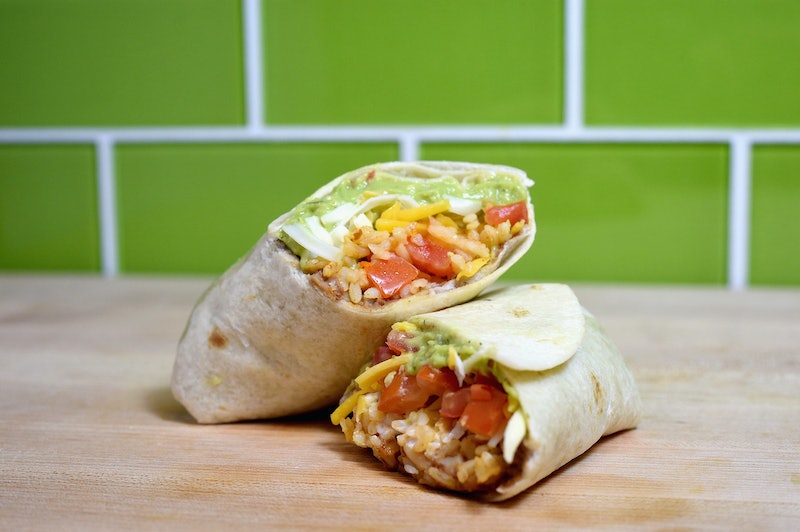 The three words most everyone wants to hear this Valentine’s Day are “let’s order in.” In anticipation of February 14, GrubHub released their most popular Valentine’s Day orders for both couples and singles. So, if you’re planning to spend your Valentine’s Day at home, either with your date or by yourself (which can also count as a date), perhaps you’ll get a few ideas for your at-home menu.

Let’s start with the survey’s logistics: how exactly did GrubHub determine whether an order was for a couple or just a single person? According to an emailed statement to Bustle, GrubHub used “factors such as the number of entrées ordered and price.” (If you heard something, that was just the collective *gulp* of everyone who has ever ordered enough food for a family of four and planned to eat it all themselves.) In other words, this list of most popular Valentine’s Day GrubHub foods comes with that caveat: people placing ordering didn’t clarify whether the food was for themselves or for two.

With that in mind, there seems to be a clear divide between couples and singles when it comes to Valentine’s Day take-out orders. For singles, comfort food dominated the list. Things like burritos, quesadillas, and pho were ordered by single people 119 percent to 210 percent more than couples. Perhaps you’re less worried about eating a burrito the size of your face when you are in the company of only yourself.

Here is the full list of food singles ordered more on GrubHub often than couples:

If you aren’t familiar with the food claiming the number one spot, a pizza puff is basically what a Hot Pocket dreams of becoming. It’s a deep-fried dough pocket filled with all your favorite pizza topping: cheese, tomato sauce, cheese, pepperoni and/or sausage, and did I mention cheese?

Given the lists comfort food-leaning, I’m surprised orders for mac and chese, pad thai, burgers, and all of the pasta dishes aren’t on the list. Perhaps couples and singles recognize the romantic potential for those dishes, thus making them a frequent order for all.

What’s on the menu for couples ordering in on Valentine’s Day? Chicken satay and sushi, apparently. While chicken satay holds the number one spot on the list, almost all of spots two through ten are claimed by different kind of sushi rolls. (Shrimp shumai, a kind of Chinese dumpling, snuck in at number five.) Apparently raw fish is the love language of many couples. Here’s the full list:

In 2016, GrubHub partnered with Match.com and found that ordering sushi on a first date increased the odds of a second date by 170 percent. So, go ahead order than eel avocado roll on date number one, I guess.

It’s a little surprising pizza (not in roll or puff form) didn’t make the list. However, that may be due to how the data was aggregated; it’s kind of hard to tell how many people will be eating a pizza. (A large could be for two people or four people or one person whose idea of romance is eating cold pizza for breakfast the next morning.)