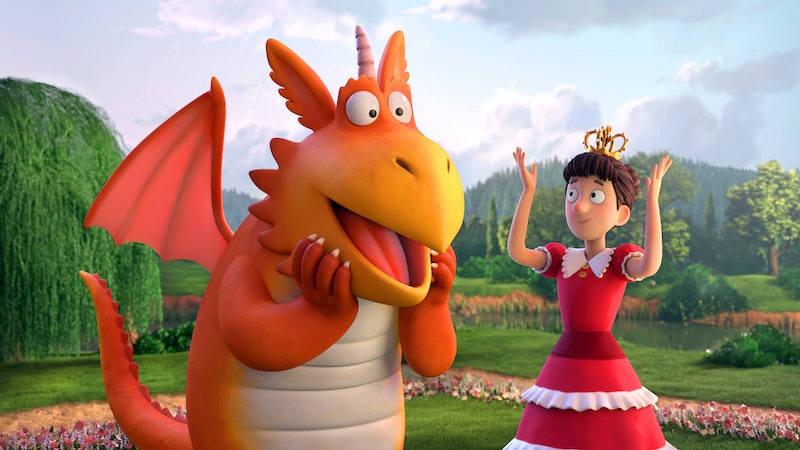 One festive treat to look forward to this Christmas is the BBC animation Zog, a television adaptation of the beloved children's book of the same name. The Christmas Day special follows the story of Zog, an accident-prone dragon, and is created by the team behind The Highway Rat, Stickman and The Gruffalo. The animation is also voiced by an impressive cast, but who are the guest celebrity voices in Zog?

According to the Radio Times, actor and comedian Sir Lenny Henry is at the helm of the BBC adaptation as the show's narrator. The remainder of the all-star lineup includes Game Of Thrones star Kit Harington as Sir Gadabout, a knight who is keen on rescuing Princess Pearl. Hugh Skinner, who recently starred in Mamma Mia: Here We Go Again, will voice the lead role of Zog, a young dragon who is completing his training at Dragon School.

Madame Dragon, who oversees all training at the Dragon School, is portrayed by the Emmy-winning comedian, Tracey Ullman. And Jamestown actress, Patsy Ferran, lends her voice to the character of Princess Pearl, a young princess who has dreams of one day becoming a doctor. Zog is scheduled to air on BBC One on Christmas Day, and there is more poignancy to this seemingly harmless animation than you might expect.

The upcoming animation includes some very relevant concerns about female empowerment — and when asked if the story was indeed a feminist one, the BBC director of content, Charlotte Moore, told the Radio Times, "Absolutely it is a feminist story." At a screening of the BBC Christmas special, co-author of the original book, Julia Donaldson, revealed that Zog did not intend to have feminist leanings, but admitted that the story could be interpreted as such. She said:

"Your underlying principles and ideas subconsciously come out in the stories. I have received lots of letters from parents of girls saying it had a strong feminist message but I admit I didn’t write it with that in mind... Nowadays most children’s books girls are quite feisty."

Donaldson then went onto reveal that feminism can also be found within the book's sequel, Zog and the Flying Doctors.

The original children's book was first published in 2010, and has since gone on to sell more than 1.5 million copies. In addition to the amazing sales, Zog was also awarded with the Galaxy National Children’s Book of the Year Award. Michael Rose, the co-founder of Magic Light Pictures - the production company behind the TV — spoke about the on screen creation of this much adored story. As the Radio Times reports, he said: "It’s wonderful to be bringing this amazing Donaldson/Scheffler title to BBC One following The Highway Rat’s success. Zog is a tremendous character in a world of dragons, princesses and knights, an adventure the family can all enjoy watching together."

As previously reported, Magic Light Productions are also responsible for other incredible animations including The Gruffalo, Stick Man, and Roald Dahl’s Revolting Rhymes — all of which have earned the broadcaster an impressive total of 19 million viewers, after being included across much of the 2017 BBC One Christmas and New Year schedule, Radio Times reports.