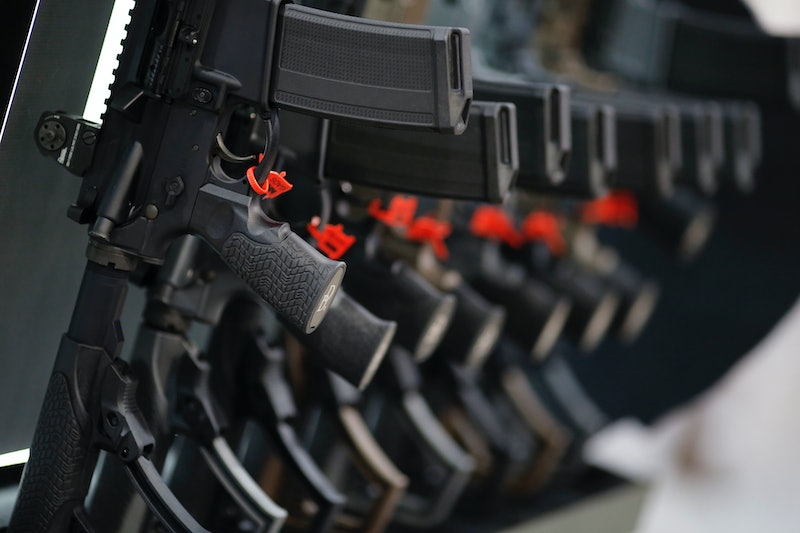 As the nation tried to make sense of the awful killings in Las Vegas on Sunday night, something odd was happening on Wall Street trading floors and in online trades around the world. After the Las Vegas shooting, stock prices of gun manufacturers were on the rise the next day, with those of the biggest American brands ending up around 3 percent higher. It's hard to believe that when many people across the country are railing against guns, those who make them could somehow benefit financially — but there is a reason.

Gun manufacturers' soaring stock prices on Monday came on the heels of the deadliest mass shooting in modern American history. At least 59 people died and 500 more injured at a country music festival on the Las Vegas Strip when a gunman opened fire from his hotel window onto the crowd below. In the wake of mass shootings, analysts have pointed out that gun makers' stock prices soar. It happened after the Pulse nightclub shooting in 2016, and it happened again on Monday.

American Outdoor Brands, the maker of Smith & Wesson, initially jumped 7 percent. Sturm, Ruger & Co. was up 6 percent initially, according to CBS News. The other big American manufacturer, Freedom Group, which makes Remington, isn't publicly traded. The reason, many analysts say, is that some American consumers fear regulations or some form of gun control. So the rise in gun manufacturers' stocks is basically due to the fear of gun control, the one thing that would best address violent attacks like this one.

Here's how it works. When there's a shooting, many start to think that Congress will actually do something about it, Fast Company's Melissa Locker explained. Many of those who buy guns fear regulations on their right to bear arms, and so they rush to buy guns before any new law or limitation could come into effect. Those profits all head to the gun companies.

Take a look at what happened after the Newtown shooting: profits were way up for the biggest gun companies. They raked in some $632 million in three years, all way over prior numbers. And so since Sandy Hook, this has been the pattern.

Interestingly, after that elementary school mass shooting, stock prices actually went down. But now investors have learned that gun control is highly unlikely; even in the worst of circumstances under a Democratic president, no bill was passed. An increase in sales is what gun manufacturers have come to expect.

And now, with a Republican president in the White House, it seems they have even less to worry about. Bloomberg took a look at gun sales during the Obama years after the Pulse shooting, and they were way up. Now, under Trump, MarketWatch reports that American Outdoor has seen sales slump 38 percent, and Sturm, Ruger & Co. has had business go down by 22 percent.

Under Trump, people are less worried about their guns being taken away because they suspect he won't do anything about it. And that's something you can see in the course of trading on Monday. Those two big American brands jumped 7 and 6 percent respectively, but they were only up just over 3 percent by the closing bell.

Now, part of that was likely a normal correction, but the drops back down began as President Trump was set to address the nation at 10:30 a.m. ET. If you look closely at the charts, you can easily see that they dropped almost continuously until his remarks finished, just before 11:00 a.m. ET, and then they started to bounce back a little bit after. In his speech, Trump did not mention the word "gun" or even hint at gun control, perhaps assuring many that there would be no legislative push from the White House to do something about the country's gun problem.

It was seen as a long shot to begin with, but Trump's words were a comfort to those who want unrestricted access to firearms. And if there's no coming regulation, no hurry to buy, and thus lower sales for gun manufacturers in the short term. That, in turn, translates to lower stock prices.

Perhaps the best thing to take away from this is that gun stocks are still up some, so maybe there's a hope for gun control after all — even without Trump acting on the matter.