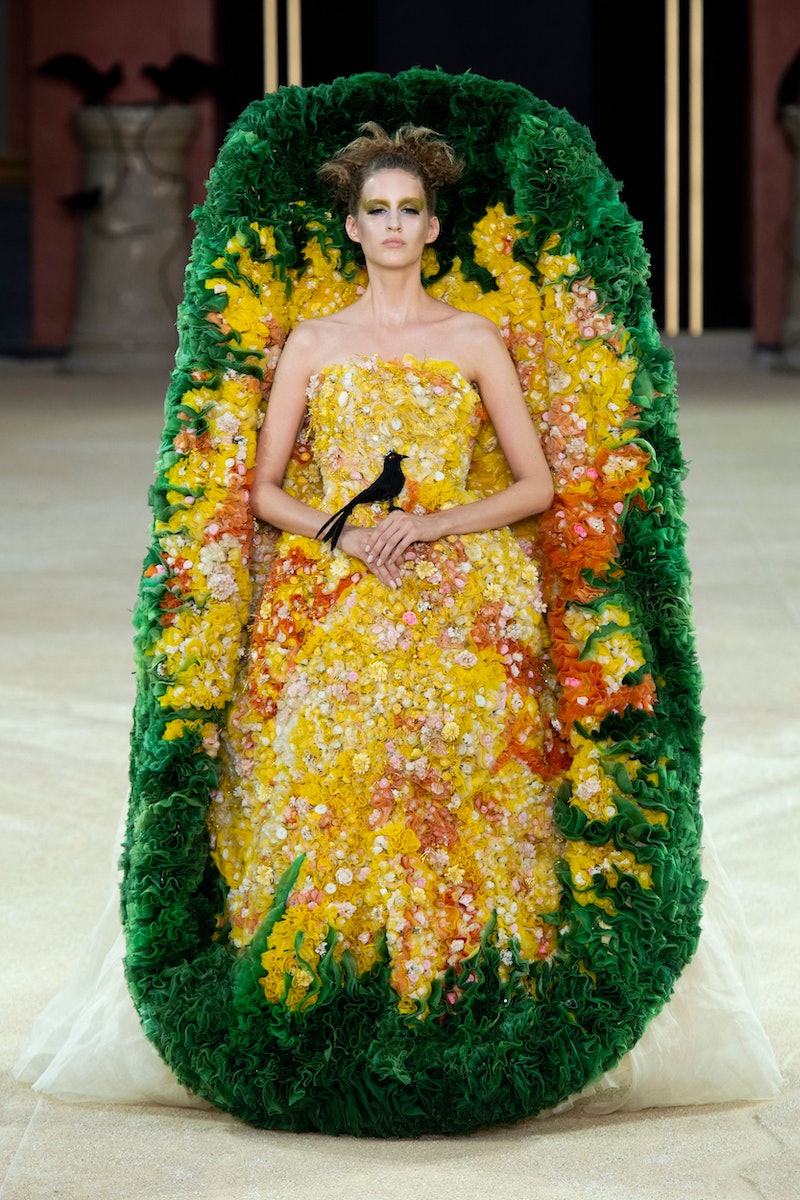 Haute Couture Fashion Week in Paris is a chance for designers to forget fashion forecasts and the demands of buyers, and instead focus on marching works of art down their runways. One designer did just that, though her inspiration might make you hungry. Guo Pei's Fall 2019 Couture show had a dress that looked like a burrito bowl, proving that Tex-Mex could be stylish.

According to Vogue, Pei described her collection as “an alternate universe,” and cited her childhood curiosity with death as the inspiration. “When I was a child, I often thought about death,” the couturier shared with the magazine. “Where do we go? I think a lot of people think about this.”

The line featured Renaissance dresses, Marie Antoinette-like corseted gowns, 1950s cocktail dresses, and frocks that were structural works of art. The final dress in the show fit into the latter category, and it took Pei seven years to create, on-and-off. The gown had a casket-like feeling, with the dress being self-enclosed and mimicking a plot of grass with embroidered flowers. A single raven was worn like a bracelet on the model's hand, giving the audience the vibe that she was a glamorously buried person that was on her way to the afterlife. But at first glance, the dress doesn't look like a couture grave. Instead it looks like a burrito bowl.

If you have ever nipped into Chipotle for a quick lunch, then you will know just how a burrito bowl looks like. Encased in a white carton bowl, the meal has a base of rice that is overlaid with lettuce and beans. A healthy smattering of tomatoes, corn, and your choice of meat is laid on top, and the bowl is finished off with sour cream, guacamole, and salsa. The couture dress seemed to have captured that spirit perfectly.

While that was the finale dress in the show, that wasn't the Chinese designer's only fantastical design. The runway was full of gowns that were whimsical and macabre all at once. For example, the show opened with a 17th-century inspired ballgown that was made for two folks wearing it at the same time. The dress was decorated with crows, which held a special meaning. "Crows play an essential role in Guo Pei’s Alternate Universe. At the border between life and death, crows are the messengers of wisdom, shuttling the universes for his compatriots in the forms of hand-embroidered beetles, spiders, butterflies and bees," the brand's Instagram shares.

This isn't the first time that Pei created a frock that resembled a tasty food choice. Pei was also the designer behind Rihanna's iconic Met Gala 2015 dress. The artist wore the yellow fur-trimmed dress to the Ball's theme, China: Through the Looking Glass.

The gown was handmade solely by Pei, and it took her two years to complete. Rihanna was one of the few attendees at the 2015 Met Gala to wear a Chinese designer, and while the dress was the unofficial winner of the Gala, the gown was also compared to a massive omelette and cheese pizza.