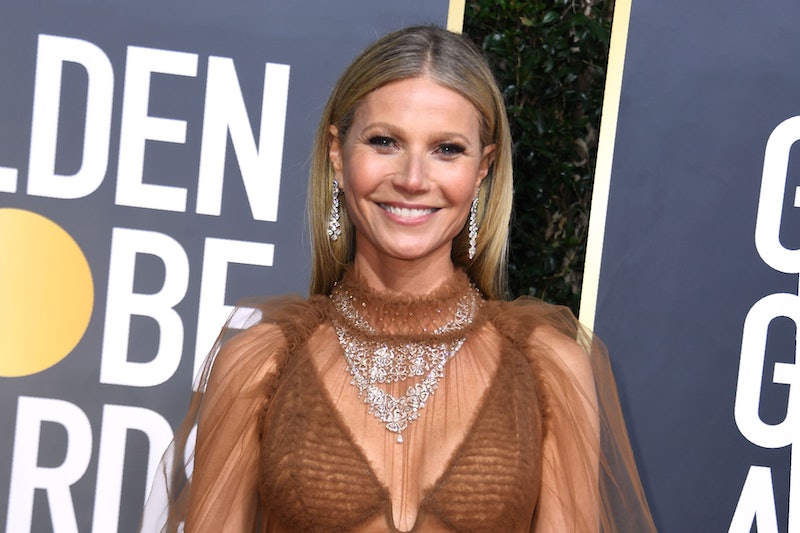 Five years after their decision to "consciously uncouple," the Martin-Paltrows have formed a very modern family with their new partners. In a recent interview with Harper's Bazaar, Gwyneth Paltrow talked about her relationship with Dakota Johnson, who is currently dating her ex, Chris Martin. She has nothing but love for the Fifty Shades of Grey star, despite her romance with Paltrow's ex. And frankly, the Oscar winner doesn't care if anyone thinks their new family unit is a little unusual.

"I love her," Paltrow told the magazine for their February cover story. "I can see how it would seem weird because it’s sort of unconventional. But I think, in this case, just having passed through it iteratively, I just adore her." In fact, Paltrow has so much affection for the actor that in October, she actually posted a sweet birthday tribute to Johnson on Instagram, describing her as "an absolute gem."

She continued, "I always start to think of the ampersand sign — what else can you bring in, instead of being resistant to or being made insecure by? There’s so much juice in leaning in to something like that." Part of that was made easier by the fact that Paltrow and Martin see their relationship as constantly evolving, despite their divorce. "It’s not like there’s a finish line: 'Oh, we consciously uncoupled; we’re done.' It’s a lifelong commitment to constantly reinvent your relationship with your ex, which you do presumably because you have children together."

"I think we put all the hard work in at the beginning," she continued, explaining that it's easier for her and new husband Brad Falchuk to form a family unit with Martin and Johnson now, five years on. "I would say very rarely is it difficult now," she said. "We have the best of each other. It’s really nice. It makes you feel like you don’t have to lose."

Paltrow and Martin released their now-famous statement about "consciously uncoupling" back in March 2014 after ten years of marriage, and the Oscar winner was first linked to Falchuk in August of that year, according to Us Weekly; they tied the knot in September of 2018. Johnson and Martin, meanwhile, were first spotted together in October of 2017, and a source told People in April of 2019 that things were "serious" between the two of them. Despite their new relationships, Paltrow and Martin have both spoken about their commitment to making their blended family work.

"I’m very, very lucky that I have a partner who’s willing to [coparent] with me in a really collaborative way. I’m really for Chris and he’s really for me and our children are our priority," Paltrow said at the #BlogHer15 conference in 2018. "It’s definitely imperfect," she admitted, though the Oscar winner was quick to add that she and Martin are "really great friends" and that the musician is a "great dad."

"[Divorce] doesn’t have to be the end of your relationship with somebody," Paltrow told the UK's Evening Standard in January 2019. "I think Chris and I were meant to be together and have our kids. But our relationship is much better like this: friends and co-parents and family." By embracing their new relationship as co-parents, as well as each other's new partners and family, it's clear that Paltrow and Martin have found a balance that works for them — and that Paltrow and Johnson are the coolest new friends in Hollywood.

More like this
Everything You Need To Know About Kanye's Post-Kardashian Dating Life
By Bustle Editors
Bennifer's Relationship Timeline Now Includes A Grammy Date Night
By Jake Viswanath
Vanessa Hudgens Is Reportedly Engaged To Cole Tucker
By Jake Viswanath
Pamela Anderson’s Dating & Marriage History Could Be Its Own TV Series
By Jake Viswanath
Get Even More From Bustle — Sign Up For The Newsletter
From hair trends to relationship advice, our daily newsletter has everything you need to sound like a person who’s on TikTok, even if you aren’t.