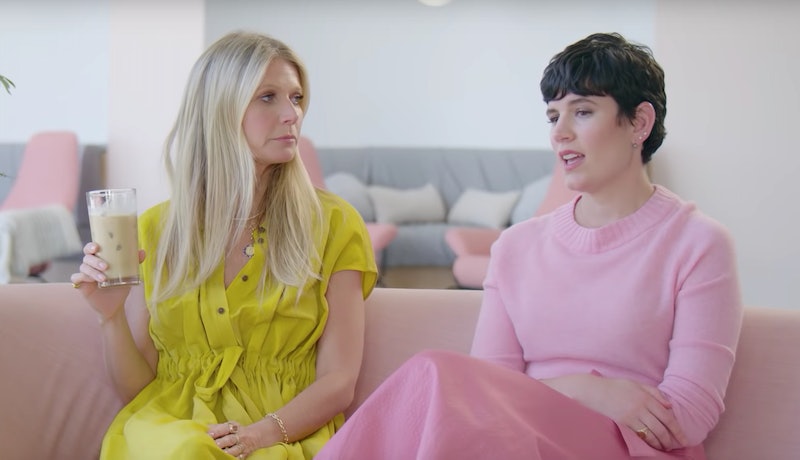 Energy exorcisms and psychedelic drugs are just some of the unusual alternative therapies explored in Gwyneth Paltrow’s The goop Lab. Opinions have been split over the new Netflix series, but now the NHS England Chief has deemed The goop Lab “irresponsible,” believing it to pose a "considerable health risk" to the public.

The six-part program takes place at The goop Lab, the headquarter's for Paltrow's famous wellness brand, goop. In the show, Paltrow and her editorial team, with the help of doctors, researchers, and alternative health practitioners, try various treatments and explore topics including anxiety, sexual expression, and trauma.

While Netflix says the series is "designed to entertain, not provide medical advice,” per the BBC, NHS England Chief Simon Stevens has accused the show of "misinformation."

"[G]oop has just popped up with a new TV series, in which Gwyneth Paltrow and her team test vampire facials and back a body worker, who claims to cure both acute psychological trauma and side-effects by simply moving his hands two inches above a customer's body," Stevens said. "Her brand peddles psychic vampire repellent, says chemical sunscreen is a bad idea, and promotes colonic irrigation and DIY coffee enema machines, despite them carrying considerable risks to health."

It's not the first time goop have come under fire from medical professionals. Famously, in 2018, goop agreed to pay $145,000 (rouhgly £112,000) for making "unscientific claims" about the "vaginal eggs" it was selling, reports BBC News. The wellness brand had suggested the eggs, which are inserted vaginally, "could balance hormones and regulate menstrual cycles," BBC News writes.

Paltrow's brand has been considered controversial ever since it began as newsletter in 2008. Now a lifestyle company reportedly worth over $250 million, goop has promoted vagina candles, vampire repellent sprays, and other quirky products and treatments often considered as Hollywood trends reserved those with a large expendable income.

Stevens is concerned about goop's potentially harmful influence. "While the term 'fake news' makes most people think about politics, people's natural concern for their health, and particularly about that of their loved ones, makes this particularly fertile ground for quacks, charlatans and cranks," he said.

Despite the very public criticism, goop have defended the science behind program. In a statement sent to Bustle via email, a goop representative stated that over half of the experts interviewed for the show were "doctors and research scientists from leading medical institutions."

The rep continued: "We clearly state that some of the procedures we explore on The goop Lab are emerging practices and the show is not meant to be a substitute for medical advice. A third party was retained to carefully vet each expert and fact check the statements made in the show. This process was handled by our Emmy-winning production company." The statement continues, "We advise that viewers should always consult their doctor when it comes to their personal health, or before starting any new treatments."