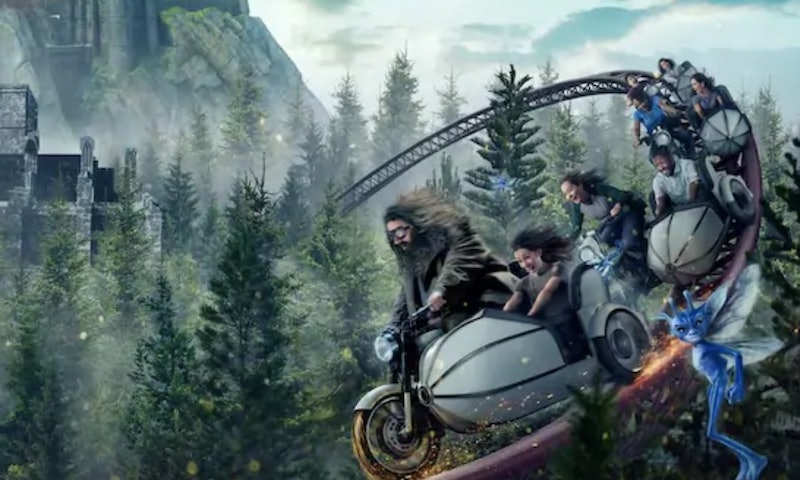 In news that will sound like a cruel joke to anyone who hates lines, some visitors to Universal Orlando waited in a 10-hour-long line to experience a new Harry Potter ride, as reported by Time. The roller coaster, called Hagrid's Magical Creatures Motorbike Adventure, is part of The Wizarding World of Harry Potter section of the theme park. A 10-hour line is anxiety-inducing to just think about, but apparently, a lot of people thought it was worth it, so what's the deal with this ride?

First, to be clear, the 10-hour-long wait occurred on the first day that the attraction opened, June 13. The Orlando Informer, an account all about theme parks, tweeted a screenshot from the Universal Resort app that showed the wait was 600 minutes. The Universal Orlando Resort account tweeted on Thursday morning that, at that time, the wait was eight hours.

The reason the line was even able to be so long is because visitors arrived to the park before it was open. This way, there was a line to get into the park while it was still closed, and then, because of this, immediately a massive line for the Motorbike Adventure. People who are passionate about theme parks don't mess around.

As of the afternoon of Friday, June 14, the Orlando Informer says the wait time is six hours. Time reports that on Friday, the park started using a virtual line for the ride that allows guests to be alerted when it's time for them to go join the physical line.

Hardcore fans of theme parks and Harry Potter probably want to ride every ride no matter what, but here's what visitors are actually getting from this particular $300 million ride.

Hagrid's Magical Creatures Motorbike Adventure takes riders on a mile-long ride through the Forbidden Forest. CN Traveler reports that this makes it the longest roller coaster in Florida — a place with a lot of roller coasters. Guests sit in cars that resemble Hagrid's motorcycle and reach speeds up to 50 mph. The Tampa Bay Times reports that the ride takes 3 minutes and 25 seconds.

A Lot Of Trees

The Forbidden Forest has to have a lot of trees. Time reports that Universal planted over 1,200 trees to form the forest.

The Most Launches Ever

According to CNBC, the new ride has the most launches — times when the roller coaster is physically propelled forward again rather than depending on gravity — of any roller coaster ever with a total of seven.

The roller coaster is only the second one in the country to feature a vertical free-fall drop, according to the Tampa Bay Times. And it has a 17-foot drop. Still, the newspaper reports that the ride is "not especially scary." There is a height requirement of 48-inches, though.

This ride moves both forward and backward. If the ride suddenly reversing doesn't sound good to you, it might be best to skip this one. (And the massive line.)

Of course, a ride called Hagrid's Magical Creatures Motorbike Adventure is going to feature magical creatures and Hagrid. There's an animatronic version of the half-giant, with new dialogue from Harry Potter actor Robbie Coltrane, and a number of creatures, including a unicorn.

Does this all sound worth waiting in a 10-hour line for? That probably depends on whether you're a theme park lover and a massive Harry Potter fan. So far, the reviews for the ride are very, very positive, with people calling it the best ride at the park or even the best roller coaster they've ever been on. For now, if you'd like to take a closer look, this POV video uploaded by The Potter Collector on YouTube will let you know what you'll be getting into if you ever visit. (It also might make you a little dizzy.)