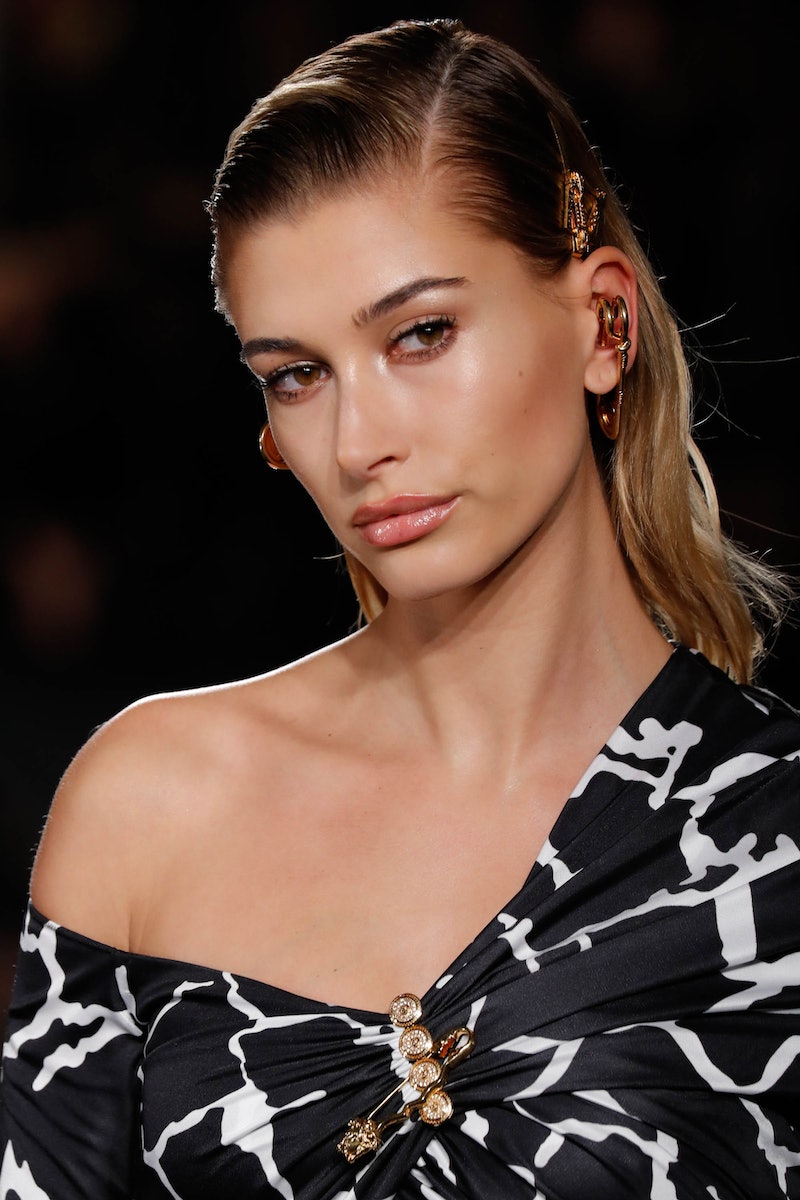 Sometimes you don't know you want to color your hair a certain hue until a celebrity does it. Hailey Baldwin's latest style will have you feeling Coachella ready thanks to its unconventional shade. Hailey Baldwin has neon yellow hair, making highlighter chic a thing this summer season.

The model debuted the bold look on her Instagram Stories, rocking intense yellow hair with one-inch dark roots. Her blunt bob was styled into a wavy and wet look. The gelled waves turned piece-y around her face, helping to accent the black roots of her hair. The look was intense and daring, making it perfect for festival season.

Seeing how it is Coachella season right now, it wouldn't come as a shock if Baldwin changed her hair for the festival. Just last year, A-listers like Kylie Jenner and Victoria Secret Angel Lais Ribeiro were posting their hair transformations around this time. Jenner had a waist-length hot pink wig on, while Ribeiro got violet streaks in her long locks.

Seeing how festival season is all about getting colorful hair, Baldwin's neon yellow look would fit right in. But seeing how Baldwin has naturally light brown hair, the black roots weren't her natural color. This indicates that the style was a wig. And as it turns out, the model got it for an upcoming campaign.

The photo was taken during Baldwin's Adidas shoot, who she is both the face and style creator for. Baldwin is Adidas' first ever style creator, where she is the lead creative voice across select Adidas Originals women’s campaigns. That could mean that she styled this very shoot herself, neon hair and all.

In the photo, Baldwin is crouching on the floor wearing Adidas joggers. Her hairstylist, Florido Basallo of Nine Zero One Salon in Los Angeles, is standing over Baldwin, spraying her hair with water. Basallo is a celebrity hairstylist, and has A-listers like Liv Tyler, Vanessa Hudgens, and Zac Efron on his roster.

Basallo also posted a photo of the shoot on his own Instagram, with the caption, "f*ck it up if it's ur birthday bishh." It was Basallo's birthday that day, and he spent it creating a neon look for Baldwin.

While the hairstyle was a wig, this isn't the first time that Baldwin has rocked non-natural hair. Baldwin died her hair pink both in 2018 and in 2019. In May 2018, Baldwin colored her hair pink for the Met Gala. The theme was Heavenly Bodies, and the model appeared wearing a white, flowing gown and white flower crown. She added the unexpected pink pastel shade to add a bit of edge to the angel-like look.

In 2019, Baldwin returned to the pastel shade in January. Just like during her previous look, the pink bob had natural brown roots, as well as brown highlights peeking throughout the style.

Baldwin is a hair chameleon, even if the neon look was just temporary. But even though it was just a wig, the florescent bob is still great hair inspo for the summer.