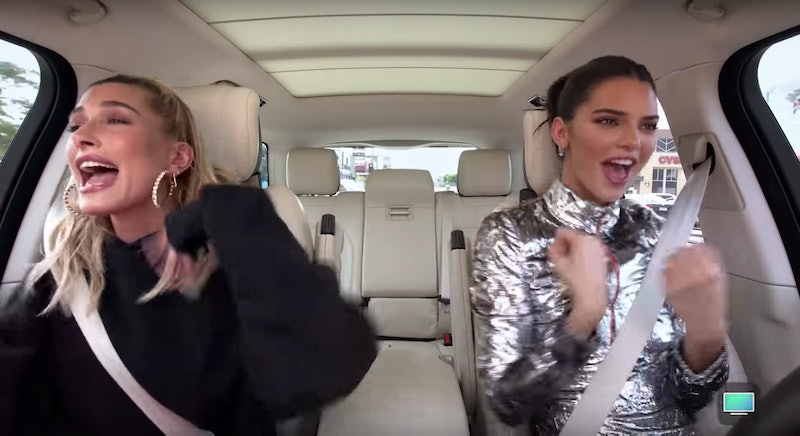 Hailey Baldwin and Kendall Jenner star in the latest episode of Apple TV's Carpool Karaoke — but they're not the only ones who are in the car. Baldwin and Jenner's Carpool Karaoke segment is bombed by none other than Miley Cyrus, and the song they're using for the sing-along is so fitting.

After a cute montage of various jokes about how close Jenner and Baldwin are, there are a few scenes of them singing along to various popular songs, like Panic! At The Disco's "I Write Sins Not Tragedies." When the two get to "Party In The USA," Cyrus herself pops up in the backseat and joins in.

The surprise video-bomb is even funnier when you remember that Cyrus herself seems to have a love-hate relationship with "Party In The USA." At a 2011 party in Chicago, Cyrus reportedly asked that the song not be played that night, according to Page Six. (She also said in 2009 that she'd "never heard a JAY-Z song," according to MTV, even though her hearing one of the rapper's songs is a key "Party In The USA" lyric.)

But these days, it looks like Cyrus has gotten used to the fact that it will always be one of her most popular songs. And at least she's clearly having a good time singing it with Baldwin and Jenner in the new clip.

In the rest of the video, Baldwin and Jenner jokingly follow the show's "Guide to Maintaining a Strong Friendship." There's no mention of Baldwin's new husband, Justin Bieber, in the trailer, but it does make the joke a lot more timely. It can be difficult to maintain the same closeness in outside friendships after getting married, but the two models look like their relationship is doing just fine.

Some of the so-called guidelines the two of them follow in the clip include creating a "secret handshake" and taking a lie detector test, because friends should be truthful with each other. Of course, lie detector tests and handshakes are hardly the components of successful friendships, but it's still a fun clip. (And if you're interested in the rest of the episode, it's available through the Apple TV app.)

Baldwin may be undergoing some major life changes, but it's clear that she and Jenner will always be there for each other. Back in September, Jenner shared some sweet comments about Baldwin and Bieber's engagement, and her words show just how much she supports her friend.

"Whatever makes them happy, I'm happy," Jenner said during an appearance on The Tonight Show Starring Jimmy Fallon. "I've been friends with both of them for a very long time. So if everybody's happy, it makes me happy."

Jenner and Baldwin's friendship goes back years — the two of them even have matching tattoos. They definitely don't need Carpool Karaoke's so-called "Guide to Maintaining a Strong Friendship," but it does make for a pretty entertaining video. And it's nice to see that Cyrus is in on the fun, too.