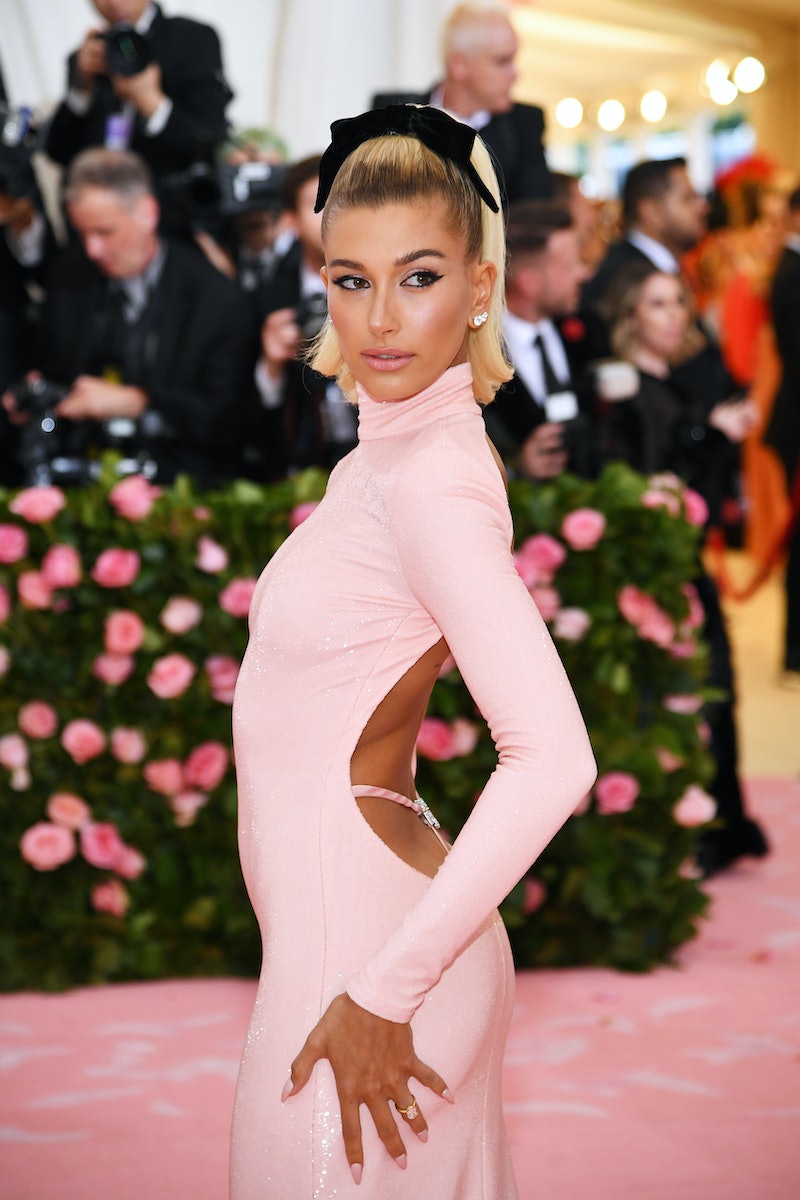 In just a few short days, she'll reportedly become Mrs. Bieber again, this time in front of family and friends. Since she didn't throw down prior to her courthouse nuptials last year, Hailey Baldwin had a bachelorette party on Wednesday, Sept. 26, People reported, and it was totally typical in the best possible way. (Plus all the famous friends, of course.)

Baldwin and Bieber tied the knot for the first time on Sept. 13, 2018 at a courthouse in New York City. Based on reports, it was a quiet, private affair — super private, as in it might've just been the two of them plus the court officials — but now, they're finally ready for a bigger blow-out. According to a source for TMZ, the two stars will be walking down the aisle (again) on Sept. 30 in South Carolina. To commemorate her last week as a single lady — even though she's already technically married — Baldwin decided to have one last hurrah with her girlfriends in Los Angeles.

Baldwin totally looked the part of a blushing bride-to-be with a white dress and veil while celebrating at a few hot spots around L.A., which included dinner at Ysabel and drinks at Delilah nightclub. A source told People, "The group was in a wild, happy mood. You could tell Hailey was very excited to celebrate with her friends. She was all smiles."

One of the attendees at Baldwin's bash was Kendall Jenner, who was apparently in charge of picking out gag gifts and party favors. A source spotted Jenner at adult store Hustler Hollywood earlier that day and told People, "She was laughing as she picked up classic bachelorette suppliers, including phallic-shaped straws and sex toys." At one point in the night, TMZ got a shot of Jenner enjoying a penis-shaped sippy-cup with a penis-shaped straw, and Baldwin could not stop cracking up. Jenner also appeared to be wearing a penis-adorned candy necklace — she clearly went all out on her shopping excursion.

Even though Jenner helped plan Baldwin's bachelorette, it's unclear whether she'll actually be in the wedding. So far, all we know for sure is that Baldwin's sister Alaia and cousin Ireland are in the wedding, since her aunt Kim Basinger spilled that detail to Us Weekly last summer.

After Mr. and Mrs. Bieber legally got married last September, People reported they were planning on tying the knot yet again with "a big blowout, in front of God and everyone they love." Since then, there have been several rumors as to when their second wedding would actually take place, but now it seems like their big day has finally arrived, according to a photo of a save-the-date recently obtained by TMZ. An insider told E! News they've chosen the Montage Hotel in Palmetto Bluff, S.C. as the venue, and the "decor is going to be very chic and neutral. Hailey wants all white and champagne-colored decor with beautiful green foliage," the source added. "It's going to be classy."

During a recent interview with Vogue Australia, Baldwin opened up about being a newlywed, nearly one year after she and Bieber made things official. "Look, marriage is always going to be hard and I think good relationships are the relationships that you put the work into," she told the outlet. "Now it’s easier, because we’ve found a rhythm. We have more fun together, which is what should happen when you spend more time with someone you love."

That being said, it's probably safe to assume Baldwin will leave all her penis-shaped bachelorette party favors at home for the big day, and find other ways to celebrate with Bieber and her family and friends. If not, though, those accessories will definitely make for some entertaining pics from the reception.