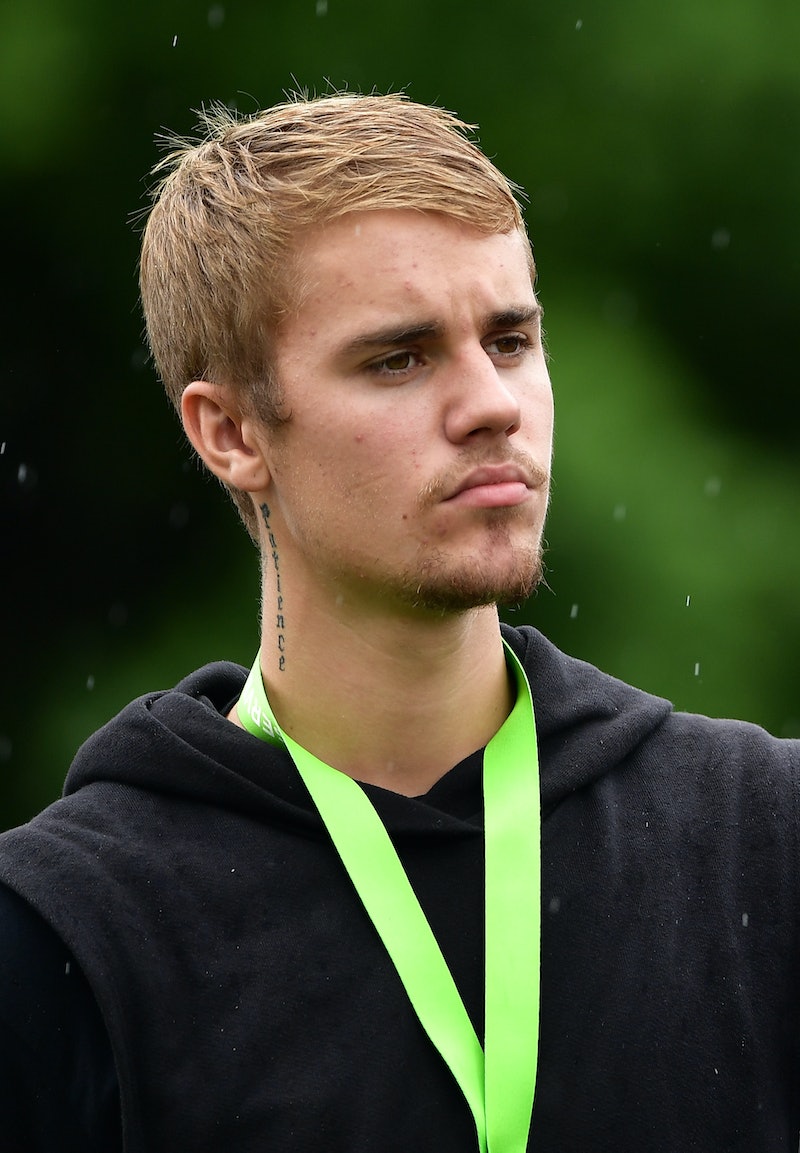 The countdown is on for Justin and Hailey Bieber's upcoming wedding. There have been reports and rumors, but neither of them have shared any details... until now. Well, sort of. Hailey and Justin Bieber's wedding update includes jokes about his tuxedo options. So, yes, that's not an actual update on the wedding, but it was entertaining nonetheless.

On Sept. 26, the singer shared a series of photos with some wedding outfit possibilities on Instagram. He captioned the photo, "Help me choose a tux for my wedding. It’s between these three." The first one pictured was a pink suit complete with a matching top hat. The second option showed a rainbow tuxedo. The third was a black shorts and T-shirt ensemble. Hailey commented on the post by saying, "I like the last one personally."

Bieber posted a second set of photos on Instagram and wrote "Help me choose my tuxedo for the wedding here are two more options." He added a blue suit with a banana print and a white tux with red blood-like splatters to the mix. Hailey did not comment on this selection... yet. However, a lot of fans did weigh in on both posts. One person chose the shorts and t-shirt combination, pointing out "You'll be ready for the after party without even changing." Another fan commented, "Actually wear any of them. You can make it work." A different Instagram user wrote, "Don't choose. Take them all!!"

Seemingly, Justin was joking about the wardrobe possibilities, but fans will have to wait until wedding photos emerge to be sure. Earlier this week, Hailey had her bachelorette party in Los Angeles. She wore a white dress, of course, and a necklace that said "Bieber" while she and friends, including Kendall Jenner, sipped drinks out of phallic-shaped cups, in photos shared by TMZ. The couple hasn't publicly confirmed any wedding details themselves, but TMZ reportedly got a hold of their save the dates. The cards feature comic book-like drawings of the couple and the message "September 30th 2019 South Carolina."

And this wouldn't actually be the first time that the Biebers attempted to have a wedding ceremony. In January, TMZ reported that Hailey and Justin canceled a Los Angeles wedding that was supposedly set to take place in March. The Biebers are already legally married — Justin and Hailey tied the knot in a civil ceremony on Sept. 18 2018 in New York City. The couple got engaged in July 2018 during a vacation in the Bahamas.

The couple's relationship has progressed throughout a whole decade. Hailey and her dad Stephen Baldwin met Justin at an event in 2009. Rumors of a romance brewed in November 2014 when Daily Mail shared photos of them out on the town in New York City. In December 2014, Hailey denied the speculation, telling E! News, ""I've known him since I was so young — since I was like 13 — and we've just been good friends over the years. We have just stayed close and there's nothing more to it than that." Soon after, the two of them celebrated New Year's Eve together They also spent NYE together the following year, that time with Justin's family.

In June 2018, Us Weekly shared photos of Justin and Hailey holding hands in Miami, fueling speculation that they were dating and just a month later they got engaged. While Justin and Hailey are very well-known people, they have been pretty private about their relationship and wedding plans — minus the public poll about the tuxedo selection, that is.

More like this
Jane Lynch Revealed Why She’s Leaving 'Funny Girl' After Lea Michele Was Cast
By Grace Wehniainen
Who Is Camila Cabello Dating? She's Getting Cozy With Lox Club CEO Austin Kevitch
By Radhika Menon
Taylor Swift & Her Mom Clap Back Against The “Shake It Off” Plagiarism Lawsuit
By Jake Viswanath
'Euphoria' Star Jacob Elordi Reveals Why He Almost Quit Acting
By Radhika Menon
Get Even More From Bustle — Sign Up For The Newsletter