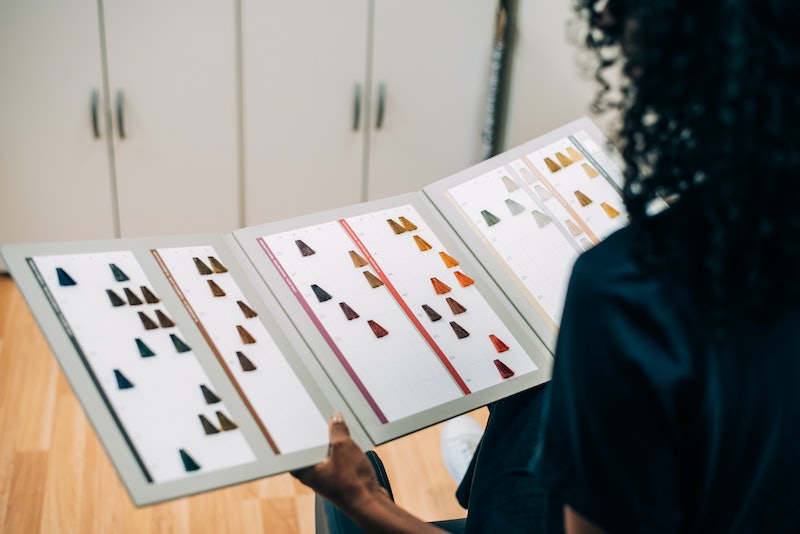 For Black women, maintaining a hairstyle is about so much more than getting it cut and blown out. In addition to navigating social pressures to keep your hair natural or straighten it, a new study says those choices could lead to health issues. Permanent hair dye and relaxers may be linked to higher rates of breast cancer, especially among Black women, NPR reports.

Hair relaxers that chemically straighten your hair and permanent dyes that are also chemical-based can lead to greater risk the more often you use them, according to the National Institutes of Health (NIH). The NIH reports this conclusion based on a study published in the International Journal of Cancer, which studied the hair care habits and cancer rates of nearly 50,000 women, 9% of whom were Black. The study concluded that women who relax their hair every five to eight weeks are 30% more likely to develop breast cancer than women who don’t. And since Black women are more likely than white women to use relaxers, the study found that the rates of breast cancer were higher for Black women — 60%, compared to 8% for white women.

Permanently dyeing hair, too, increases women’s risk of developing breast cancer. The study found that women who permanently dyed their hair the year before the data were collected had a 9% increased risk of cancer compared with those who didn’t use permanent hair dye. When Black women used these permanent dyes every five to eight weeks, the study found that they were 60% more likely than women who didn’t use these dyes to get breast cancer. Semi-permanent and temporary dyes, however, had no effect on breast cancer rates, according to the study.

Like so many medical issues, the higher rate of cancer among Black women has a strong basis in structural and societal racism. Black women face an immense amount of pressure to have “good hair” — AKA hair that is relaxed or, if worn naturally, with a loose curl pattern.

Racist discrimination surrounding Black women’s hair is felt daily by women whose natural hair is deemed unattractive and unprofessional, at the same time as Black women’s hair care products and knowledge are less accessible and more expensive than those marketed to white women, according to a 2017 study published by the Perception Institute. Discrimination against people who wear their hair naturally extends into employment, as well. According to a 2015 study published in the journal Frontiers in Psychology, Black employees who wear their hair naturally were consistently less likely to be given positive job reviews than candidates who wore their hair in ways that fit Eurocentric beauty standards. The study also found that Black women’s hair was mentioned in job evaluations as being an unprofessional assertion of dominance, where similar comments were not made about white women’s hair.

This pressure is now linked with tangible health risks, which themselves are exacerbated by structural racism. There is a large racial disparity between the medical care provided for Black and white women with breast cancer, according to a 2016 study published in the journal Plastic and Surgical Reconstruction. Black women and other women of color with breast cancer are overwhelmingly less likely to receive preventative screening and attentive physicians who listen to and address Black women's health concerns both before and after their diagnoses, a 2019 study published in the Journal of Cancer Survivorship found.

Even when women do choose to relax or dye their hair, the medical industry is often not much help to Black women experiencing problems with their physical and mental health. This new study provides yet another way that white standards of beauty are damaging to the health of Black women. It's important to keep in mind before any trip to the salon.

Eberle, C.E. (2019) Hair dye and chemical straightener use and breast cancer risk in a large US population of black and white women. International Journal of Cancer, https://onlinelibrary.wiley.com/doi/abs/10.1002/ijc.32738.

More like this
6 Asian Beauty Rituals That Will Soothe Your Skin, Scalp & Mind
By Jennifer Li
11 Mid-Length Haircut Ideas To Inspire Your Next Salon Visit
By Carolyn Steber
Blake Lively Debuts Red Hair For The 'It Ends With Us' Film Adaptation
By Olivia Rose Rushing
The Best Beauty Looks Spotted At Paris Couture Week 2023
By Audrey Noble
Get Even More From Bustle — Sign Up For The Newsletter
From hair trends to relationship advice, our daily newsletter has everything you need to sound like a person who’s on TikTok, even if you aren’t.