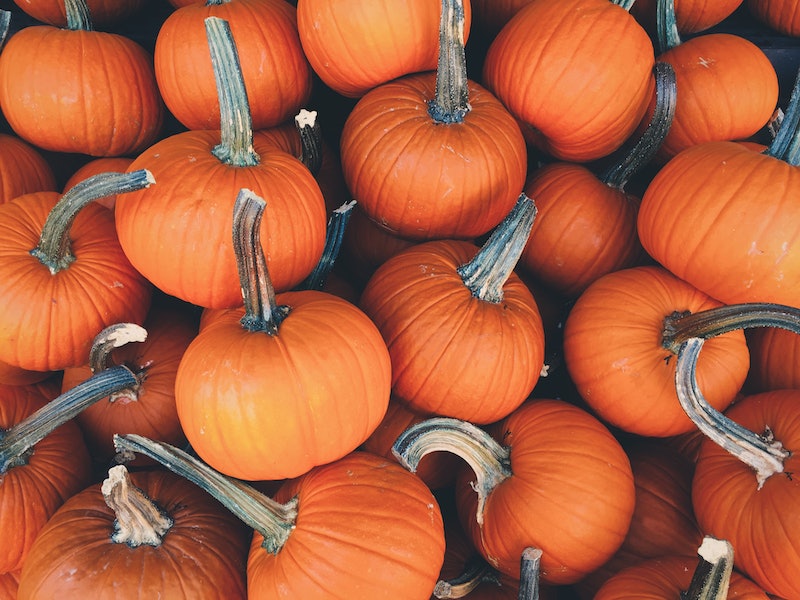 Let me preface this by saying one thing: I don't not want to see pictures of your Halloween costume on Facebook. I totally do. I know you probably took a lot of time to come up with the perfect creative outfit to rock with your best friend. And even if you didn't take a lot of time and the whole thing was actually pretty last-minute, I know the costume is going to be great. If your 2017 costume is on the DIY side, I'm sure the photos will be especially impressive. I really do want to see your costume. That being said, I'm just wondering if we can all commit to getting a bit more creative with our social sharing this Halloween. Like, what about checking out som Halloween poems to share on Facebook in celebration of the holiday?

This is a pretty awesome holiday we're talking about here, steeped in history and creepy folklore. There's tons of seasonal content out there, as ripe for sharing as a pumpkin on Oct. 29, and it will be the perfect compliment to the forthcoming barrage of costume photos that I fully expect to see on Nov. 1. Plus, celebrating Halloween by sharing this kind of content means that you can participate in the Facebook holiday fun even if you're not so into dressing up.

Check out these Halloween poems, all of which would be perfect for your Facebook feed this month.

"You heap the logs and try to fill

The little room with words and cheer,

But silent feet are on the hill,

Across the window veiled eyes peer.

The hosts of lovers, young in death,

Go seeking down the world to-night,

And they shall seek till it is light.

Lest those who drift before the storm

See gladness on our hearth and know

There is no flame can make them warm."

This poem does a pretty flawless job of establishing just the kind of eerie, lonely Halloween mood that kept me up at night as a kid for the whole month of October.

Spirits Of The Dead

"Thy soul shall find itself alone

Not one, of all the crowd, to pry

Into thine hour of secrecy.

Be silent in that solitude,

Which is not loneliness — for then

The spirits of the dead, who stood

In life before thee, are again

In death around thee, and their will

Shall overshadow thee; be still.

The night, though clear, shall frown,

And the stars shall not look down

From their high thrones in the Heaven

But their red orbs, without beam,

To thy weariness shall seem

As a burning and a fever

Which would cling to thee for ever.

Now are thoughts thou shalt not banish,

Now are visions ne’er to vanish;

From thy spirit shall they pass

The breeze, the breath of God, is still,

And the mist upon the hill

Is a symbol and a token.

How it hangs upon the trees,

A mystery of mysteries!"

No one does scary quite like Edgar Allan Poe, and this creepy poem is no exception. "The spirits of the dead, who stood in life before thee, are again..." Feel those shivers up your spine?

Bark of wizard hazel-wand, berry of the bay,

Let the fairy gifts of you mingle with the spell,

Guard the precious life and soul of him that’s far away!

Morsel of his native earth, shoot of mountain pine,

Lend his arm the strength of you, let his eye be true,

Send him like the thunderbolt to break the foeman’s line!

Airy waft of thistledown, feather of the wren,

Bring him peace and happiness, let his dream be sweet,

Take my secret thought to him and call him home again!"

More recipe than poem — though I'm not sure bark of wizard hazel-wand or thorn slip sound like particularly delicious ingredients to anyone — "Halloween Charm" makes it easy to imagine what it might look like to watch someone brought back from the dead.

"In night when colors all to black are cast,

Distinction lost, or gone down with the light;

The eye a watch to inward senses placed,

Not seeing, yet still having powers of sight,

Where fear stirred up with witty tyranny,

Confounds all powers, and thorough self-offense,

Such as in thick depriving darknesses,

Proper reflections of the error be,

Which hurt imaginations only see;

And from this nothing seen, tells news of devils,

Which but expressions be of inward evils."

Even in the dark when dangers are hard to see, you still know they're there. Call it your intuition, your witch vibe, or something else — but you've got it!

"Two things I did on Hallows Night:—

To the ghosts of the year.

Then one came in. Across the room

It stood up long and fair—

The ghost that was myself—

And gave me stare for stare."

Sometimes, the scariest things of all are directly in front of us — or, worse, already within us. (Thanks for the reminder, poem!)

"A ghost, though invisible, still is like a place

your sight can knock on, echoing; but here

within this thick black pelt, your strongest gaze

will be absorbed and utterly disappear:

just as a raving madman, when nothing else

can ease him, charges into his dark night

howling, pounds on the padded wall, and feels

the rage being taken in and pacified.

She seems to hide all looks that have ever fallen

she can look them over, menacing and sullen,

and curl to sleep with them. But all at once

as if awakened, she turns her face to yours;

and with a shock, you see yourself, tiny,

inside the golden amber of her eyeballs

Black cats are pretty much the OGs of superstitions, but this poem gives a totally new dimension to them. If spotting a black cat late at night didn't freak you out before, it probably will now. Sorry!

"I spot the hills

With yellow balls in autumn.

I light the prairie cornfields

And I am called pumpkins.

On the last of October

When dusk is fallen

And circle round me

And love to the harvest moon;

I am a jack-o’-lantern

And the children know I am fooling."

Jack-O'-Lanterns represent the kinder, softer side of Halloween — at least, I thought they did, until I read this poem and learned of the evil lurking inside them.

"Gloomy and bare the organ-loft,

Bent-backed and blind the organist.

From the pipes’ tuneful company,

The ghosts of long-dead melodies,

Of Kyries shrill and tremulous:

They huddled there in harmony.

If you've ever wondered what a chorus of ghosts sounds like, your Facebook pals probably have too. Robert Graves tries to explain it to all of us here.

"Although it no longer has a body

to cover out of a sense of decorum,

the ghost must still consider fashion—

must clothe its invisibility in something

if it is to “appear” in public.

a toga of ectoplasm

While others opt for lightweight versions

of once familiar tee shirts and jeans.

they can change their outfits instantly—

or if they were loved ones,

it is we who clothe them

A sillier take on Halloween poetry, "Ghosts and Fashion" has me sitting here imagining what my entire wardrobe would look like on a Casper lookalike.

"All houses wherein men have lived and died

Are haunted houses. Through the open doors

The harmless phantoms on their errands glide,

With feet that make no sound upon the floors.

We meet them at the door-way, on the stair,

Along the passages they come and go,

Impalpable impressions on the air,

A sense of something moving to and fro.

There are more guests at table than the hosts

Is thronged with quiet, inoffensive ghosts,

As silent as the pictures on the wall.

The stranger at my fireside cannot see

The forms I see, nor hear the sounds I hear;

He but perceives what is; while unto me

All that has been is visible and clear.

We have no title-deeds to house or lands;

Owners and occupants of earlier dates

And hold in mortmain still their old estates.

The spirit-world around this world of sense

Wafts through these earthly mists and vapours dense

Our little lives are kept in equipoise

By opposite attractions and desires;

The struggle of the instinct that enjoys,

And the more noble instinct that aspires.

These perturbations, this perpetual jar

Of earthly wants and aspirations high,

Come from the influence of an unseen star

An undiscovered planet in our sky.

And as the moon from some dark gate of cloud

Throws o’er the sea a floating bridge of light,

Across whose trembling planks our fancies crowd

Into the realm of mystery and night,—

So from the world of spirits there descends

A bridge of light, connecting it with this,

O’er whose unsteady floor, that sways and bends,

Wander our thoughts above the dark abyss."

If we're to believe Henry Wadsworth Longfellow's theory of haunted houses, it's time to stop wondering whether or not your home is occupied by spirits of a previous life — because all homes are.

"A fair witch crept to a young man’s side,

And he kiss’d her and took her for his bride.

But a Shape came in at the dead of night,

And fill’d the room with snowy light.

And he saw how in his arms there lay

A thing more frightful than mouth may say.

And he rose in haste, and follow’d the Shape

Till morning crown’d an eastern cape.

And he girded himself, and follow’d still

When sunset sainted the western hill.

But, mocking and thwarting, clung to his side,

The only thing worse than a bridezilla? A witch-bride.

Macbeth, Act IV, Scene I (Round About The Cauldron Go)

"Round about the cauldron go;

In the poison’d entrails throw.

Toad, that under cold stone

Days and nights hast thirty one

Boil thou first i’ the charmed pot.

I know you remember this one from high school English class. Give your social network a Shakespeare refresher with a few lines out of this classic scene from Macbeth.